Thousands of opponents of socialist convicted felon President Luiz Inácio Lula da Silva stormed his offices and the headquarters of the Congress and Supreme Federal Tribunal (STF) of Brazil on Sunday, reportedly demolishing the facades of two of the three buildings and causing “irreparable” damage to priceless artifacts in the chambers.

The riot in Brasilia occurred while Lula himself was in Sao Paulo state assessing the damage of recent floods. Lula, in a public statement following police action to subdue the protesters, announced an official “federal intervention” in Brasilia – consolidating the public security powers of several agencies into the hands of a hand-picked, top-level official – and accused police of acting in “bad faith” in failing to prevent the protesters from storming the buildings.

The incident is an offshoot of months of protests following the October presidential election that saw Lula narrowly defeat then-incumbent President Jair Bolsonaro in two rounds of voting. Most protesters support Bolsonaro but, more broadly, oppose Lula’s victory as illegitimate on several grounds, including his multiple convictions on charges of corrupt acts occurring during his first two terms as president. An audit of the 2022 runoff presidential election, which featured only Bolsonaro and Lula as candidates, by the Armed Forces of Brazil concluded that no guarantee could be made of the absence of fraud or irregularities.

Protesters also accuse the STF, particularly its head justice Alexandre de Moraes, of intervening in the election by censoring mentions of Lula’s corruption case and silencing Bolsonaro supporters through fines and police raids.

Many of the protesters convening in Brasilia on Sunday are part of a movement demanding that the nation’s military oust Lula. They insist that their demand is not for a coup d’etat, but for a “military intervention” they say the Brazilian constitution provides for in the event of an illegitimate election. 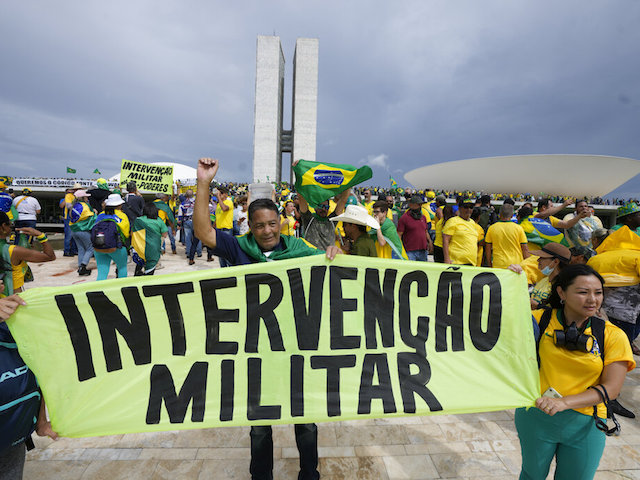 Some protesters shared videos on social media during the event on Sunday urging the military to “save us from communism.”

The Brazilian news network Jovem Pan reported that what began as a peaceful protest on Sunday against Lula veered out of control as “nearly 100” buses from around the country drove into the capital, overwhelming the number of police in the streets. The protesters tore down a barricade keeping them off of the Congressional building’s esplanade and climbed atop it, storming its roof while hundreds of others destroyed the glass facade below. The mob succeeded despite police attempting to hold back the wave of people with tear gas.

The protesters reportedly chanted slogans such as “Brazil is ours!” 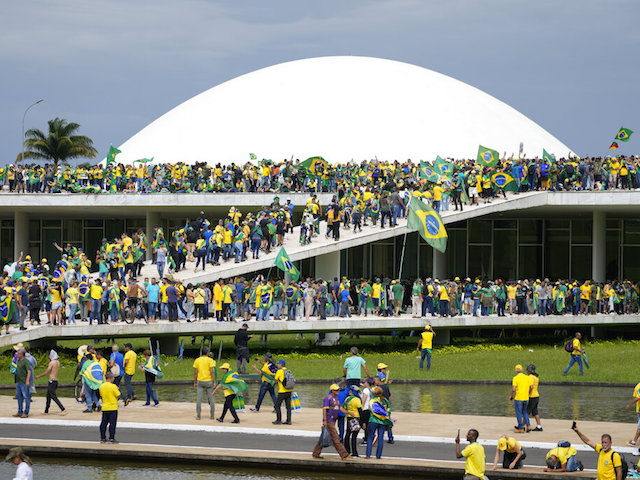 Once in the building, protesters set part of the Congress on fire, and destroyed several offices. Authorities have not yet at press time estimated the total damage to the building, though multiple Brazilian news outlets have cited eyewitness accounts to conclude it was significant.

At the STF, the nation’s top court, Jovem Pan documented shouts of “break everything, people!”

The STF is a target of particular hatred from Brazilian conservatives due to its use of censorship powers against Bolsonaro supporters. Minister [Justice] de Moraes – who also ran the Superior Electoral Court (TSE), which administers elections, last year – presided over a “fake news” probe that resulted in violent police raids against comedians, Youtube commentators, and journalists in 2020 for having publicly supported Bolsonaro. De Moraes also presided over the arrest and sentencing of former Congressman Daniel Silveira to eight years in prison for having insulted STF ministers in a youtube video; Bolsonaro pardoned Silveira last year.

According to Jovem Pan, one protester “tore the door off of Minister Alexandre de Moraes’ office … and took it outside.”

The left-leaning Brazilian newspaper O Globo described the damage to the STF building and its “historical heritage” as “irreparable.” In addition to de Moraes’ door, the protesters destroyed several busts of former top court justices, potentially hundreds of years old, as well as other historically significant artwork and the main chamber where the STF conducts is businesses.

In front of Planalto, the presidential palace, protesters clashed with police on horseback, who kept them from inflicting major damage to the building. 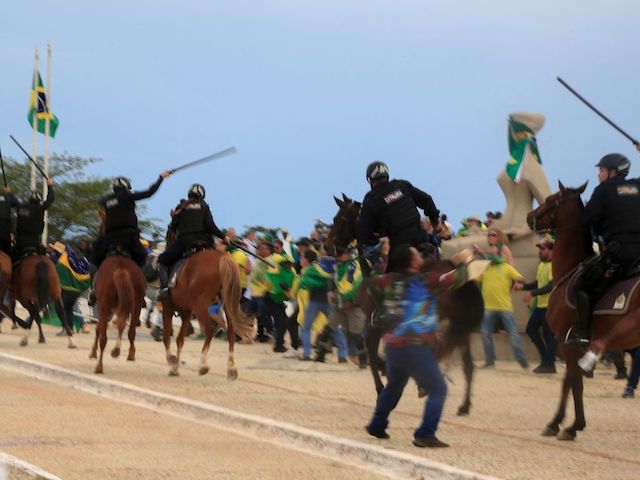 Jovem Pan reported claims that the police used a helicopter to fire warning shots at protesters, though other outlets have not confirmed that report.

The reports of clashes with police coexist with reports of police engaging in friendly, apparently supportive conversation with some protesters. In one video surfacing online, according to O Globo, protesters claimed police were affirming to them that they support the anti-Lula movement. The video shows officers speaking to protesters, but their conversation is not audible.

Journalists also captured some dramatic moments of protesters apparently coming to the aid of an officer in a clash with other protesters. 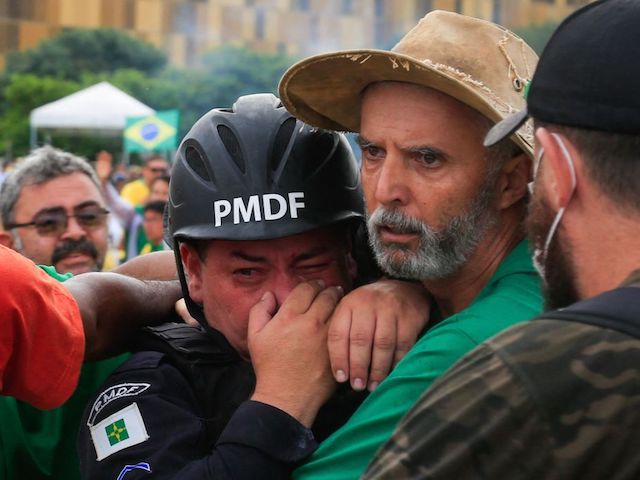 Supporters of Brazilian former President Jair Bolsonaro assist a Military Police officer during clashes after an attempt to invade the Planalto Presidential Palace in Brasilia on January 8, 2023. (SERGIO LIMA/AFP via Getty Images)

Lula was not in Brasilia on Sunday. He was in Araraquara, Sao Paulo state, on a reportedly pre-planned trip to assess the damage of recent flooding. In a press conference before his departure back to the capital on Sunday night, Lula condemned the police and security officials for not preventing the breaches.

“You must have followed the barbarism in Brasilia today,” Lula wrote to his audience on Twitter, in comments paraphrasing his speech from Sao Paulo. “Those people we call fascists, the most abominable thing in politics, invaded the palace and Congress. We think there was a lack of security.”

In his actual remarks, according to the BBC, Lula claimed police “did absolutely nothing” to protect the capital and accused them of “bad faith.”

Lula announced an official executive decree “intervening” in Brasilia Federal District (DF), appointing an official public security czar for Brasilia that now has the power to consolidate various security agency powers and override Brasilia officials. The powers are in effect through January 31.

Jair Bolsonaro has not commented on the protests at press time. He is believed to be in Florida, where locals have sighted him perusing local businesses in the past week.

Bolsonaro surfaced on social media today to boast of his administration’s infrastructure record, without addressing the protests or Lula.

“Peaceful protests, according to the law, are part of democracy. However, destruction and invasion of public buildings like those that happened today, just as those committed by the left in 2013 and 2017, are out of line,” he wrote, referring to past leftist riots. “Throughout my mandate [presidency], I was always within the confines of the constitution, respecting and defending the law, democracy, transparency, and our sacred liberty.”

“In addition, I repudiate the accusations, without proof, attributed to me on the part of the current chief executive of Brazil,” he concluded, referring to Lula blaming Bolsonaro in part for the events of Sunday.