Moms United for Black Lives threatened the Portland, Oregon, suburb of Lake Oswego. The group warned, “We are going to f*ck sh*t up in Lake Oswego” in a poster distributed in the Portland area.

Moms United for Black Lives distributed flyers threatening to “f*ck sh*t up in Lake Oswego” on Sunday. Lake Oswego is one of the wealthiest suburbs surrounding the Portland area, according to SkyBluePortland.com.

BLM-antifa are promoting this event for Sunday, 25 Oct. in Lake Oswego, a wealthy suburb near Portland. #antifa pic.twitter.com/tzOXoGRyDO

Residents of Lake Oswego expressed concern about the flyers in a Facebook post on the Clackamas County Crime Stoppers page.

“This poster doesn’t sound like a protest march but vandals and thugs who aren’t interested in protest, but in destruction,” Lake Oswego pub owner Kari Mitchell said in a Facebook post. “Who is organizing such an “in your face” demonstration? I am going to board up my pub on A Street and wanted to warn others!” 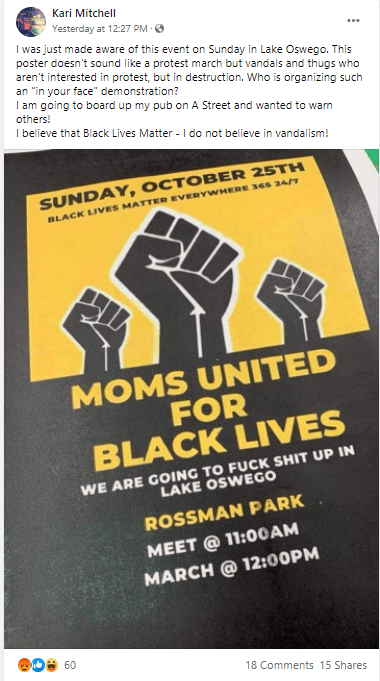 One responder asked, “What does this mean?”

Another woman responded, “it means they don’t give a shit about BLM, they care about getting attention for themselves!!! They couldn’t give two shits about any life’s!!”