A transgender man, who was born as a woman, is suing a privately-owned California ‘men’s only’ barbershop for allegedly refusing to cut his hair based on his perceived gender.

“After I entered I was greeted and denied services due to my gender and on account of what the barbers perceived to be my gender,” Rose Trevis said Tuesday, in a prepared statement. Rose said he “felt humiliated, discriminated against and frowned upon” as a result.

Renowned feminist lawyer Gloria Allred is representing Rose in this case. In the complaint, Allred described her client “Rose [as] a transgender male with a masculine transgender expression.” 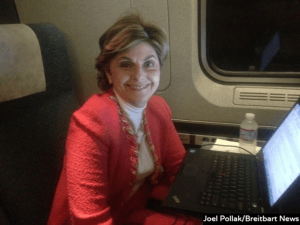 Rose had entered Hawleywood’s Barber Shop & Shaving Parlor in Long Beach, one of three privately-owned locations in Southern California, on March 4 with his domestic partner, Laura Lozano. He was allegedly told that the barber shop only accepts haircuts with appointments and, after allegedly being given a second look by one of the barbers, told that the shop does not service women.

On their website, Hawleywood’s presents itself as a “men’s sanctuary,” noting “One thing you won’t see at Hawleywood’s is women. You all know how distracting a woman can be and who wants a straight razor shave with a buxom blonde in the joint?”

The legal case alleges that at one point during the exchange a barber who worked at the shop stated “We don’t cut women’s hair and women are not even allowed in the shop!”

Allred is seeking an injunction mandating the barber shop eliminate its alleged policy and practice of discriminating on the basis of gender and perceived gender. If successful, the barbershop, specifically and solely created to service men, will likely be required to service female clients as well.

Hawleywood’s attorney Bryan Kazarian provided a press release to Breitbart News stating “an appointment was scheduled for a time the next business day” and wrote that the private business establishment was “not aware of any discrimination that has been alleged to have taken place.”

However, in an interview with Breitbart News on Wednesday, Allred denied this claim.

He never received an appointment. But if Hawleywood’s is saying that they do not discriminate against women or transgender patrons, then they should have no problem with agreeing to our request for a court order, in other words an injunction, mandating that they serve any customer, regardless of gender or perceived gender identity from enjoying equal access to their services. And Hawleywood’s should agree to changing their web page to reflect that change.

Allred is proceeding with the complaint and lawsuit under California’s Unruh Civil Rights Act‘s Civil Code 51 which states:

All persons within the jurisdiction of this state are free and equal, and no matter what their sex, race, color religion, ancestry, national origin, disability, or medical condition are entitled to the full and equal accommodations, advantages, facilities, privileges, or services in all business establishments of every kind whatsoever.

Additionally, Allred is seeking an injunction, or a court order, that will require “Hawleywood’s Barber Shop eliminate its policy and practice of illegally discriminating on the basis of gender or perceived gender and mandating that it stop refusing to provide accommodations or services for those reasons in their place of business.”

In 1987, Allred won a case on behalf of a man who alleged he and other men were discriminated against when California’s “Women Only” spa violated California’s “Unruh Law” by barring him from access based on their gender.

“It makes good economic sense for businesses to serve the public and serve as many customers as possible,” Allred said. “And it’s also in the interest of equal access and opportunity for the public to be able to enjoy the services of a business. So, I think it’s a win-win for both the public and for businesses.