Over at the American Thinker, Professor Paul Kengor recounts the story of the Communist Party USA’s plot for their own version of Southern Secession. Based on information from sources ranging from the FBI to the records of the Comintern (the entity the Kremlin used to control the “official” Communist Parties around the world) to the testimony of black former members of the Communist Party, we learn:

[T]he effort began when the Soviets in 1922 approved a huge $300,000 subsidy to the American Communist Party for purposes of agitation and propaganda among black Americans. Three years later, in 1925, the Comintern selected a small group of 12 black Americans to come to Moscow for training.

That was just a warm-up. In 1930, at a Comintern conference in Moscow, a resolution was passed calling for the creation of a Soviet-directed and controlled “Negro Republic” among America’s Southern states. Yes, that is correct: the Soviet Comintern, working through American communists, actually crafted plans to create a “separate Negro state,” or a segregated “Negro Republic,” in the South. The plan was to foment an African-American rebellion within the South, which would join forces with a workers’ uprising in the North — when the revolution was deemed ripe. Together, black Americans and communist Americans would then occupy and lay siege to the United States, reconstituting the entire nation as a Soviet sister state.

Black Communists in the Soviet Union in the 1930s

This has been known to Cold War historians for a long time, but only recently did we discover when and how the effort ended. Ronald Radosh was probably the first to pick this up over at PJ Tatler in August when the news broke that “the FBI has released the first in a long series of previously classified material—that of the so-called Operation Solo effort.” He explains: “SOLO referred to the secret recruitment of two bitter ex-Communists, Morris and Jack Childs. The Bureau urged them to rejoin the Party, and work within its ranks to feed information to them. Before long, Morris Childs became what in effect was the CP’s Secretary of State, traveling around the world to meet top Communist leaders, including those of both the Soviet Union and China. From his perch, he passed on to the U.S. Government all he learned first hand from Moscow’s top leaders.”

He then tells us a bit about what can be found in the released files:

They contain many gems. One of my favorites concerns the orders from one of the chiefs of the Soviet Politburo, Mikhail Suslov, who tells the comrades that the Party has to give up its thesis that American blacks composed a separate nation and had to fight for the right of self-determination for its majority in the black belt of the South. Suslov, who under Brezhnev would become the chief ideologue of Moscow, told them they cannot make policy based on 30 year old Comintern directives, at a time when American blacks lived in urban areas and were fighting for civil rights and desegregation.

The files themselves are more specific. The discussion took place in a February 10, 1959 meeting during the “Twenty-first Congress of the Communist Party of the Soviet Union” between some of the leaders of the Soviet Union, among them Mikhail Suslov (who, according to documents found by French police in a raid on a Communist hideout in Morocco, had previously been tasked by Stalin to lead the USSR’s effort to stir up trouble in the Middle East) and a CPUSA delegation consisting of Morris Childs and a black Communist Party leader named James Jackson.

After presenting letters detailing all the wonderful things the “various peace movements in the CP, USA” were up to, posing the idea of a “Negro magazine dealing with theoretical questions” (two years later, Jackson would co-found Freedomways, a black political and cultural quarterly, and serve as the managing editor from 1961-86) and asking for $300,000 and health care treatment in the Soviet Union for CPUSA’s aging leaders, Jackson starts complaining about the leadership of the Party’s National Executive Committee (which Jackson had resigned from in 1956 because he felt the Party wasn’t blaming Israel enough for the Suez War – I found his resignation letter in his papers) and says that the Party’s policies toward the “Negro question” need to be updated. 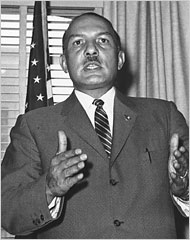 That is when Suslov gives his green light, saying:

Yes, you are correct. Your CP cannot base its theories and policies on resolutions adopted by the Communist International more than thirty years ago. That would be dogmatism. Great changes are taking place among the Negro people. In the past 70 per cent were on or near the lang. Now this is reversed. Seventy per cent of the Negroes are in urban areas of the United States while only 30 per cent are in rural areas. This is certainly a radical change.

If we do not see this change the CP can make terrible, catastrophic or abrupt mistakes. When 70 per cent of the Negroes live in the countryside and contingent territories, and are separated from the white persons — that is one situation. At that time we could talk of self determination. Now however, 70 per cent of the Negroes live in the cities. It is therefore necessary for you to review the situation and the position of the CP on this matter. It is necessary for you to correct your policy.

… How could you place a slogan of self determination when there is no territory? It would be reactionary and utopian to try to bring Negro people back to the soil. It would also be reactionary to place Negro people in ghettos in the cities. We are against ghettos. So your new policy is correct.

The Soviet Union is against ghettos? Interesting, since they had a knack for creating them – and not just in Communist countries. We find out in the files (also first pointed out by Radosh, in a follow on article written in conjunction with John Haynes and Harvey Klehr for the Weekly Standard) that Coleman Young, the long-time mayor of Detroit (1974-1993) who – with the help of his close colleague Carl Levin – turned the city into something resembling the old Eastern Bloc municipalities, was a secret member of the Communist Party. That, of course, coming on top of the fully unionized General Motors, accomplish in 1936 thanks to a violent UAW strike led by Walter Reuther, who was then also a secret member of the Communist Party. (Reuther later saw the light and kicked the Red unions, including that of Pelosi’s hero, out of the CIO in the late 1940s).