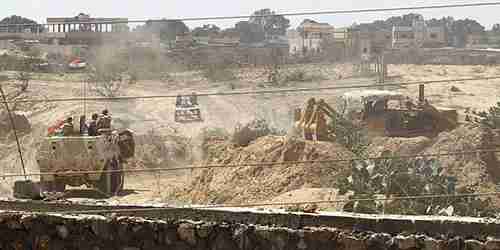 At least 26 people were killed and 105 injured on Thursday in a series of four coordinated terror attacks in Egypt’s northern Sinai. The attacks involved car bombs and mortar rounds. They targeted army and police personnel, but civilians were killed as well.

The terror group “Sinai Province” claimed credit for the attack. The group used to be named Ansar Bayt al-Maqdis (ABM – Ansar Jerusalem – Champions of Jerusalem) and was linked to al-Qaeda, but late last year pledged its allegiance to the Islamic State of Iraq and Syria (IS or ISIS or ISIL), and changed its name to “Sinai Province.”

In October of last year, ABM used a car bomb to kill 33 Egyptian troops in northern Sinai, causing Egypt’s president Abdel al-Fattah al-Sisi to declare a state of emergency in the Sinai peninsula to last three months, with a curfew in force between 5 pm and 7 am. That curfew expired a few days ago, but was renewed for another three months. ( “26-Oct-14 World View — Egypt in state of emergency after terrorist attack in Sinai”)

In addition to declaring a state of emergency, Egypt closed the border with Gaza, and began building a kilometer-wide buffer zone along the border the Gaza. The buffer zone has received a great deal of criticism because it required thousands of Egyptians to leave their homes and relocate. However, al-Sisi may now announce more extreme new measures to combat terrorism. Al Ahram (Cairo) and Reuters

Russia looks to Greece as an ally against EU sanctions

With Greece’s new radical far-left prime minister Alexis Tsipras questioning EU sanctions against Russia over its invasion of Ukraine and annexation of Crimea, Russia is considering financial aid to Greece. According to Russia’s Finance Minister Anton Siluanov, Greece has not yet requested assistance from Russia, but a request would be considered:

Well, we can imagine any situation, so if such [a] petition is submitted to the Russian government, we will definitely consider it, but will take into account all the factors of our bilateral relationships between Russia and Greece, so that is all I can say. If it is submitted we will consider it.

Both Russia and Greece are Orthodox Christian countries, and have a long history of economic and cultural ties, and of course the Nazis invaded both countries during World War II. Almost 13% of Greek imports came from Russia in 2013, according to the IMF. CNBC and CNN

Last week, ethnic Russians in east Ukraine, backed by heavy weapons and possibly thousands of soldiers from Russia, launched an attack on the port city of Mariupol, although so far they have held back from an all-out assault on Mariupol. It is assumed that Russia’s objective is to create a land bridge between Russia and Crimea, the Ukrainian peninsula that Russia invaded, occupied and annexed last year.

In view of this new military attack, the European Union in Brussels issued a statement saying that all 28 EU nations agreed that Russia “bears responsibility” for the attack on Mariupol. On Tuesday, however, the new Greek government issued a statement that

[The EU statement] was released without the prescribed procedure to obtain consent by the member states, and particularly without ensuring the consent of Greece. In this context, it is underlined that Greece does not consent to this statement.

Hungary, Slovakia, and Austria had also voiced objections earlier. These are the countries whose economies are most negatively affected by the anti-Russia sanctions.

The result was an emergency meeting on Brussels on Thursday. Although the Russian sanctions were a completely separate issue from the bailout of Greece, one EU official implied that they might be linked:

You just cannot, on the one hand, demand from Europe to show solidarity with your own country like Mr. Tsipras does and then, as a first official step, split the joint European position.

So Greece’s Finance Minister said on his blog that it was all just a big misunderstanding:

The problem was that [Alexis Tsipras], and the new Greek government, were never asked! So, clearly, the issue was not whether our new government agrees or not with fresh sanctions on Russia. The issue is whether our view can be taken for granted without even being told of what it is!

At Thursday’s meeting, EU extended the existing sanctions on Russian officials until September but, at Greece’s insistence, did not add anyone new to the list of sanctioned individuals. Greece indicated that it was prepared to use its veto to block sanctions in the future. Reuters and Russia Today and Greek Reporter and Kathimerini