Greece heads for further chaos with referendum on Sunday 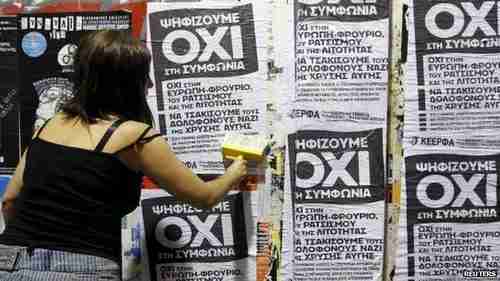 A woman in Athens puts up referendum campaign posters. ‘OXI’ means ‘NO’ in Greek. (Reuters)

On Sunday, Greece will vote in a referendum to choose whether to accept Europe’s last bailout deal, which has already expired on Tuesday and no longer exists. No one has any clue what a YES or NO vote will mean, except that it is essentially a referendum on Greece’s prime minister Alexis Tsipras and his far-left Syriza party.

Alexis has been campaigning non-stop, telling people nonsense — that he guarantees that their pensions and salaries and bank accounts are safe, and that a NO vote will mean that the European creditors will have to back down, and give the Greeks back their dignity, with no more austerity. Others say that a NO vote will mean that Greece will leave the euro currency, and possibly even the European Union.

There have been huge rallies by YES and NO proponents in Athens. Polls show about 44% each for the YES and NO voters, with about 12% undecided.

Another bizarre twist occurred on Thursday, when the International Monetary Fund (IMF) issued a report saying that Greece’s debt situation was far worse than previously reported, and is not sustainable. What’s bizarre about it is that it was good news to Tsipras. According to Tsipras:

Yesterday an event of major political importance happened. The IMF published a report on Greece’s economy which is a great vindication for the Greek government as it confirms the obvious – that Greek debt is not sustainable.

So Tsipras’s message is: “Hooray! The country is totally screwed, which is good for me! Yayyyyyyyy!”

Europeans are worried that if the far left wins in Greece because of this “bad news is good news for me” message from Tsipras, then far left and communist parties in Spain, Portugal and Italy will try the same thing.

If we can put aside Tsipras’s glee for a moment, then to the rest of us it looks like a disaster either way, NAI or OXI. Kathimerini and BBC and Reuters

Thursday’s report by the International Monetary Fund (IMF), described above, is raising questions about the credibility of the IMF and its leader Christine Lagarde.

First, we have to look at how we got here. Long-time readers know that I have been saying from the beginning that there is no solution to Greece’s crisis — not that no solution has been found, but that no solution exists. Other people have said similar things. And I have had lots of fun mocking European leaders who spoke nonsense, especially Jean-Claude Jüncker, who said, When it becomes serious, you have to lie. I’ve certainly had a lot of fun with that.

But the institutional lenders to Greece — the European Commission (EC), European Central Bank (ECB) and International Monetary Fund (IMF), formerly known as the “Troika” — have been engaged in a kind of game with Greece. The Troika would demand austerity reforms, Greece would promise to implement the reforms, another partial bailout payment would be paid to Greece, but then Greece would implement as few of the reforms as possible. The “can would be kicked down the road” for a few months, at which time the process would start again.

When Alexis Tsipras came to power in January, he decided to call the Troika’s bluff, and say: Your method won’t work (because nothing can work), so I’m going to force you to do what I want (which is my far left agenda).

However, the Troika kept up the pretense that there exists a solution to the Greek crisis, and blamed Tsipras for being so unreasonable. But now the IMF report on Greece has undermined the Troika’s pretenses, saying that Greece’s growth is unsustainable. And Tsipras is jumping up and down with glee because, he says, they agree with him.

And that is causing problems for the IMF and Christine Lagarde. If I and other people have known since the beginning that Greece’s debt is unsustainable, and there is no solution to the debt problem, then why did Lagarde not speak up sooner? Was she lying? And why did she waste so much IMF money going to a lost cause?

Inquiring people want to know, and this is just one more element in the unending crisis in the Greece debt story. Australian Financial Review and Reuters

The Shanghai stock exchange index fell 6% on Friday, 10% for the week, and nearly 30% since June 12. The China Securities Regulatory Commission (CSRC) has been desperately trying different measures, such as cutting interest rates and allowing more stocks to be purchased on credit (margin), but the measures have been ineffective.

According to one Chinese analyst, “The government must rescue the market, not with empty words, but with real silver and gold. It’s a disaster. If it’s not, what is it?” What it is — is a huge stock market bubble bursting.

Over 100 million Chinese investors, including many older people who have invested their life savings, have been spending 6 hours a day staring glumly at their mobile phones, watching the stock market index fall, and watching their own savings be destroyed. This feeds into the Chinese Communist Party’s greatest paranoia – a people’s rebellion.

Now the CSRC has set up a team to look at “clues of illegal manipulation across markets.” This should be a laugh. Some poor slob who sold some stocks last week is going to be blamed and sent to jail.

When I wrote last week that, “It’s well to remember that we don’t know to this day what triggered the 1929 panic and crash,” a web site reader wrote to say that Milton Friedman had written extensively about it. Actually, Milton Friedman has written extensively about the 1930s Great Depression, but nobody knows why the stock market panic occurred on the particular day, October 28, 1929, rather than a few months earlier or later.

Wall Street stocks are also in a large bubble, as I’ve described many times, with the S&P 500 Price/Earnings ratio at a historically high 21.3. What can happen in Shanghai can happen on Wall Street. If you have your life savings in stocks, it’s not impossible that you too could lose 30% of your savings in three weeks. Reuters