Number of women and children refugees to Europe surges 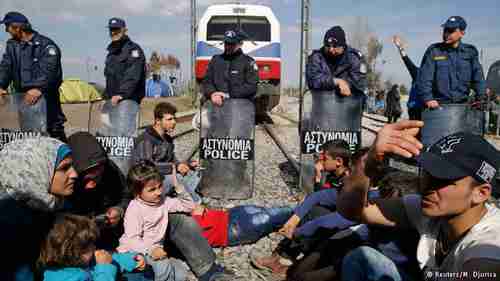 Migrants block the railway track at the Greek-Macedonian border (Reuters)

It is believed that this substantial surge in the number of female refugees is occurring because male refugees who were granted asylum in Europe last year are now telling their wives and families to follow and make the trip themselves. Unfortunately for them, things have changed drastically, borders along the “Balkan route” closed, and thousands of women and children are now stranded in Greece on the border with Macedonia. Deutsche Welle

EU and Turkey meet in Brussels for major showdown over refugees

Expect tempers to flare on Monday when officials from EU countries and Turkey meet in Brussels for a summit meeting on the refugee crisis.

The EU Commission has already promised 700 million euros ($769 million) in emergency aid to Turkey. Whether that money will materialize remains to be seen.

With 2,000 migrants continuing to arrive in Greece from Turkey every day, Turkey clearly has by far the better negotiating position. Europe wants Turkey to prevent the vast majority of refugees within Turkey’s borders from leaving for Greece. Whether it is even possible for Turkey to slow the flow of refugees, and whether they have a will to do so are two questions that also remain to be answered.

The timing of the summit is bad because European officials are in shock over Turkey’s shutdown of the country’s major opposition newspaper, the largest newspaper in the country. ( “6-Mar-16 World View — Turkey’s ‘shameful day for free press’ as government seizes Zaman media”) European Parliament President Martin Schultz has said the storming and closure of an anti-government newspaper show that “Turkey is in the process of gambling away the historic opportunity for rapprochement with Europe.”

There may also be a confrontation at the summit between Germany’s Chancellor Angela Merkel and Austria’s Chancellor Werner Faymann. Merkel has accused Faymann and the Balkan countries of tipping the EU into crisis by closing their borders, and holds him jointly responsible for the chaos in Greece.

Greece’s prime minister Alexis Tsipras has also criticized Faymann for “ruining Europe.” Tsipras also has high hopes for financial aid from Europe to provide for new refugee camps for 50,000 or more refugees. It also remains to be seen whether that money will be provided. Deutsche Welle and Kathimerini and BBC

Death of Nancy Reagan reminds us of generational differences

Coverage emphasizes how he was an American first, considering himself a true liberal. He famously had an excellent personal relationship with another Irishman, House Speaker Tip O’Neill, the most important Democrat of the time. Could we imagine President Obama having any remotely cordial relations today with any Republican?

In the 1980s, the Silent Generation, the generation of people who had grown up during the horrors of World War II, were running the country. They remembered the bloody battles, massacres, rapes, genocides and atrocities that had occurred, and they remembered the nationalism and xenophobia that had brought them about, and they knew the importance of America’s role as Policeman of the World. They understood the importance of compromise, truthfulness, ethics and honesty.

In the 1980s, the Republicans and the Democrats cooperated with each other to change the Social Security system to make it a sounder system. After that, they cooperated again to specify new rules to control the budget deficit. Compromise was still possible in 1996, when Democratic President Bill Clinton, saying that “the era of big government is over,” cooperated with the Republican Congress to eliminate the welfare entitlement. But there is not a single such issue on which compromise is possible today.

So everything they say about Nancy and Ronald Reagan’s kindness, generosity and loving relationship were true, but it is also true that they were a product of their generation, the GI Generation, a generation that still understood how the world worked.

Things started changing around 2000 with the rise of Generation-X, reacting to the excesses of the Boomer generation that grew up after the war. While the Boomers passively accepted the values of the Silent generation, the Gen-Xers, and the Millennials in the generation that followed, were openly contemptuous of those values, and considered people in the Silent and GI generations to be full of crap.

We have already had one major national disaster: Generation-Xers who became “financial engineers” in the 1990s, and used their skills to knowingly create trillions of dollars in phony synthetic securities, and knowingly defrauded investors, thinking they were screwing their fathers’ generation. People were defrauded of trillions of dollars, causing millions of people to lose their homes and jobs and savings. And worse, President Obama and other Gen-Xers don’t even seem to care about this, as not a single one of these criminals has been prosecuted, leaving them with their fraudulent winnings and able to defraud other people.

By contrast, President Bush #1 and President Clinton reacted to the Savings and Loan crisis by prosecuting thousands of bankers. President Bush #2 reacted to the Enron scandal by prosecuting several top managers. But President Obama has prosecuted nobody. Things have changed with the new generation of politicians. That’s why, for ten years, I’ve been writing about the destructiveness and self-destructiveness of Generation-X, and the worst is yet to come.

According to Pepperdine Law Professor Linnea McCord, in her book The Wisdom of Ants:

Over the past four decades, we have strayed far from the simple and clear ethical standards of the … ethics-based American Rule of Law. We have forgotten (or never learned) that long-term prosperity, peace, stability, and security require ethical conduct. Unethical conduct leads to economic failure, political instability, social disharmony, and insecurity from internal and external threats. It’s not complicated.

If you’re in Generation-X and you hate the values of the Silent and GI generations, then you may wish to consider the fact that they weren’t born with those values. What you don’t understand is that your generational predecessors — the Lost Generation before WW II and the Gilded Generation before the Civil War — were exactly like you — few morals or ethics, but willing to see anyone screwed. They learned bitter lessons in the wars that followed, and most didn’t survive. So if you hate the Silent generation, then understand that they got that way because they and their parents were just like you and learned their lessons the hard way. If you’re even still alive ten years from now, you’ll be just like them.

On Sunday, analysts talking about Nancy Reagan’s death wondered why the political climate was so different today than in the 1980s. The Democrats blame the Republicans, and the Republicans blame the Democrats. But it’s not the political parties that are to blame. It’s the generations of people in them. But don’t worry. The people in both political parties are soon going to learn all about the lessons of morals and ethics, in the same way that their great-grandparents did.