It’s official. The Administration of President Barack Obama does not want you to understand the danger that you, your friends, your family, and your loved ones are in.

With the recent attempt at the Cabinet level of the U.S. Government by Attorney General Loretta Lynch to censor what the terrorist responsible for the greatest terror attack since 9/11 was saying on the phone to the 911 dispatcher during the Orlando massacre, we have the smoking gun of Orwellian “Newspeak” in America.

Barack Obama and his political appointees and cabinet members have been trying for more than five years to explain away the jihadi threat to America and misdirect your understanding of how serious the dangers are. To quote my good friend Tom Joscelyn at The Long War Journal, it is a systematic effort to make you, “disconnect the dots.”

Here are the things that the Obama Administration does not want you to know.

One: America is losing the war against the global jihadi ideology.

Although written by a liberal scholar using politically correct verbiage, the facts detailed in a recent report published by Duke University titled “Muslim-American Involvement in Violent Extremism, 2015” cannot be denied. Figure One shows how many jihadi plots there have been in America since September 11th. As you can see, 2015 saw the greatest number of jihadi plots on U.S. soil since those horrific events in Manhattan, Washington, and Pennsylvania. This is despite the fact that just days before the San Bernardino attack, both President Obama and Secretary Kerry announced that ISIS is “contained” and “we are winning!” 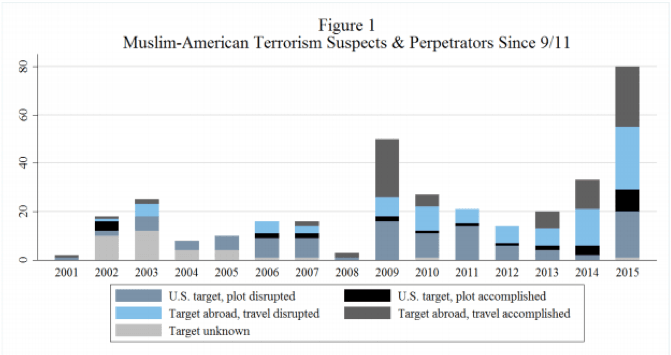 Two: There is no such thing as lone wolf terrorism.

The idea that we have disparate individuals across America that just decide one day to kill their fellow Americans is utterly and absolutely fallacious. Whether it is the first nineteen terrorists responsible for the original September 11th attacks, whether it is Major Nidal Hassan, the Fort Hood Shooter; or the Tsarnaev brothers responsible for the Boston Marathon Bombing; Malik and Farook, the San Bernardino killers; or last weekend’s attacker, Omar Mateen – these individuals are all connected. The connective tissue between them is the ideology of Global Jihadism, their belief that they are fighting for Allah (not “God,” as Loretta Lynch would have you believe, but Allah, the God of Islam).

Three: ISIS is much more powerful and much more dangerous than al Qaeda.

Unlike al Qaeda, ISIS has managed to achieve that which no other jihadi terrorist group has ever been able to achieve: the declaration of a theocratic Islamic state in the 21st Century. At the end of June 2014, Abu Bakr al-Baghdadi declared from the pulpit of the Grand Mosque in Mosul that the Islamic Empire is back and he is its new emperor, or Caliph. Unclassified U.S. Government estimates state that ISIS has been making between $2 and $4 million every day from its illicit activities, it has recruited more than 85,000 jihadi fighters, more than 6,000 of whom are Westerners, including Americans, and it now has 6 million people living on its territory in multiple countries. This is no “JV Team.” ISIS has taken their team to the Superbowl.

Four: ISIS is here in America.

Omar Mateen, the jihadi responsible for the Orlando atrocity, is the 103rd terrorist interdicted on U.S. soil since Abu Bakr al-Baghdadi declared the Caliphate than two years ago. This is not a question of a threat 8,000 miles away in Mesopotamia or in Afghanistan; this is a threat that is already well entrenched on the shores of the United States. If you examine the details in the report I co-authored with my wife, ISIS: The Threat to the United States, the most disturbing fact of all is that, of all the people we have interdicted on U.S. soil, a full third of them had no interest in traveling to the Middle East to be jihadis in Iraq or Syria, but had decided the best way to serve the new caliph, the new emperor of Islam, would be to kill American infidels on U.S. soil. The threat is not an if, it is NOW. And if the White House doesn’t change its strategy, there will be more attacks like Orlando.

Five: As a nation, we are weaker than we have ever been since September 11th.

Although America is the most powerful nation the world has ever seen, the systematic subversion of our national security establishment under the banner of inclusivity, cultural awareness, and political correctness has continued to increasingly endanger Americans. In a memo sent from the White House in 2011 to the then-Attorney General and the General of the Joint Chiefs of Staff, the Executive ordered that, in the name of multiculturalism and mutual respect, any mention of Islam was to be excised from government counterterrorism training within all of the armed services, and even federal law enforcement, including the FBI, and our various intelligence agencies. This means that even words like ‘jihad,’ which are the terms used by the terrorists to describe themselves, are and have been banned from use within the U.S. federal government. This means that our law enforcement, intelligence, and military operators have been denied access to accurate information and relevant training for several years. Subsequently, they are not in a position to understand our Enemy and defeat them.

Six: Lastly, the Obama Administration does not want you to know that the ideology of global jihad is more powerful than it has ever been.

ISIS has captured the brand of Global Jihadism from its former master, al Qaeda. Today, not only has it established a Caliphate in the Middle East, but it has also convinced tens of thousands of young Muslims that the End Times have begun, since the territory they have captured—referred to as “al Sham” in the Islamic eschatology—is the equivalent of Megiddo for Muslims, i.e. the site of the last Holy War before Judgement Day. As a result of this very effective exploitation of an apocalyptic religious theme being broadcast daily over social media (ISIS posts more than 55,000 social media posts every 24 hours), ISIS now has at least 43 affiliates in 19 countries, and they show no sign of losing momentum.

Loretta Lynch said this week, after the Orlando massacre, that our most powerful weapon against people like Omar Mateen is “love.” She is wrong. Love would not have worked against the Nazis or the totalitarians in the Kremlin. We are facing another totalitarian enemy that will not be negotiated with and that will not stop unless every “infidel” is enslaved or crushed. That truth is impossible for the President and his bubble-dwelling coterie to believe. As a result, Americans will continue to face an escalating risk until we have a change of administration.

The question is, will the new Commander-in-Chief perpetuate the lies and distortions of the last eight years or finally talk truthfully about the incarnate Evil that we face and what it will take to destroy it.

Dr. Sebastian Gorka is a National Security Editor for www.Breitbart.com and the author of the New York Times bestseller, Defeating Jihad. You can follow him on Twitter @SebGorka.