Thousands in South Sudan flee to Uganda to escape violence 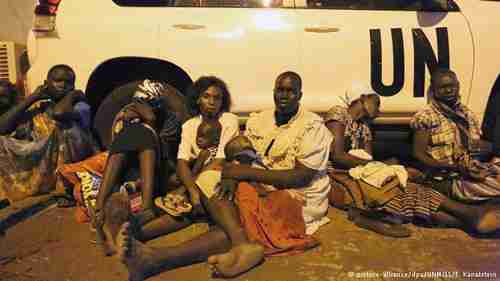 Thousands of refugees from South Sudan are fleeing across the border to Uganda to escape the possibility of fresh tribal fighting in South Sudan’s capital city Juba, despite the fact that the fighting has cooled down in the last week. Over 5,000 refugees crossed the border over the weekend, joining more than 6,000 that had crossed previously.

However, that number of refugees is dwarfed by the number of people who have had to flee their homes and are still in South Sudan. At least 42,000 fled the city of Juba in recent days, and hundreds were killed. The UN Mission in South Sudan (UNMISS) is responsible for the protection of civilians in refugee camps in South Sudan.

There are fears that if the fighting worsens, then there may be over a million refugees, both internal and flowing into neighboring countries. ( “11-Jul-16 World View — Fears that renewed South Sudan tribal fighting could spiral into larger war”)

Ever since the violence began in December 2013, the number of South Sudan refugees in neighboring countries is around 835,000. UNHCR and Al Jazeera

An African Union (AU) summit approved the deployment of an all-African peacekeeping to South Sudan, now that there is a lull in the fighting. The soldiers from the force are would come from Ethiopia, Kenya, Rwanda, Sudan and Uganda.

However, South Sudan president Salva Kiir will not grant permission for an AU force to enter the country. According to Michael Makuei Lueth, South Sudan’s Information Minister, “We are not ready for a deployment of even a single additional soldier. That does not solve the problem. As a sovereign state… this thing cannot be imposed on us without our consent. [It would not] serve the interests of the people of South Sudan.”

However, the situation is dire. Over a third of South Sudan’s population are expected to face severe food shortages over the coming months, and there is a real risk of what the UN has termed a “hunger catastrophe”. Deutsche Welle and BBC and Times Live (South Africa)

Uganda’s president Yoweri Museveni said he was opposed to a U.N. plan to impose an arms embargo on his neighbor South Sudan, saying it would weaken its army just as the country was trying to contain a resurgence of violence.

There’s widespread fear that the tribal fighting will spiral into a full-scale civil war.

From the point of view of Generational Dynamics, that is not going to happen. As in wrote in “Generational history of South Sudan and Dinka-Nuer clashes”, the last generational crisis war between the Dinka and Nuer tribes climaxed in 1991 with the “Bor Massacre,” starving, displacing and killing hundreds of thousands of people. Thus, South Sudan is in a generational Awakening era, and there are many survivors of the Bor Massacre from both sides who do not want to see anything so horrible happen again, and will do anything they can to prevent it. So an event similar to the Bor Massacre will not occur.

We ave seen the same thing in Syria. Syria’s president Bashar al-Assad launched a war of extermination against the Sunnis in Syria in 2011, and it would have fizzled out long ago, almost certainly with the defeat of al-Assad, except that Russia and Iran have been pouring vast amounts of weapons and soldiers into Syria to prop up the regime and keep the fight going.

Returning now to South Sudan, the United Nations would like to impose a weapons embargo on both tribes, but in view of opposition from people like Uganda’s president Yoweri Museveni, that’s unlikely to succeed. Reuters and Sudan Tribune