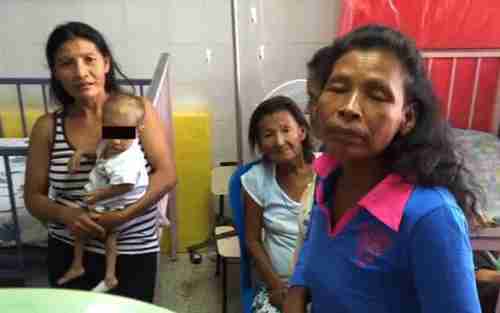 Children in Venezuela are increasingly dying from starvation, their bodies nothing but skin and bones, the outlines of their ribs visible.

The two major Socialist countries in the world, Venezuela and North Korea, have starving population with no hope for improvement because they’re following Socialist policies that have been disastrous whenever and wherever they’ve been tried. It’s just one more of those things that you wouldn’t believe is even possible if it weren’t actually happening.

The Soviet Union and China were forced to abandon Socialism in the last few decades in order to allow people to eat. Even Cuba, that Socialist paradise, finally gave up Socialism in 2010. ( “16-Sep-2010 News — Cuba’s seismic shift has global implications”)

But Cuba’s economy is still crippled from decades of Socialism, and is still heavily dependent on Venezuela for energy imports.

For years, Venezuela has met its commitment to Cuba to ship some 80,000 to 90,000 barrels of oil daily to Cuba at subsidized prices in exchange for the services of some 40,000 Cuban medical and educational professionals.

But oil production in Venezuela has fallen 12% in the last year alone, thanks to Venezuela’s oil industry, run by incompetent cronies of the Socialist president Nicolás Maduro Moros. Maduro has promised to keep the oil flowing to Cuba, but in fact they’re finally declining, down 19.5% this year.

There are widespread fears in Cuba of another “Special Period,” like the one that occurred in the early 1990s with the collapse of the Soviet Union, which at that time was Cuba’s provider, causing extreme hardship for the Cuban people.

The collapse of Venezuela’s economy will impose new hardships on the Cuban people, but they’re unlikely to be as bad as the “Special Period” of the 1990s. In 1989, more than 80% of Cuban trade was with the Soviet bloc, which provided 98% of Cuba’s oil. Today, Venezuela accounts for only about 40% of Cuban trade. Today, Cuba imports 59% of its oil, so even a total loss of Venezuelan oil would not have the disastrous impact the Soviet collapse had. Miami Herald and Merco Press (Montevideo Uruguay) and World Politics Review

Egypt claims that it killed leaders of ISIS branch in Sinai

A statement on the Facebook page of Egypt’s armed forces says that a missile strike has killed Abu Doaa Al-Ansari, the leader of the ISIS branch in northern Sinai, along with 45 additional militants.

Al-Ansari was the leader of the terror group Ansar Bayt al-Maqdis (ABM – Ansar Jerusalem – Champions of Jerusalem), which changed its name to Al Wilayat Sinai (Province of Sinai) when it changed its allegiance from al-Qaeda to the so-called Islamic State (IS or ISIS or ISIL or Daesh).

ABM has been conducting terror attacks against Egypt’s army and government targets for years, but they became more frequent in 2013, after the coup that deposed Mohammed Morsi and his Muslim Brotherhood government.

Some analysts are questioning the validity of Egypt’s claim that ABM leader Abu Doaa Al-Ansari has been killed. They point out that killing 45 militants with a missile strike is extremely unlikely because so many militants would not congregate in one place. Egypt has clamped a strict media blackout on the Sinai, so it’s impossible to independently verify Egypt’s claims. Daily News Egypt and Al-Ahram (Cairo) and Al Arabiya (23-Jul)

The video shows past attacks on Egypt’s military targets, and says:

This is only the beginning, and our meeting [will be] in Rome and Beit Al-Maqdis [Jerusalem]. … Oh Jews, wait for us. The punishment [we have prepared for you] is severe and soon you will pay a high price.