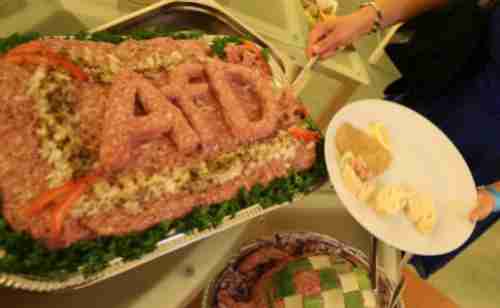 Food at the AfD election party in Berlin (DPA)

Germany’s center-right Christian Democrat Union (CDU), led by Chancellor Angela Merkel, suffered a historic defeat in a regional election in Berlin on Sunday, falling off 6% since the last election, getting only 17.6% of the vote, behind the Social Democratic Party (SDP) at 21.6%. Most significant were the gains by the right-wing anti-immigrant Alternative für Deutschland (AfD – Alternative for Germany) party, considered xenophobic by many, at 14.2%. Berlin’s SPD Mayor Michael Müller had dramatically warned before the election that a strong AfD result would be “seen throughout the world as a sign of the resurgence of the right and of Nazis in Germany.”

Merkel’s loss is attributed to a voter reaction against her famous phrase “Wir schaffen es” (we can do it), referring to a policy of allow hundreds of thousands of refugees to enter Germany in 2015.

Merkel expressed regret over the election loss, and to a poll indicating that 82% of Germans are unhappy with the refugee policy:

If I could I would play back time so I and the German federal government and leaders could have been better prepared,” she said.

We have not done everything right in the last few years. We are not world champions in integration…

If those 82% means that people do not accept foreigners, particularly people with Islamic background, this is against our constitutional rights, against our Christian democratic… and personal convictions. I and the CDU cannot represent this course.

However, it is not completely clear that the loss was entirely due to migrant issues. The election was also dominated by local issues, including poor public services, crumbling school buildings, late trains and a housing shortage.

Some reports indicate that Merkel’s refugee policy will continue in any event. While the Social Democrats won the largest share of the vote, 21.6%, they will have to enter a coalition with two other left wing parties, Die Linke (15.6%) and the Greens (15.2%) to govern. A left-wing coalition, if formed, would probably continue to be favorable to refugees. AFP and CNN and McClatchy

Summit in Bratislava shows an EU in disarray

There was a European Union Summit meeting over the weekend in Bratislava, the capital city of Slovakia, but only 27 of the 28 EU members were represented. The representative from the UK was not invited because on June 23, the UK passed the Brexit referendum, calling for the UK to leave the EU. So even though the UK is still a full-fledged member of the European Union, the new UK prime minister Theresa May was not invited.

Germany’s Chancellor Angela Merkel has won repeated elections in Germany, the strongest economy in Europe, and so Merkel has been setting much of the agenda for Europe for almost ten years.

Although there is no one in Europe with the charisma necessary to replace Merkel as a leader, Merkel has certainly been weakened by the migrant crisis and her election defeats. Between that and Britain’s Brexit vote, which called for Britain to leave the European Union, Europe itself is in disarray.

Indeed, the Brexit scenario is itself in disarray. Britain’s new prime minister Theresa May has said that they won’t even invoke “Article 50” until next year. Invoking Article 50 begins the two-year negotiation process for Britain’s exit from the EU, and so no negotiations have begun to take place, leaving many businesses and people unable to make plans.

There are two major issues to be resolved by the Brexit negotiations. One issue is whether Britain will remain as part of the European Common Market, which is considered necessary by some people for Britain’s trade requirements. The other issue is whether Britain will allow the free flow of people between Britain and the EU nations. Many Britons would like to remain in the Common Market even if there is no free flow of people, but many European leaders have already rejected that option, saying that you can’t have freedom of trade unless you also have freedom to travel.

Even without the UK present, the EU summit was considered failure. Many people had hoped that the Summit would find a way to resolve the disputes, and particularly to reach a compromise with Hungary’s prime minister Viktor Orbán which would allow Hungary to accept some migrants.

None of this was accomplished. Italy’s prime minister Matteo Renzi said: