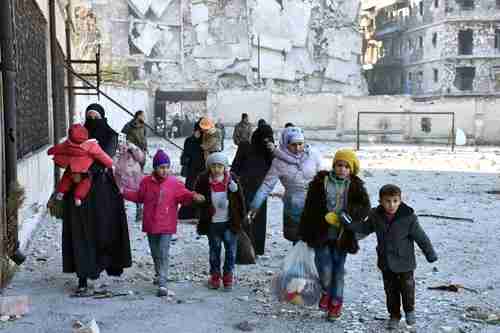 A family of Sunni ‘terrorists’ flee the fighting in Aleppo (Reuters)

It took four armies, but Syria’s president Bashar al-Assad is claiming victory in recapturing Aleppo from anti-Assad rebels. A year ago, al-Assad himself said that his army was close to being defeated. But then his three allies stepped up their military support with people, weapons and bombs, and al-Assad is finally able to declare victory.

According to Matthew Rycroft, the UK ambassador to the UN:

Al-Assad’s forces, propped up by Russia and Iran, have once again redefined horror. They have gone from siege to slaughter.

Today the United Nations has received reports that pro-government forces have been entering homes in Eastern Aleppo. They have been going door to door, executing people on the spot. 82 people murdered. 13 of whom were women. 11 were children. None were terrorists.

When it happened before, we said never again. Well, it is happening again, today.

As I’ve been writing for a long time, Syria’s president Bashar al-Assad is the worst genocidal monster so far in this century. He continues a line of monsters from the previous century that include Josef Stalin, Adolf Hitler, Mao Zedong, Pol Pot, and others.

The civil war in Syria was caused by al-Assad when he unleashed his army and air force against peaceful protesters in 2011. Up to that point, Turkey and Saudi Arabia were friendly with al-Assad. Things really turned around in August 2011, when al-Assad launched a massive military assault on a large, peaceful Palestinian refugee camp in Latakia, filled with tens of thousands of women and children Palestinians.

This attack alone shows that al-Assad’s fight is not with “terrorists,” but with innocent Sunni civilians. Al-Assad is a member of a Shia Alawite clan that has historically fought many wars with Sunnis. To al-Assad, Sunni civilians are nothing but cockroaches to be exterminated.

Al-Assad’s genocidal extermination campaign on these “cockroaches” has been a geopolitical disaster. Tens of thousands of young Sunnis traveled to Syria to fight al-Assad, creating the so-called Islamic State (IS or ISIS or ISIL or Daesh). Syrians themselves formed the “moderate” Free Syrian Army (FSA), or else joined al-Qaeda linked Jabhat al-Nusra (al-Nusra Front, now Jabhat Fateh al-Sham or JFS). Millions of Syrians were killed or displaced, and well over a million of them have fled to Europe to escape the violence.

Bashar al-Assad has the delusional view that after capturing Aleppo, the war will quickly end. Al-Assad required three other armies to capture Aleppo. Al-Assad started the civil war not because rebels were taking up arms, but because civilians were peacefully protesting. If civilians begin peacefully protesting again, will al-Assad attack them again, and ask those three other armies to come back? UK Government and ARA News (Syria)

Many people, especially in the Mideast, blame al-Assad’s geopolitical disaster on inaction by the Barack Obama administration, especially Obama’s “red line” flip-flop on intervening when al-Assad used Sarin gas on his own innocent civilians. It’s impossible to know what the outcome of intervention at that time would have been, but many people believe that the worse of the genocide would have been avoided.

In fact, the Obama administration and many Western administrations went farther, and avoided saying anything that might appear as a criticism of al-Assad, Russia or Iran. However, several years of built-up anger seemed to explode at the UN Security Council on Tuesday, with the excoriating remarks of American’s UN ambassador Samantha Power:

To the Assad regime, Russia, and Iran, three member states, behind the conquest of and carnage in Aleppo. You bear responsibility for these atrocities by rejecting UN ICRC evacuation efforts, you are signaling to those militia who are massacring innocents to keep doing what they are doing. Denying or obfuscating the facts, as you will do today, saying up is down, black is white, will not absolve you. When one day there is a full accounting of the horrors committed in this assault of Aleppo – and that day will come sooner or later — you will not be able to say you did know what is happening, you will not be able to say you were not involved.

We all know what was happening, and we all know you were involved. Aleppo will join the ranks of those events in world history that define modern evil, that stain our conscience decades later. Halabja, Rwanda, Srebrenica, and now Aleppo.

To the Assad regime, Russia, and Iran, your forces and proxies are carrying out these crimes. Your barrel bombs and mortars and airstrikes have allowed the militia in Aleppo to encircle tens of thousands of civilians in your ever tightening noose.

It is your noose. Three member states of the UN contributing to a noose around civilians. It should shame you. Instead, by all appearances, it is emboldening you. You are plotting your next assault. Are you truly incapable of shame? Is there literally nothing that can shame you?

Is there no act of barbarism against civilians, no execution of a child, that gets under your skin? That just creeps you out a little bit? Is there nothing you will not lie about, or justify?

Russia’s ambassador to the UN, Vitali Churkin, responded as if he were talking about another place altogether:

The vast majority of the former members of the illegal armed groups that have handed themselves over to the authorities as a result of the amnesty and have gone through the procedures have been returned to their families. The most important thing is, the counterterrorist operation in Aleppo will conclude in the next few hours.

In fact, as the previous quote from Matthew Rycroft indicates, reports reaching the BBC and other media sources say that Sunnis who “hand themselves over” to the Syrian army authorities are most likely to be immediately shot. In fact, we can’t believe any garbage that comes out of the mouths of Vitali Churkin, Bashar al-Assad, or Vladimir Putin. Middle East Eye

In the past few months, satellite photography provided by Human Rights Watch has documented that 30,000 ethnic Rohingyas living in Burma’s (Myanmar’s) Rakhine state have been left homeless after their homes and villages have been systematically burned down.

Few people doubt that the perpetrators are Burma’s army, conducting ethnic cleansing. The BBC has broadcast footage of an undercover road trip through the region, including interviews who says that their husbands were burnt and killed by soldiers, and that they were repeatedly raped by soldiers.

Burma’s government has been making the ridiculous claim that the Rohingyas are burning down their own homes and villages to embarrass the government. This is the kind of garbage that we always get from Bashar al-Assad and Vladimir Putin, and now from officials of Burma.

So Human Rights Watch has released new imagery that shows a village being burnt down as multiple military transport vehicles and the periodic landing of military helicopters move about.

Nobel prize winner Aung San Suu Kyi, who is the de facto leader of Burma, is losing her luster as a human rights icon. So far, Western leaders and media have given her the benefit of the doubt, suggesting that she was unable to control the army.

But more and more, the question is arising whether she’s a full participant in and supporter of the ethnic cleansing of Rohingyas, having the same hatreds as other Burmese leaders. Human Rights Watch