There isn’t much love for Valentine’s Day in certain quarters of Indonesia. As Channel NewsAsia reports, the holiday is routinely denounced as an example of “Western decadence” by “Islamic clerics and some pious Muslims.”

Muslim high-school students in the city of Surabaya staged a protest and chanted “Say no to Valentine,” while the National Muslim Youth Association “urged females to avoid using emoticons and an excessive amount of fragrance in a pre-Valentine’s Day message.”

“There is a certain pride about this positive action carried out by the students,” beamed the headmaster of the school in Surabaya, which Channel NewsAsia describes as “run by an Islamic organization.”

Just in case any students do not take positive action on their initiative, the UK Express reports that government officials in Surabaya, which is the second-largest city in the country, ordered the city’s schools to ban Valentine’s Day celebrations. The provinces of West Java and Aceh have taken similar measures.

According to Reuters, authorities outright banned Valentine’s Day celebrations in some parts of Indonesia and Pakistan because it “encouraged casual sex and ran counter to cultural norms.” 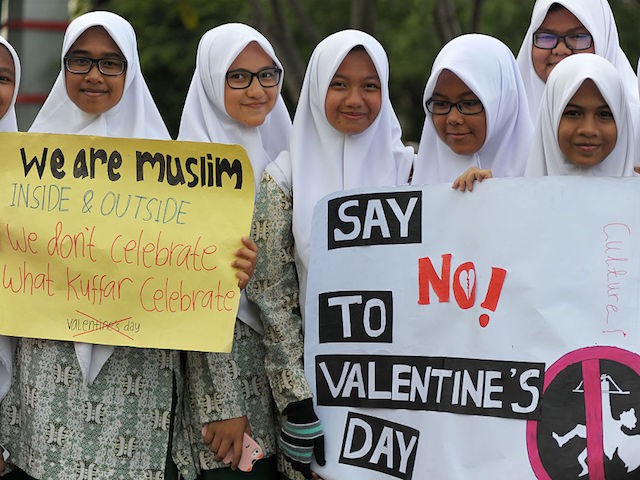 In the city of Makassar, police raided stores and pulled condoms off the shelves, having received reports that “the minimarts were selling condoms in an unregulated way.”

Deutsche Welle quotes the mayor of Makassar complaining that condoms were sold “as if they were candy,” and warned shop owners they could lose their licenses if they sell condoms to unmarried people.

There is an alarming political undercurrent to this anti-Valentine’s Day push by Indonesian Muslims, as Deutsche Welle explains:

Valentine’s Day this year falls a day before the capital, Jakarta, goes to the polls to elect a new governor in a vote widely viewed as a test of the country’s religious tolerance.

Basuki Tjahaja Purnama, an ethnically Chinese Christian, is running for re-election in a campaign marked by accusations that he insulted the Koran. The claims have led to hardline Islamic protests and a trial for blasphemy. The case has been criticized as unfair and politically motivated.

Purnama is going up against two Muslim candidates, and his opponents have repeatedly urged people not to vote for him because he is not a Muslim. Tens of thousands of conservative Muslims have in recent weeks rallied at mosques against Purnama, whose lead in the polls has slipped.

If he loses the vote because he is not a Muslim and is jailed for blasphemy, analysts say, it would be a blow to the country’s reputation as a pluralist democracy.

Reuters notes that while the highest Islamic clerical council in Indonesia declared a fatwa (religious injunction) against Valentine’s Day in 2012 because they deemed the holiday “contradictory to Muslim culture and teachings,” Indonesian law protects religious diversity, and the holiday is still big business in cities like Jakarta.

The Islamic Republic of Pakistan, by contrast, banned public Valentine’s celebrations in Islamabad and instructed media not to promote the holiday, to the dismay of florists.