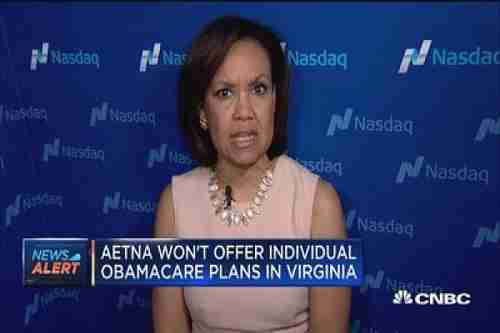 Obamacare continued its multi-year meltdown and death spiral on Wednesday when Aetna said it will completely leave the Obamacare business at the end of the year. According to Aetna:

Our individual commercial products lost nearly $700 million between 2014 and 2016, and are projected to lose more than $200 million in 2017 despite a significant reduction in membership.

Obamacare would have collapsed on day one, but President Obama confiscated $716 billion in the Medicare insurance fund to providing funding for Obamacare entities. This is money that workers have been paying into the fund for decades, and Obama just blew it all away.

The signs that Obamacare was collapsing have been clear now for almost two years, as several large insurance companies, UnitedHealthCare, Humana, BlueCross BlueShield, and others, have announced partial or complete pullouts from Obamacare because of massive financial losses. Aetna had previously announced a partial pullout, but now the pullout is complete.

There have been astronomical price increases on health insurance in each year of Obamacare, and the next year is no exception. The first states to make their filings public for next year are Maryland, Virginia and Connecticut, and they’re announcing premium increases of more than 20%.

Furthermore, fully 1/3 of the counties in the United States have only one insurance option available.

This is exactly what I predicted in 2009, shortly after Obamacare was first announced, when I called it a proposal of economic insanity.

The reason I knew what would happen is because I remember well what happened with President Richard Nixon’s price controls in the early 1970s. They were supposed to lower the inflation rate from 4% to 2%. Instead, the inflation rate surged to 12%.

Let me repeat that. The inflation rate had been 4%. Nixon wanted to reduce it to 2% with wage-price controls. Instead, it went up to 12%.

One thing that I remember well is that farmers were killing baby chickens because chickens were price-controlled, but chicken feed was not. So if the farmers allowed the chickens to grow, then it would cost more to feed than the price Nixon’s controls would allow the farmer to sell the chicken. It was an absolute disaster for the economy, and the economy did not recover for a full decade. This shows how Nixon’s controls so thoroughly destroyed the American economy, resulting in huge inflation rates.

I predicted that the same thing would happen with Obamacare, and that prediction was 100% correct. The reason I knew what would happen is because I still remembered Nixon’s price controls. Health insurance inflation is now increasing at over 20% per year, and insurers are dropping out because it costs more to insure them than the premiums that they’re allowed to collect.

Furthermore, millions more people than ever are effectively uninsured, either because the deductibles are so high that they can’t collect insurance, or because they can’t find a doctor that will accept their Medicaid insurance.

In 2015, I spent three months doing a detailed analysis of Obamacare, and wrote an article about it.

I was absolutely stunned by the sheer stupidity of this law. One example is “Risk Corridors.” If an insurer is profitable, then the insurer pays profits into a “risk corridor fund” set up by the Centers for Medicare and Medicaid Services (CMS). If the insurer is losing money, then that insurer receives money out of the fund.

As I drilled down into this, I couldn’t believe what I was reading. Why would any insurer even try to be profitable, if their profits were simply going to be confiscated? If an insurer had some extra money, they might as well spend it, since they were going to lose the money anyway.

Risk Corridors is just one example of some of the stupidest things I’ve ever seen, and it shows the stupidity of the people in the Obama administration who pushed this piece of crap.

So now Obamacare is totally collapsing, and the Democrats and Republicans are jockeying to see who’s going to get the blame as the disaster unfolds. It makes you want to vomit, but that’s nothing new in Washington these days. Reuters and Bloomberg and Daily Signal

According to new figures published on Thursday, patients in Britain’s National Health Service have to wait several months to get diagnostic tests when they’re suspected of having bowel cancer. This is one of the most lethal forms of cancer, and patients could die in the meantime.

The mainstream media in Britain rarely mentions this, and you never hear it from the American media, but Britain’s National Health Service is a growing financial disaster that is near collapse. As I’ve been reporting since 2015, Britain’s National Health Service (NHS) is facing an existential crisis, with a huge and accelerating deficit expected to reach 22 billion pounds ($32 billion) by 2020.

You would think that at least emergency situations would be covered adequately by the NHS, but the bowel cancer example shows that they’re not.

The financial crisis has caused so many hospitals to close that there was a shortage of beds early this year, and patients arriving in ambulances had to remain outside the hospital in the ambulances for several hours, until a bed could be made available.

My favorite example is that if you have a toothache, then it can take a couple of months to get an appointment with a dentist, so you’d have to live with your toothache for a couple of months. Dentistry services are so bad that people are buying “do-it-yourself (DIY) dentistry kits” to take care of their whole families, as was done in the Middle Ages.

Whenever anyone talks to me about Obamacare, they tell me about how they like getting subsidized health care, or they like to be able to wait until they’re actually sick before they get health insurance. Well, it’s nice to get things for free, isn’t it? I know that I’ve always loved getting things for free. It’s so nice. Unfortunately, it leads to financial disaster, as happened with Nixon’s price controls, with Britain’s NHS, and with Obamacare.

Why doesn’t Congress just pass a law outlawing hurricanes and earthquakes? Wouldn’t that save a lot of lives? Guardian (London)

Sharon Helman, the former director of the Veterans Administration hospital in Phoenix, has had her firing overturned by a federal appellate court.

Helman has a criminal conviction for taking bribes from lobbyists, and had been director when it was revealed that veterans were dying because they couldn’t get care that they were entitled to, and that Helman and other hospital directors were lying about wait times.

Like Obamacare and Britain’s NHS, the Veterans Administration’s health care system is a financial disaster waiting to collapse. And one reason is that even a criminally-convicted perpetrator cannot be fired. USA Today