Al-Tanf is on the Syrian side of Iraq’s al-Waleed border crossing, and is on the strategic Route 1 highway between Baghdad and Damascus

The United States military is increasing its “combat power” in southern Syria around the American military training camp in al-Tanf, a Syrian town on the border with Iraq, on the Syrian side of Iraq’s al-Waleed border crossing. The military buildup is in response to the approach of Iran-backed Shia forces from Iraq and the Syrian regime. Some unconfirmed reports indicate that the Shia forces are backed by Russian paratroopers.

We have increased our presence and our footprint and prepared for any threat that is presented by the pro-regime forces.

Dillon said of the Iranian-backed forces being massed, “We see that as a threat.” There are 150 US troops in the al-Tanf base.

There is already been one deadly confrontation, as we reported two weeks ago. A pro-Syrian regime convoy was headed in the direction of the al-Tanf camp. US warplanes were scrambled in a “show of force” to dissuade the convoy from proceeding further. That show of force was only partially successful, as five of the vehicles continued approaching the base. In response, American warplanes launched a series of airstrikes against the military convoy, destroying all the vehicles. It’s not known whether there were any casualties.

It has believed that the militia forces in the convoy were not from the regular Syrian army, but were Shia militias coming either directly from Iraq or from Iran or from Iran’s puppet Hezbollah militia in Lebanon.

This is the situation that the US military is confronting. Al-Tanf is on the strategically important Route 1 highway that connects Baghdad to Damascus. Iran’s objective is for Shia forces from Iran, Iraq, Lebanon and the Syrian regime to control the entire length of Route 1, so that Iran can easily supply weapons and transfer militias to the Syrian regime and to Hezbollah in Lebanon. The US administration under President Trump is opposed to allowing Iran to expand its military presence in this way.

Al-Tanf is in a “deconfliction area,” as specified by agreements reached among Russia, Iran, and Turkey in peace talks held recently in Astana, Kazakhstan. The Iran-backed forces headed for al-Tanf are actually in violation of the of the Astana agreement that Iran signed. Reuters and Al Monitor and ARA News (Syria Kurds) and Ahlul Bayt (Iran)

Iran-backed forces massing near the al-Tanf American base

The US Defense Department confirmed last week that hundreds of Iranian-backed Shia militiamen, including troops of Syrian regime president Bashar al-Assad, are massing near the American training base near al-Tanf.

In response, US planes over the weekend dropped 90,000 leaflets on the Iranian-backed militias: 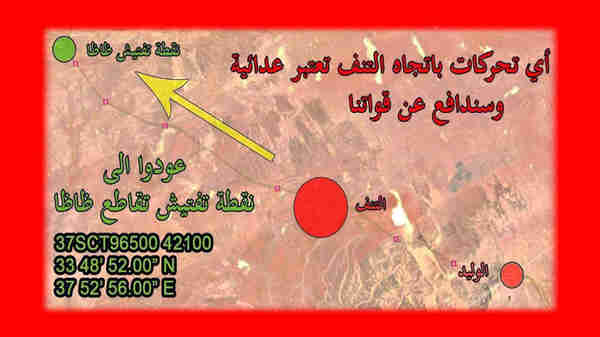 So far, these and other warnings have been ignored. The US military believes that Iran’s Quds Force plans to take control of large regions of Syria now controlled by the so-called Islamic State (IS or ISIS or ISIL or Daesh), once ISIS is defeated in its two remaining strongholds, Mosul in Iraq and Raqqa in Syria.

However, the US military consider the Iranian militias to be a threat to American forces. According to Pentagon spokesman Captain Jeff Davis:

We continue to see massing [of forces] and we are concerned about that. These patrols are unacceptable and threaten coalition forces.

He added that American forces are not looking for a conflict, but that they would defend themselves. Kurdistan 24 and Asharq Al-Awsat (28-May) and Al-Alam (Iran)