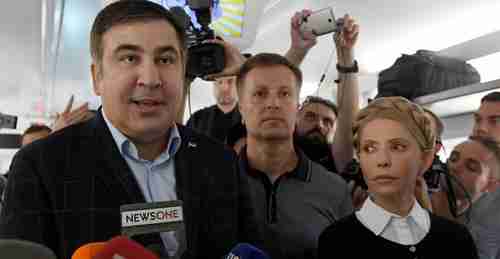 Mikheil Saakashvili – a man who is stateless, no longer the citizen of any country – “invaded” Ukraine from Poland on Sunday, despite attempts by Ukraine’s government to keep him out. Saakashvili is variously described as colorful, ambitious, arrogant, divisive, headstrong, and an egomaniac, has had his citizenship revoked in two countries, Georgia and Ukraine, mainly because he is constantly pissing people off.

Saakashvili, who has been based in Poland’s capital city Warsaw, had vowed to return to Ukraine on Sunday, and challenge the government or president Petro Poroshenko:

I’ll go through to the end, until victory. But it won’t be my own victory, but that of the people over oligarchy.

Poroshenko has declared Saakashvili to be persona non grata in Ukraine and said that Saakashvili would be prevented from entering.

So on Sunday morning, Saakashvili took a train to Ukraine. But when it reached the Polish town of Przemysl, the woman in charge of the train said that she had been ordered by authorities to stop the train there until Saakashvili got off. Saakashvili told journalists on the train that authorities were effectively holding hundreds of passengers hostage. He said: “Can you imagine what kind of idiots we’re dealing with?”

After several hours of delay, Saakashvili got off the train and got onto a bus that took him to the border of Ukraine, intending to walk across. Polish border guards allowed him to pass. But a line of Ukrainian border guards stood arm-in-arm to block Saakashvili from crossing the Ukrainian checkpoint.

All of these shenanigans were being covered live in the news, and thousands of Saakashvili supporters had gathered at the border crossing. In early evening, Saakashvili and his supporters broke through the line of border guards and entered Ukraine.

The Ukrainian border service said in a Facebook post that the crowd broke through a checkpoint and that fighting broke out when guards tried to block Saakashvili’s supporters. Deutsche Welle and AP and VOA and Reuters

Saakashvili to ‘march on Kiev’ and challenge Poroshenko government

Mikheil Saakashvili has had an extremely colorful career.

In 2003, at age 36, Saakashvili became president of the Republic of Georgia in the “Rose Revolution,” massive public demonstrations that brought down the pro-Russian president Eduard Shevardnadze and brought Saakashvili to power.

Saakashvili remained in power until 2013, but in the midst of that period, he and Georgia suffered a major humiliating loss, when Russian troops under Vladimir Putin invaded Georgia in 2008 and captured two Georgian provinces, Abkhazia and South Ossetia, which are still under Russia’s control.

Finally, Saakashvili was removed from the presidency in 2013. In May 2015, Ukraine’s president Petro Poroshenko made him a Ukrainian citizen, which resulted in the loss of his Georgian citizenship.

So in May 2015, Poroshenko appointed Saakashvili governor of the southern Ukrainian port city Odessa, with the direction to end corruption and crime in the city. That did not work out too well. Saakashvili and Poroshenko started out as friends, but Saakashvili’s fight against corruption brought him into conflict with Poroshenko, whom he accused of blocking the efforts to stop corruption. The two then became enemies, and in November 2016, Saakashvili resigned from his job in Odessa.

In November, Saakashvili announced the creation of a new political party, the Movement of the New Forces, to oppose Poroshenko. In July of this year, Poroshenko revoked Saakashvili’s Ukrainian citizenship, leaving him stateless, a man without a country. However, Saakashvili claims that the revocation is illegal, since under international law it is illegal to revoke someone’s citizenship if it would leave him stateless.

So on Sunday, Saakashvili returned to Ukraine, to lead his new political party to the presidency of Ukraine. He will have many hurdles to overcome, not the least of which is Poroshenko’s threat to extradite Saakashvili back to Georgia, where he is wanted on criminal charges over alleged misappropriation of property and abuse of power.

Saakashvili has some powerful allies. When Saakashvili pushed through the border guards into Ukraine on Sunday, there were several Ukrainian politicians there to greet him. One was Yulia Tymoshenko, who also had been a ally of Poroshenko, and then turned against him. On Sunday, she said, “We’ve come to defend Mikheil, but we’re also here to defend Ukraine,” saying that she wanted Poroshenko to be ousted, just as Yanukovych had been ousted. BBC and AP and Deutsche Welle (11-Nov-2016)