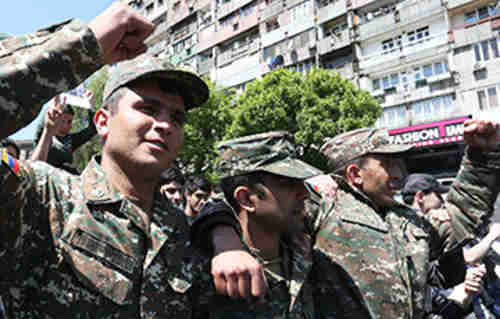 As we reported last week, Armenia’s opposition leader Nikol Pashinyan called for a “non-violent velvet revolution,” alluding to the peaceful 1989 uprising that ousted the Communist regime in the former Czechoslovakia.

Answering Pashinyan’s call, thousands of protesters blockaded streets and government in Armenia’s capital city Yerevan, with the objective of preventing the parliament from voting to make Serzh Sargsyan, who had already served ten years as president under the previous constitution, the new prime minister under the new constitution.

The parliament did vote to make Sargsyan the next prime minister, but the street protests continued. The tide turned for Sargsyan on April 23 when soldiers from the Armenian military left their barracks and joined the protesters in the streets. Sargsyan announced on April 23 that he was stepping down, and would be replaced by acting prime minister Karen Karapetyan (male), an ally of Sargsyan.

This was a clear victory for Pashinyan, and it was hoped that the protests would end and that Armenia would return to “normal.” Instead, tens of thousands of opposition protesters have returned to the streets in Yerevan, demanding that the new prime minister and his entire government step down. EurasiaNet and Guardian (London) and Charter97 (Russia) and (Trans)

Fears grow that Armenia’s instability will spill over into Russia

Armenia is a small country of 3 million people, strongly dependent on Russia. In religion, the Armenian Apostolic Church is very close to the Russian Orthodox Church. In trade, Armenians working in Russia supply 20 percent of the country’s GDP. So Armenia has little choice but to do as directed by Russia’s president Vladimir Putin. And long-time president Serzh Sargsyan, who was just forced to step down as prime minister, always aligned policies with Russia, not with the West.

But a popular revolution could change all that, and there is already talk of a new “color revolution” in Armenia. The opposition leader Nikol Pashinyan has already invoked the 1989 Velvet Revolution in the former Czechoslovakia that ousted the Communist regime.

Other color revolutions that have occurred in Russia’s backyard include the Rose Revolution in Georgia in 2003, the Orange Revolution in Ukraine in 2004, and the Tulip Revolution (or Pink Revolution) in Kyrgyzstan in 2005.

So Russia could be legitimately afraid that another color revolution might occur, this time in Armenia, and bring to power a government that was friendly to the West and unfriendly to Russia. Russia did militarily invade Georgia and Ukraine after their respective revolutions, so an invasion of Armenia at some point in the future is a possibility if things really get out of hand.

That, of course, is similar to what Serzh Sargsyan in Armenia. And not only were there massive protests, but Sargsyan was forced to step down when the army joined the protests. Putin might fear that the Russian people might copy the Armenian people’s example and hold massive anti-Putin protests, and then have army soldiers join the protests. If that ever happened in Russia, the outcome would be much bloodier than in Armenia. Washington Post and Jamestown and Moscow Times and Trend News (Azerbaijan) and Reuters

Armenian political chaos follows the path of America in the 1960s

An Awakening era is the time when the first generation that grows up after the war comes of age and starts to make itself felt. Their parents, the traumatized soldiers and other survivors of the war, try to set rules and impose restrictions so that such a war will never occur again. The kids in the younger generation, with no personal memory of the war, rebel against these restrictions, creating a “generation gap,” or a political conflict between generations.

The forced resignation of Serzh Sargsyan might be roughly compared to the President Lyndon Johnson’s forced decision in 1968 not to run for another term. He had hoped that by stepping down he would encourage an end to the massive street protests, including some violence. However, the protests and violence did not end. There were still several “long, hot summers” to come, there was the violence at the Democratic National Convention in 1968, there was Woodstock in 1969, and there were the shootings at Kent State. Finally, the resignation of Richard Nixon in 1974 was the Awakening climax, because it resolved the generational conflict in favor of the younger post-war generation, specifically the Boomers, over the GI Generation that had fought in the war.

Today we are seeing exactly the same kind of generational conflict in Armenia. The tens of thousands of young people who protested in the streets of Yerevan may have won their first victory, but the protests will continue in other forms for years, and there will be bursts of violence. There will be no “return to normal” for Armenia for many years. BBC