Jackson Hole – Third in a series. See the first two here and here.

At the Jackson Hole Economic Summit the American Principles Project demonstrated that the people can’t be fooled in the long term by monetary magic forever. In a national poll by McLaughlin & McLaughlin 1,000 respondents were asked if they would support the Gold Standard in the United States.  39% replied yes, 15% replied no, and 46% were undecided. That is more than a 2:1 ratio for favorability.

These results and the margin between approve and disapprove are better than recent polls on the Federal Reserve or its recent leaders as shown in recent Gallup polls over the last two years:  Negative on the Fed and its leaders are very high, while negatives on Gold are very low.

There are reasons for this as shown in the second article of this series. The record of the Federal Reserve has actually been worse than the Gold Standard in all the areas that matter to run a stable, growing economy.

Through history the Gold Standard has been a mechanism for moderation and stable growth. It is the bedrock of a natural discipline that limits governments from ages of excess, and from engaging in wars and economic bubbles. Each are wasteful of resources and lives, and always bring more tears than joy. The gold standard is a natural shield for the populace that protects them against the excesses of the political class and the crony class.

As one goes through the follies of history it is easy to see that the most frightening periods were enabled by going off the Gold Standard: The French Revolution and ensuing Reign of Terror with its Assignat paper currency; World War I which ended Great Britain’s century of prosperity and took it off the Gold Standard; the Russian Revolution and its pogroms that killed more than either war; the Weimar Inflation in Germany in the 1920’s that helped to bring chaos and then Hitler to power and with that World War II; President Johnson’s guns and butter strategy that help take the world off the last vestiges of Gold Standard in 1971 and the Vietnam War; Russia’s Afghanistan War that helped to bankrupt the country; and even the United States wars in Iraq and Afghanistan that is helping to bring about its bankruptcy.

We see feeble undisciplined countries with poor governments in Latin America and Aftrica, most recently Zimbabwe, Venezuela and Argentina that have huge levels of civil strife and inflation that runs up huge debts on paper currency and then default on them causing widespread poverty. All of these are welcomed by the political class and the Daddy Warbucks’ financial class as a means to power and wealth.

The Gold Standard requires and enables both fiscal and money discipline. Kwasi Kwarteng, British MP, quoted from Niall Ferguson at the Jackson Hole Summit, “Between 1816 and 1899 the UK government ran a deficit in excess of 1% of GNP in only four years.”

The Gold Standard helps to maintain fiscal and monetary discipline with it natural moderating mechanism, and it is inherently more stable than fiat currencies as was discussed in the second article in this series. The chart below shows that even without the Gold Standard, a stable dollar provided significantly higher growth than an unstable, volatile dollar for the bottom 90% of wage earners.

Yes, stability is better for the poor than it is for the wealthy. One could go so far to say the Gold Standard is also “green” because it reduces wasteful mal-investment, and limits the number fat cats from polluting the upper atmosphere in their Gulfstream G-5’s. 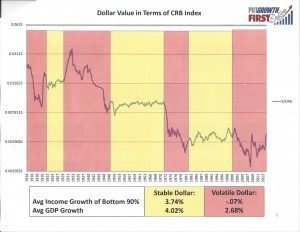 But when government fiscal deficits and current account deficits are out of control how does a country get back on the Gold standard? Without considering deficits, which need to be closed up, as they can’t run forever, there is certainly enough gold to go on the Gold standard. This of course is price dependent, but at today’s prices there is certainly a sufficient amount. Prof. White of George Mason University noted at the Jackson Hole Summit that US gold reserves (if they have not been sold off by the government) are currently 10% of M-1 Money Supply. This is more than sufficient to go back on the Gold Standard. Worldwide the total value of world Gold Stock is 12% of World GDP at $1,250 per ounce. Thus both the world and the US have sufficient gold to go on the Gold Standard. This is all a function of price.

There is another interesting way to move slowly toward the Gold Standard. Dr. Judy Shelton, a Senior Fellow at the Atlas Network has wisely proposed that some governments start using a gold bond, where investors could purchase a bond in a moderate denomination that would pay back in say 5, 10, or 20 years, depending up the bond, a certain amount of gold or a certain amount of cash.

The market would price such a bond and this could begin to provide a way to a Gold Standard.  Most importantly the world needs more fiscal and monetary discipline, which is completely lack in the United State and many other economies, both developed and developing. Japan, China and the United States are some of the most egregious offenders.

If the world continues to run up high debt levels and devalue currencies here are two warnings from towering economists from the 20th century:

John Maynard Keynes the man who called gold a “barbarous relic” also observed, “Lenin was certainly right. There is no subtler, no surer means of overturning the existing basis of society than to debauch the currency. The process engages all the hidden forces of economic law on the side of destruction….”