This one, co-authored by meteorologist Anthony Watts (of Watts Up With That? fame) shows that at least half of the “global warming” in the US since 1979 has been fabricated by NOAA.

While satellite records have shown no global warming for at least 18 years, the land based data sets like the ones maintained by NOAA for the US Historical Climate Network (USHCN) continue to show a warming trend.

One reason for this discrepancy, the study suggests, is that NOAA has been cherry-picking its raw data. That is, it has ignored the evidence from those weather stations showing little or no late Twentieth century warming and instead placed undue emphasis on the ones that do show warming.

But the ones that do show warming also happen to be the least trustworthy. These are the ones, the study shows, which have been most corrupted by the Urban Heat Island effect – and other environmental factors.

Some, for example, have been surrounded by buildings or had roads built next to them since they were first sited. Others have had airports vastly expand next door to them. What this inevitably means is that their more recent temperature measurements have been running hot – i.e., they have been distorted by factors which have nothing to do with weather or climate.

Yet, bizarrely, these are the ones that NOAA has been using as the basis for its claims about “global warming” in the US.

If, however, you look at those weather stations that haven’t been corrupted – “unperturbed” stations – what you get is US global warming roughly half as much as NOAA claims. 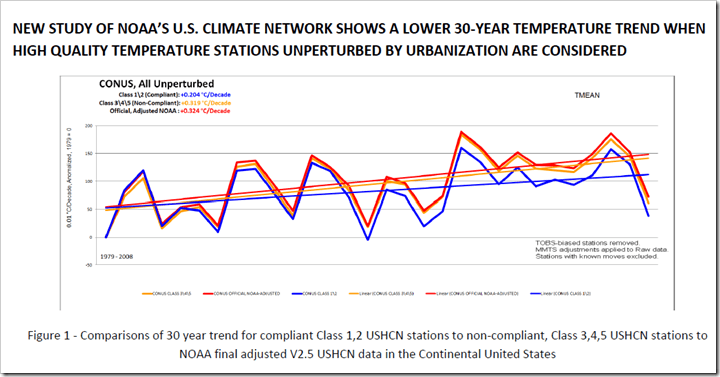 Whether this represents mere incompetence or calculated fraud by NOAA is for future courts to decide. What we do know is that the problem dates back at least to the 1990s when, for some unexplained reason, NOAA decided to halve the number of weather stations used for its official records. Even more mysteriously, the ones it chose to keep tended to show more global warming while the ones it rejected tended to show much less.

This is a point stressed in the new study:

It must be emphasized that the perturbed stations dropped from the USHCN set show significantly lower trends than those retained in the sample, both for well and poorly sited station sets.

Perhaps we should be generous to NOAA and put their decision to favour compromised weather stations over accurate ones down to spectacular stupidity and incompetence.

Then again, let’s not forget that NOAA – in common with its friends at NASA GISS – has long been in the hands of fervent climate alarmists with a point to prove. For them it is an article of faith that the planet must have been warming dramatically in the last thirty or so years because if it hasn’t then bang goes their theory that man-made carbon dioxide emissions are inexorably and catastrophically driving up the world’s temperatures.

And if the real world evidence doesn’t point the way they want, well, hell, then maybe it needs torturing till it does point the right way. We have been here before.

But if taxpayer funded scientists at NOAA and NASA have been tampering with the raw data – even to the point of cooking the books so that a cooling trend has been turned in warming one – why haven’t we heard about this before?

We have. Many times. But only, unfortunately, at Breitbart, at specialist sceptics’ sites like Watts Up With That, Notalotofpeopleknowthat, Real Science and Bishop Hill, and from outspoken newspaper columnists like Christopher Booker.

It has been in the public domain since 2007, for example, that when the activist James Hansen was in charge of NASA GISS extensive retrospective adjustments were made to US surface records between 1920 and 1999 so that a cooling trend was transformed into a warming one.

But none of this has ever translated into the major media scandal that these shysters deserve. Partly, no doubt, this reflects the bias of environmental correspondents (who tend to lean heavily green) and partly it’s a function of the MSM’s instinctive deference to public institutions (“Oh c’mon. NASA and NOAA aren’t just going to make stuff up, are they?”).

More than that, though, it’s that this scandal, if ever properly investigated, has the potential to blow the man-made global warming industry out of the water for ever.

The only reason AGW theory became fashionable in the first place was because, for a period, there seemed to be a very distinct correlation between rising temperatures and rising levels of man-made CO2. If – as seems to be becoming increasingly evident – those rising temperatures were, at best, exaggerated by dodgy scientists and, at worst, faked, then what we have is the biggest case of fraud in world history.

And there are so many people with vested interests in this fraud – even newspaper editors – that when presented with the evidence, a lot of them really would prefer not to know…