Over the next few days and weeks you will hear lots and lots of stories about how 2015 was the “Hottest Year Evah”.

Every time you do so, reach for your Browning. Whoever makes this claim will be an idiot, a liar, a charlatan – or, in the case of many establishment climate scientists, most likely all three.

I’ll explain why in a moment. But first, meet the morons:

At some point, you would think most climate change deniers would throw in the towel.

Fifteen of the 16 hottest years on record have happened this century and the other year wasn’t much earlier, in 1998. And 2015 was a breakaway year.

We just lived in the hottest year on record

Some guy in the National Journal

This other guy in the New York Times

Scientists reported Wednesday that 2015 was the hottest year in the historical record by far, breaking a mark set only the year before — a burst of heat that has continued into the new year and is roiling weather patterns all over the world.

Damian Carrington of the Guardian

This [record heat] should put pressure on governments to urgently implement their commitments to act against climate change, and to increase their planned cuts of greenhouse gases. The warming is already affecting the climate around the world, including dangerous shifts in extreme weather events. Those who claim that climate change is either not happening, or is not dangerous, have been conclusively proven wrong by the meteorological evidence around the world.”

Here is why they’re all talking rubbish and you needn’t worry about that “Hottest Year Evah” one bit.

1. The satellite data show no warming 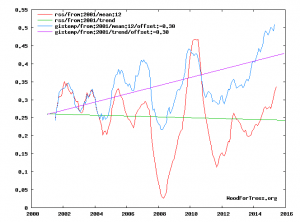 Compare the two trends (right): the upward one comes from the surface temperature dataset used by NASA GISS (and NOAA and the Met Office – they’re all pretty much interchangeable); the flat trend comes from the more accurate satellite data. Which one do you trust?

2. NASA has fiddled the raw temperature data on an ‘unbelievable scale’

From the publicly available data, Ewert made an unbelievable discovery: Between the years 2010 and 2012 the data measured since 1881 were altered so that they showed a significant warming, especially after 1950. […] A comparison of the data from 2010 with the data of 2012 shows that NASA-GISS had altered its own datasets so that especially after WWII a clear warming appears – although it never existed.

Whether this represents mere incompetence or calculated fraud by NOAA is for future courts to decide. What we do know is that the problem dates back at least to the 1990s when, for some unexplained reason, NOAA decided to halve the number of weather stations used for its official records. Even more mysteriously, the ones it chose to keep tended to show more global warming while the ones it rejected tended to show much less.

4. According to the satellites it was only the third warmest year (since 1979) 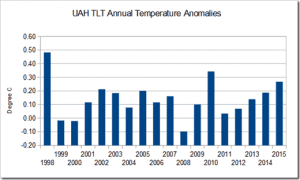 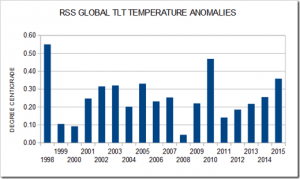 As you can see 1998 was hotter; so was 2010. And that’s just in the years since satellite records began in 1979. The planet has been hotter than this many times before, most recently during the Medieval Warming Period.

5. The claim is meaningless anyway

Here’s how Dr. Richard Lindzen, an emeritus Alfred P. Sloan Professor of Meteorology at the Department of Earth, Atmospheric and Planetary Sciences at MIT, puts it:

“I urge you when looking at a graph, check the scales! The uncertainty here is tenths of a degree.”

“When someone points to this and says this is the warmest temperature on record. What are they talking about? It’s just nonsense. This is a very tiny change period. And they are arguing over hundredths of a degree when it is uncertain in tenths of a degree.”