Recent postings have ignited a nationwide debate regarding what personal features actually determine whether one is male or female, with one LGBT spokesman insisting that hair length, arm hair, and the proper wristwatch were essential for determining gender.

Last week, Zack Ford, LGBT editor of Think Progress, argued that while genitals and chromosomes do not determine one’s sex, personal hygiene and the choice of the proper accouterments do.

In a Twitter conversation, Mr. Ford took issue with a photograph that was intended to represent a transgender woman, insisting that he could tell from the picture that the person in question was not in fact transgender but an impostor. Looking at the photo, “I see a non-trans man wearing makeup and bursting through a wall,” he tweeted. 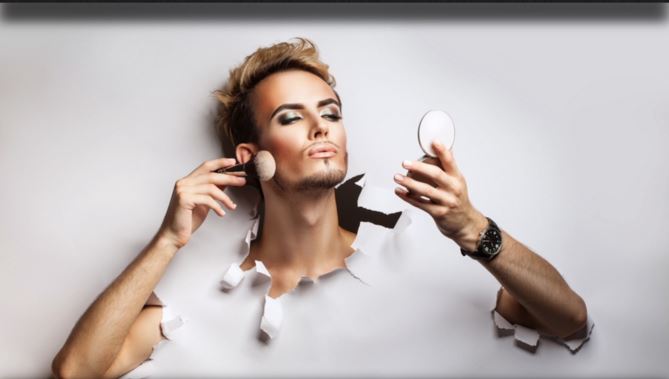 Asked how he could be so sure the man was a fake, Ford replied: “He has facial hair, a short haircut, arm hair, and he’s wearing a man’s watch. That’s not a transgender woman.”

Nothing a good waxing and makeover couldn’t remedy, of course, which makes one surmise that gender could be modified at a decent salon in an hour and a half.

Meanwhile, a Washington woman named Kristi Merrit has been attacked for posting pictures of herself on Facebook dressed up as a pirate and asking, “Does this make me a pirate?”

In another post, Merrit wore a Seattle Seahawks jersey and asked whether this was sufficient to turn her into quarterback Russell Wilson.

Finally, she posted a photo of a dress, high heels and a purse along with the query: “Then how does this make me a woman?”

“A man in a woman’s clothes does not make him a woman. Men should not get to be in our bathrooms or lockers! #?justWantPrivacy#? BeBold.” She wrote. 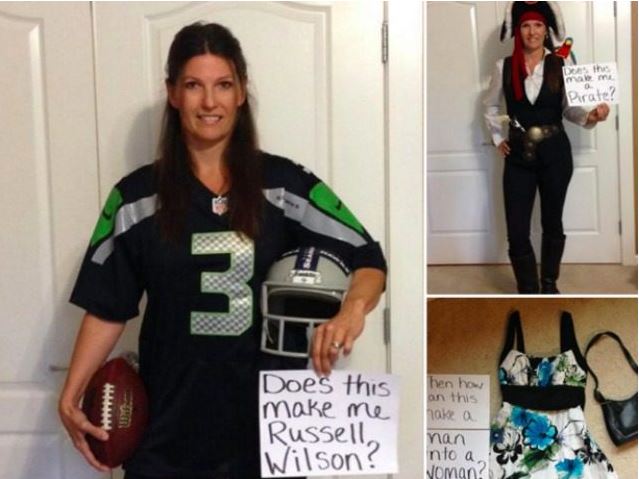 After her posts went viral, a number of furious transgender ideologues complained to Facebook in an attempt to have the posts forcibly removed.

The wildly divergent opinions underscore the confusion that reigns and the lengths that people are willing to go to, even to the point of denying the obvious, in order to pander to people’s desire to reconform reality to their wishes.

A recent video featuring conversations with a number of “millennial” college students illustrates people’s readiness to accommodate others beliefs about themselves.

Joseph Backholm, the director of Washington’s Family Policy Institute, interviewed a number of these students, beginning with the transgender question.

“So if I told you that I was a woman, what would your response be?” he asked.

The responses were what one would expect on a U.S. college campus: “I would say, good for you…”; “Nice to meet you…”; “I don’t have a problem with it.”

The interviewer then switched gears, probing just how far people’s self-identity might be under their own control.

“If I told you that I was Chinese, what would your response be?” he continued.

“I might be a little surprised, but I would say, ‘Good for you. Yeah, be who you are,’” one young woman responded.

Some of the students, however, seemed to draw the line at height, suggesting that perhaps some physical traits could not be denied.

“If I said that I am six feet five inches, what would you say?” the interviewer asked.

“That I would question,” one female student responded. “Why?” he countered. “Because you’re not,” she retorted, in a rare nod to reality.

Another summed up her opinion by saying: “I feel like it’s not my place, as like another human, to say someone is wrong or to draw lines or boundaries.”

Logic would suggest that if a person can challenge certain anatomical or genetic facts, then the same person should be able to challenge others as well. If one “believes” oneself to be black, or Asian, or 9-feet tall, or Napoleon, or a cartoon character, or a beagle—despite all the evidence to the contrary—why should they not be able to do so?

Drawing the line at sex seems ridiculously arbitrary and unfair.

In our brave new world of make-believe, everyone can see that the emperor is wearing no clothes. But if you are willing to close your eyes, he just might seem an empress.