Target’s stock price and its favorability among shoppers are crashing as the public rebukes the retail giant for ignoring their vigorous protest against mixed-sex changing rooms and bathrooms.

The company’s stock was two cents shy of $84 on April 19, when it revealed it would not allow shoppers to use single-sex bathrooms or changing rooms. Instead, all rooms were opened up to anyone claiming to be of either sex. As of 4.00 p.m. Friday, the stock had dropped almost $4.50, down to $79.50.

In between those two dates, more than one million people had signed a boycott petition sponsored by the American Family Association. Public opinion also shifted strongly in favor of single-sex bathrooms.

The damage to Target’s favorability is also being tracked by YouGov’s BrandIndex service.

By April 27, “The percentage of consumers who would consider buying items at Target the next time they want to go shopping at a department store dropped from 42% to 38% over the past two weeks,” YouGov reported April 29. That’s a 10 percent drop, likely fueled by social-media conversations via Facebook and various news sites.

Just closed our #redcard. @Target increased vulnerability of millions of women & children to cater to the comfort of very few. #disappointed

Worse, YouGov showed that Target was hit by a 40 percent drop — from roughly 19 percent down to 11 percent — when consumers were indirectly asked if they planned to buy at Target. “When you are in the market next to purchase items in this particular category, from which of the following brands would you consider purchasing?” YouGov asked.

YouGov also reported customers were hearing bad news about the company. When asked, “If you’ve heard anything about the brand in the last two weeks, through advertising, news or word of mouth, was it positive or negative?” the positive “Buzz” score of 19 fell down to 11.

Under Target’s new policy, transgender people are free to use either male or female bathrooms, even though many male and female customers, and parents of young kids, object to the open door policy.

Despite the widespread opposition, disputes at Target stores will be rare because transgenders comprise only about o.03 percent of the population. That’s only about one in every 2,400 people, according to a study of the 2010 census data.

But the company’s determination to push the unpopular transgender policy, over the objections of parents and people worried about harassment, is turning the dispute into a fight over the company’s disregard for its middle class customers. In fact, advocates of the policy say it will help Target gain more liberal upper income customers.

Behind the scenes, however, advocates for the anti-consumer policy are fighting back against the public. For example, YouGov is now refusing to comment on the study that shows damage to Target. “YouGov BrandIndex is no longer commenting on this research. I’m sorry we can’t accommodate you at this time,” YouGov told Breitbart News.

However, prior reporting on Target by YouGov shows the pro-transgender policy has pushed the company’s reputation to near-record lows.

In 2013, the failure of Target to protect the privacy of its consumers’ financial records caused a 45-point drop in the company’s news-driven “Buzz” score. “Target’s Buzz score for the week leading up to the data breach announcement was 26. One day later, it was -9, representing a drop of 35 points. Today, the Buzz score is -19, making the drop now 45 points. Since June 2007, the lowest Buzz score Target has ever received was around positive 10,” YoGov reported in 2013.

But the April 29 Buzz score was 11, just before the boycott  was signed by the millionth customer.

Also, the damage is being done even though the nation’s establishment media outlets are largely ignoring the huge consumer rejection of Target’s pro-transgender rule.

The public’s rebuke of the company has been almost ignored by the Washington Post and ABC, while the limited coverage at the New York Times, NBC and CBS have been favorable to Target. 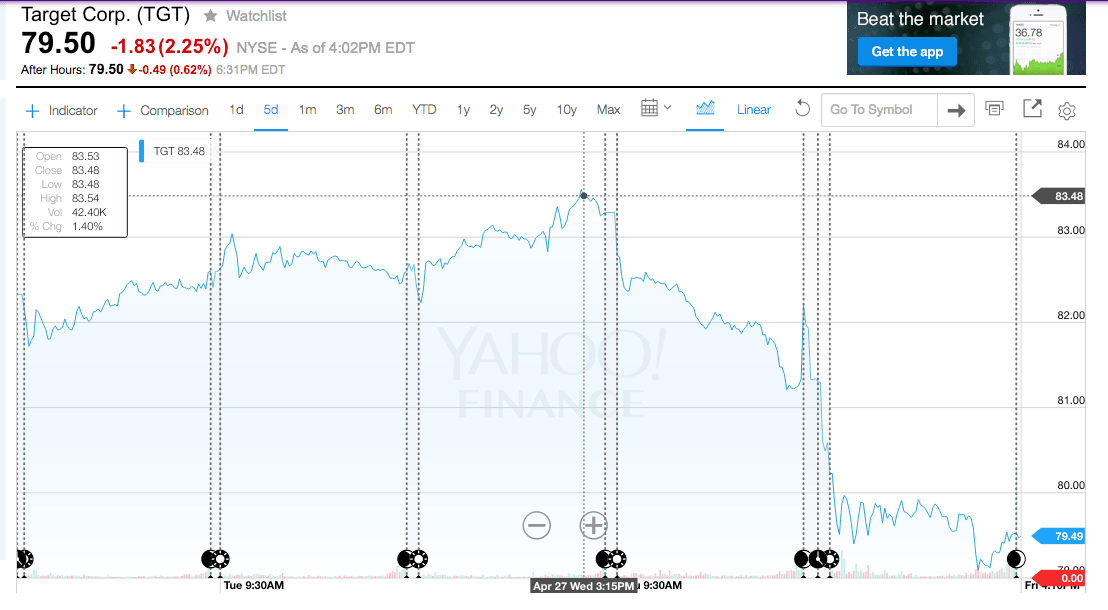