A record number of Central American youths and ‘family units” migrated into the United States in 2016, as President Barack Obama directs border officers to help the migrants apply for asylum, jobs and Green Cards.

The taxpayers’ cost of Obama’s migration is also getting close to $200 billion, when measured over the next 75 years.

The Department of Homeland Security admitted Monday that a record 70,297 people in Central American “family units”  arrived during the fiscal 2016 migration, from Oct. 1, 2015 to Sept. 3o, 2016, according to the Department of Homeland Security. In addition, another 46,893 young men, youths and boys — dubbed “unaccompanied alien children” or “UACs” — from Central America presented themselves at the border to apply for asylum under Obama’s migration process.

Those numbers exclude large number of border-crossing Mexicans adults, youths and children. Mexicans aren’t supposed to be allowed to apply for asylum, and should be quickly returned home, according to administration officials.

The numbers also exclude roughly 280,000 illegal immigrants from many countries were caught at the border in the last 12 months. That’s up from roughly 275,000 would-be illegals caught in 2015, not counting the 62,720 central Americans who crossed in 2015 seeking asylum.

So far, very few of Obama’s Central American migrants have been sent home, despite public opinion. That’s partly because the GOP-led Congress has not used its spending power to limit Obama’s welcome for the migrants. In fact, top GOP leaders welcome the arrival of more foreign workers to work in favored low-wage industries.

Before Obama changed the rules in 2010 and 2011, Central American migrants who tried to sneak across the border were routinely sent home by the border patrol. Since Obama quietly changed the rules, migrants from Central American — chiefly El Salvador, Honduras and Guatemala — are now welcomed across the border to legally begin the years-long process of requesting asylum, and are sent to local bus stations so they move to cities around the nation.

While they’re waiting for their court dates, Obama allows the migrants to compete against Americans for jobs and also to crowd into already-failing American schools in California and Maryland, Massachusetts and Colorado and many other states. Obama has even set up a process where Central Americans can apply to the local U.S. embassy for approval to migrate into the United States.

But he knows his migration is deeply unpopular, so he’s only offering the asylum deal to Central Americans under the media-magnified claim that they’re fleeing violence. In contrast, the cross-border flow of Mexicans has been kept down, in part, because they’re not supposed to be allowed file for asylum. For example, the number of Mexican youths who crossed the border in 2014 was 15,634, and was just 11,926 in 2016.

Those 75-year costs of the 300,000 migrants could be paid if the federal government were to deposit $69 billion in cash into an interest-bearing bank account this year, according to a recent study by the National Academies of Sciences, Engineering, and Medicine.

However, the federal government is already running a huge deficit of $578 billion in 2016. So it will pay the cost of each migrant year-by-year over the next 75 years.

That year-by-year payment drives up the cost of each unskilled migrant to roughly $640,000 in spending over the next 75 years, according to an analysis by Robert Rector at the Heritage Foundation.

The two formula predict the cost of the 300,000 Central American migrants will be rise from $69 billion if fully paid this year, to above $192 billion if paid year-by-year, according to the National Academies’ study and cost-calculator, and Rector’s year-by-year analysis.

All that spending on migrants is a huge boon for teachers’ unions and also business, because it means taxpayers’ dollars will be routed via the migrants towards the companies that own shops and restaurants, furniture-makers, auto-sellers and advertising companies. It is also good for Spanish-language media companies, and for media eager to report growing vibrant diversity in the United States.

The academies’ cost estimate per migrant is buried deep in its new 495-page report, which says the “75-year present value”  cost estimate for each unskilled immigrant is $231,000, assuming current federal spending plans continue without substantial change.

The term, ‘present value,’ is a way of describing how much money must be deposited in an interest-bearing bank account to pay for the near-term and far-term economic costs of migrants over the next 75 years. That costs include the healthcare, policing, educating and retirement cost of all average migrants. Roughly speaking, it means that every American with a job has to put $660 today into a bank to pay their share of the $102 billion in “present value” cost of Obama’s migration.

The problem with a “present value” calculation is that the government does not set aside money in interest-bearing accounts. Instead, it pays the costs year-by-year, aided by a relative trickle of taxes from the new immigrants.

Over their lifetime, however, the year-by-year per-person total cost of unskilled migrants balloons to $640,000, says Rector, an economist at the Heritage Foundation. In a recent article, Rector wrote;

Converting a net present value figure into future outlays requires information on the exact timing of future costs that are not provided by the National Academies. However, a rough estimate of the future net outlays (benefits minus taxes) for the 4 million adult immigrants without a high school degree who have entered the U.S. since 2000 is perhaps $2.6 trillion.

Those fiscal costs co-exist with the salary cuts caused by cheap-labor immigration.

The huge scale of legal and illegal immigration over the last few decades has flattened wages and salaries for many Americans. That government-engineered labor supply has flooded the labor market, so imposing an “immigration tax” of roughly 5.2 percent, or $500 billion per year, on wages and salaries earned by Americans and establishment immigrants, according to the National Academies’ report.

In turn, that $500 billion is transferred to the the newest cheap-labor immigrants, and to the employers, investors and shareholders who gain from lower salaries.

The Department of Homeland Security press release includes this data for Central American migration. Data about the migration of “family units” before 2015 is obscured. 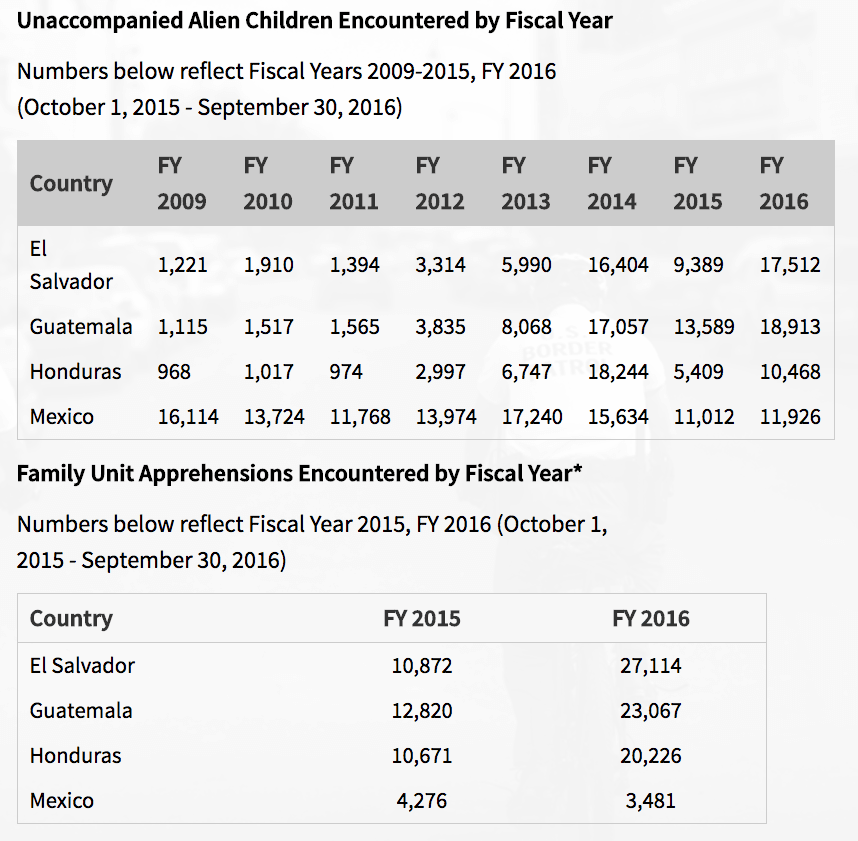 The DHS press release also includes two charts showing the rise of the migration. The black lines show the 2016 inflow. However, this data include many Mexicans, who are not supposed to be allowed to claim asylum. 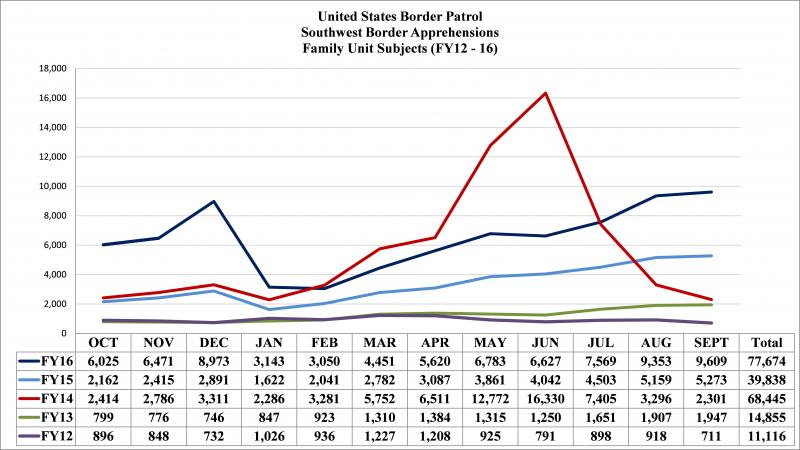 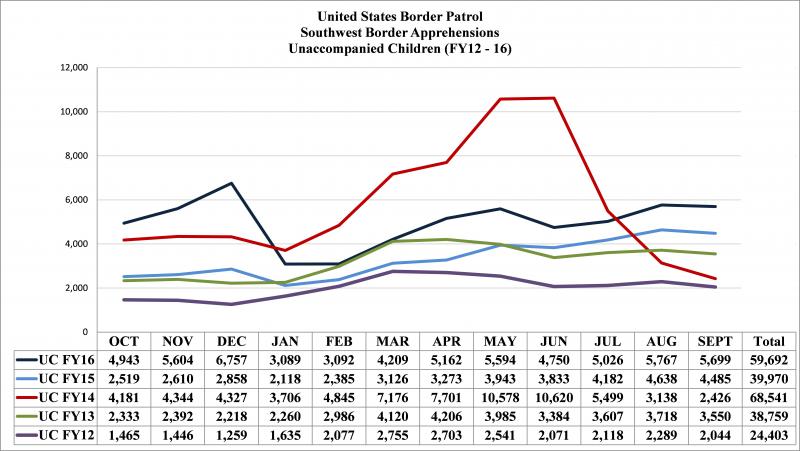