FBI Director James Comey released a memo to his agents explaining his decision to reopen the criminal investigation against Hillary Clinton.

“We don’t ordinarily tell Congress about ongoing investigations, but here I feel an obligation to do so given that I testified repeatedly in recent months that our investigation was completed,” Comey said in his memo, which was first publicized by Fox News.

Yesterday, the investigative team briefed me on their recommendation with respect to seeking access to emails that have recently been found in an unrelated case. Because those emails appear to be pertinent to our investigation, I agreed that we should take appropriate steps to obtain and review them.

The memo was sent just after he told eight Democratic leaders and eight Republican leaders on Capitol Hill about his decision to link the emails found during the criminal investigation into former Rep. Anthony Weiner’s online activities, to the completed investigation of Hillary Clinton’s handling of classified information. The emails were found in Weiner’s electronics, partly because his wife — Huma Abedin — is Hillary Clinton’s top advisor.

“I also think it would be misleading to the American people were we not to supplement the record,” Comey wrote.

At the same time, however, given that we do not know the significance of this newly discovered collection of emails, I don’t want to create a misleading impression. In trying to strike that balance, in a brief letter, and in the middle of an election season, there is significant risk of being misunderstood, but I wanted you to hear directly from me about it. 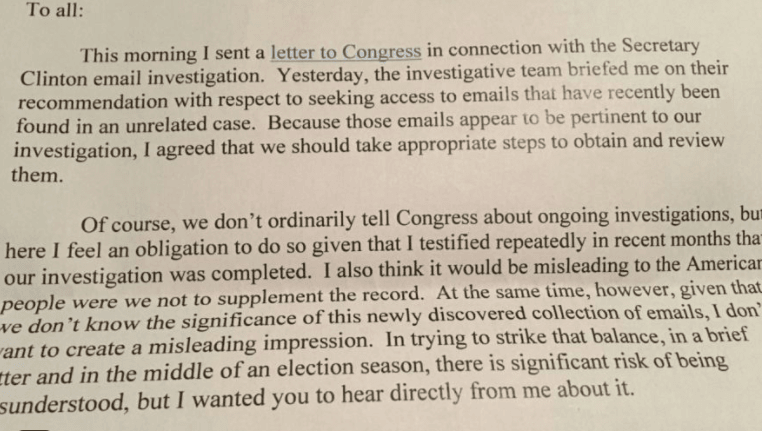 In recent weeks, Comey has come under increasing criticism for his decision to not urge a federal prosecution of Clinton for mishandling secret information, as new evidence has emerged that suggests top FBI officials ignored evidence and were rewarded by Democratic officials.