An 11-year old boy was assaulted by several classmates in his Texas classroom, after he said he supported Donald Trump in a school mock-election.

School officials suspended the children suspected of the attack, which took place Nov. 9 at the Stafford intermediate school near Houston, Texas, according to Fox 26.

“This is America,” said Mary Lemmon, the mother of attacked child. “Everyone has the right to their own opinion, and they shouldn’t be beat up for it.”

“That’s what America’s about,” said the child’s father Buddy Lemmon. “We had to respect the last election results, and I feel like everyone should respect this election’s results.”

These boys decided to ask the classroom, ‘Who voted for Donald Trump?’ And then I said, ‘I did.’ And then they come over here and jerked me out of my seat,” said the student. “Before I could get up they started kicking me and punching me … [it] felt like it was forever.

The school’s students are mostly poor, 5 percent white, 45 percent Hispanic, and 40 percent black, reflecting the expanding diversity of Texas since immigration rules were relaxed in 1965. “13% of the Stafford Intermediate School students are ‘limited in English proficiency.’ 59% of the 527 students here are classified as “economically disadvantaged”, and 69% have subsidized lunches,” according to Zillow.com.

A statement from the school said:

The Stafford Municipal School District is investigating an altercation that took place on its Intermediate School campus on Wednesday morning. The students allegedly involved in the altercation have been suspended, pending an investigation.

Upon completion of the investigation, consequences will be applied in line with the District’s Code of Conduct.

The Stafford Municipal School District works diligently to ensure a safe environment for all students and staff and will not tolerate aggression of any kind.

Technically, an “altercation” is an argument or disagreement, not an assault.

Nationwide, examples of violent victimization have been rising since 2009, after falling for the prior 16 years, according to a federal report. 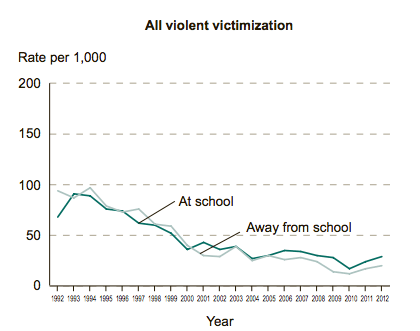 Read the most recent federal report on school violence here.