The federal government has failed to narrow the income gap between whites and blacks in the forty-six years since 1970, according to academics at Duke University and the University of Chicago.

While Africans-Americans who graduate from good colleges have narrowed their income gap with white college-graduates, partly because of government intervention, such elite progress been washed out by a widening gap at the middle and lower end of society, says the November study from the National Bureau of Economic Research.

“At the bottom and middle of the earnings distribution, structural changes to the labor market over the past several decades have overwhelmed these gains, causing both the racial working gap and median earnings gap to widen significantly since 1970,” said the report, titled “Divergent Paths: Structural Change, Economic Rank, and the Evolution of Black-White Earnings Differences, 1940-2014.”

The structural changes have had a huge impact on lower-skilled Africans-Americans — and on similar whites, says the report. “Our analysis points to the incredible lack of progress and, in many case, regress in closing the gaps in labor market outcomes for black and white men in the United States over the past seven-plus decades,” says the report.

The picture is made worse by also measuring the income of men who have fallen out of the workforce, either via criminal convictions or long-term unemployment. “In fact, measured this way, the racial earnings gap at the median had returned in 2010 to 1950 levels,” says the report. “When the number of men with zero earnings is taken into account, the level of earnings inequality among black men in the United States would rank among the most unequal countries in the world,” the report says.

The report’s data includes five years from the tenure of Obama. Before he became president in 2009, he boosted the federal regulations which grew the property bubble that eventually slashed the wealth of African-Americans. As president, he sharply increased immigration, even though he has said repeatedly that immigration lowers wages.

According to the new report:

In the lower parts of the earnings distribution, the significant increases in the racial incarceration, [people falling] out of the labor force, and unemployment gaps since 1970, have especially devastated the working lives of poor black men. In the heart of the Great Recession, for example, fully 37.8 percent of prime aged black men were not working compared to 18.6 percent of white men.

Figure 2 in the report shows that incomes stopped rising shortly after the 1965 immigration law began to greatly increase the supply of new labor — and that the income gap between white and black men has not arrowed since then. 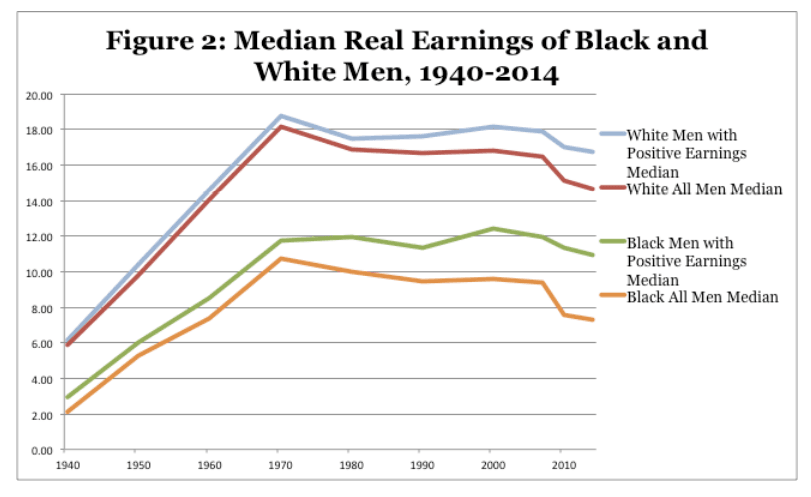 The report minimizes the apparent impact of cheap-labor immigration, giving only one mention to “immigration.”

However, the report repeatedly notes that the number of working Americans has dropped sharply since the 1965 immigration taps were opened.

A particularly striking feature of the labor market since 1980 has been the sharp reduction in the probability of working for both black and white men due to rising rates of incarceration and declining labor force participation … the especially rapid increase from 1970-2014 in the fraction of black men with zero earnings has been primarily driven by the deteriorating labor market prospects of all low skilled men. … There have also been massive changes in labor force participation rates, which have fallen sharply for both black and white men since the middle of the 20th Century. While 8.6 percent of black men were out of the labor force (and not in prison) in 1960, this figure peaked at 19.4 percent in 2010 and remains above 16 percent in the 2007-14 samples. The increase in the share of white men out of the labor force has been similarly dramatic.

White House officials have also admitted the rising number of people outside the labor market, which is now at the level of five simultaneous recessions, says President Barack Obama’s chief economics advisor. Other groups have noted the huge economic impact of cheap-labor immigration. For example, the September report on immigration by the National Academies of Sciences shows that cheap immigration labor cuts Americans’ salaries and wages by roughly $500 billion per year. That money is nearly all transferred to employers and investors.

The good news in the report is that better-educated African-Americans have almost closed the income gap with similar whites.

This chart shows that narrowing gap for people at the 90th percentile of academic skills. 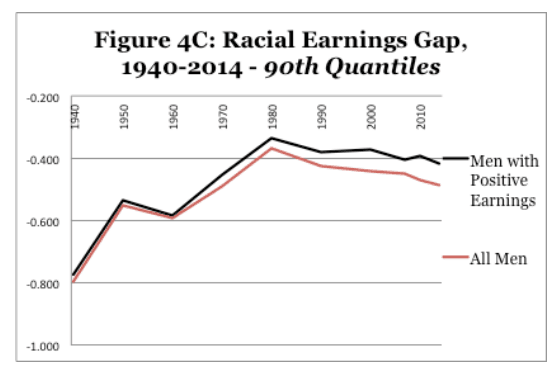 The gap was reduced, in part, by government intervention to reduce discrimination and to help high-achieving young people get to college. The gap was also reduced because the upper-income professions gradually discarded racial distinctions and barriers.

This chart shows the widening gap between the mid-point of the most skilled and the least skilled black and white workers: 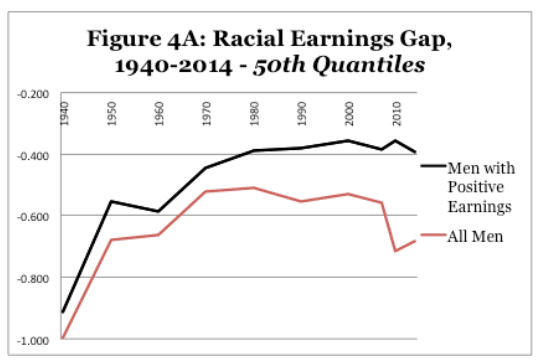