The Kellogg Company’s namesake nonprofit, the W.K. Kellogg Foundation, has given over half a million dollars to the community organizing group Black Alliance for Just Immigration (BAJI), a pro-open borders group headed by Opal Tometi, one of the three co-founders of the Black Lives Matter movement.

Tometi is currently the Executive Director of BAJI, but has previously served as both Co-Director and Communications Director of the organization, which was formed in 2006 and describes itself as “an education and advocacy group comprised of African Americans and black immigrants from Africa, Latin American and the Caribbean.”

In a recent video responding to the election of Donald Trump, Tometi urges a coalition of “black, brown, native, Muslim, immigrant, LGBTQ, folks with [criminal] records, folks with disabilities, and poor communities” to fight “violence” and “fascism” during the Trump administration. She states that they “must perfect the art of organizing people,” and that “if you’re white, your work is to organize other people to donate and challenge white supremacy, and if you find yourself in melanin spaces, learn to take direction from us.”

Black Lives Matter was co-founded by three women: Patrisse Cullors, Alicia Garza and Opal Tometi. Two of them—Garza and Tometi—are and have been employed by immigration reform groups. Tometi, as mentioned earlier, is the Executive Director of BAJI, and Garza has served as the Executive Director of POWER, which later merged with the noted pro-illegal immigration group Causa Justa :: Just Cause.

The W.K. Kellogg Foundation recently gave BAJI $450,000 in what appears to be a general grant to help fund the group from November 2016 until 2019. The grant’s stated purpose is to:

An earlier grant from the W.K. Kellogg Foundation gave BAJI $75,000 to:

Since the Kellogg Company has said that they were pulling advertising from Breitbart News because Breitbart doesn’t match their “values,” it’s worth looking at the values the company, through its namesake nonprofit arm the W.K. Kellogg Foundation, is supporting with the $525,000 donation to BAJI.

BAJI Executive Director Opal Tometi is an admirer of convicted cop killer and terrorist Assata Shakur. In the video below, Tometi is seen with Black Lives Matter co-founder Patrisse Cullors leading a group of women in “Assata’s Prayer,” a chant that is common at leftist rallies and that Cullors says is used at every Black Lives Matter event, action, and shut-down.

The above video is from the keynote event at a BlogHer conference in New York City, where Essence magazine Editor-in-Chief Vanessa De Luca interviewed Cullors and Tometi, who described their respect for the convicted criminal communist Shakur.

In the video, Cullors tells the crowd:

So this is how we close out every meeting, every event, every action, every freeway we’ve shut down, every mall we’ve shut down, you’ll hear this chant reverberated throughout this country. And you’ll hear it in other countries, now, too. This is from our beloved Assata Shakur, who is on the number one FBI most-wanted list, and she’s a powerful leader who we are inspired by. Many of us have “Assata Taught Me” sweaters. So it’s three times, and we’re going to start off with a whisper, and you’re going to just repeat it:

The lines come from a letter that Shakur wrote titled “To My People,” where she describes herself as a “Black revolutionary” who “declared war on the rich who prosper on our poverty, the politicians who lie to us with smiling faces, and all the mindless, heart-less robots who protect them and their property.”

Shakur is a hero to communist revolutionaries for her involvement in the 1960s and 1970s with a violent, criminal Black Panther Party offshoot called the Black Liberation Army. Shakur and the group robbed several banks as a “revolutionary act” and eventually killed a New Jersey State Trooper with his own gun after a highway stop in 1973.

After her conviction, Shakur escaped prison when other Black Liberation Army members visiting her pulled a gun and took guards hostage. Shakur lived on the lam for several years, as her associates refused to cooperate with authorities, until fleeing to Cuba in 1984. Shakur has also been lionized by ’60s radicals like the Weather Underground’s Kathy Boudin, who had named her son Chesa after Shakur’s real name, JoAnne Chesimard. 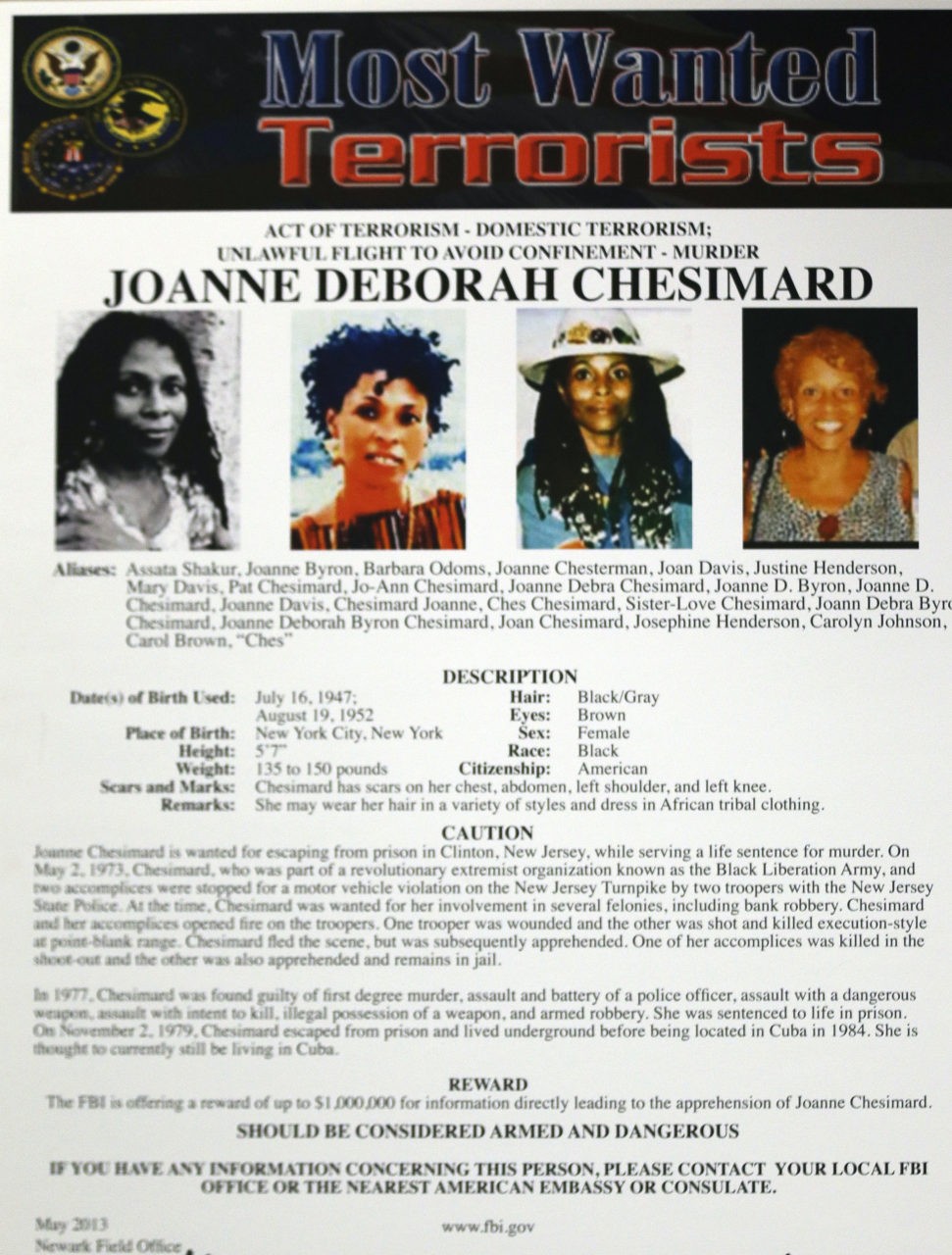 A poster with photographs of Joanne Chesimard (aka Assata Shakur), a convicted murderer and fugitive for more than 30 years, was on display during a news conference in Newark, N.J., on May 2, 2013 — the 40th anniversary of the violent confrontation that led to the slaying of a New Jersey state trooper. The reward for her capture and return was doubled to $2 million, and the FBI made Chesimard, now living in Cuba, the first woman on its list of most wanted terrorists. (AP Photo/Julio Cortez)

BAJI has also employed another high profile Black Lives Matter activist named Tia Oso, who put herself in the national spotlight when she took to the stage at the 2015 Netroots Nation conference and helped shut down appearances by two Democrats running for President, former Maryland Governor Martin O’Malley and Vermont Senator Bernie Sanders.

Her biography does not mention that Ms. Oso is a convicted felon who took money from another community group she worked with.

As the Phoenix New Times reported :

While working as the business manager for the Arizona Citizens for the Arts/Arizona Action for the Arts in 2007 and 2008, a job she includes in her online résumé, Oso issued checks to herself, made unauthorized withdrawals and made personal charges on the organization’s credit card. The theft occurred over the course of a year and totalled about $11,000, court records show.

Oso had walked off the job in May 2008 without explanation “after being counseled about absences and performance-related issues,” records state. She was fired after she failed to show up for work for three days, and the embezzlement was apparently discovered soon afterward.

Twenty-seven at the time, Oso confessed to court officials that she used the money to pay rent, make car payments, and “stabilize her financial situation.”

She pleaded guilty to one count of felony theft.