A new survey shows that fewer than one-in-four Americans agree that people should be allowed to freely change their legal sex by switching their preferred “gender identity.”

Only 22.7 percent of people in the poll said people should be allowed to change their recorded sex or “gender identity” on government documents whenever they wish, said the poll. That political support from progressives for “gender fluid” laws is far greater than the estimated 0.04 percent of the population which wishes to live as members of the opposite sex.

In contrast, 44.6 percent of respondents said people should be allowed to switch their legal sex, but only after first complying with medical or government criteria.

The lopsided results were revealed in a survey conducted by Ipsos for the Williams Institute, a pro-transgender advocacy group at the University of California at Los Angeles. The institute downplayed Americans’ views by touting the views of foreigners in Peru, Sweden, Turkey,  Belgium, and other countries, all of whom are entitled to set their own national rules on sex.

The Williams organization also did not reveal the precise language of the questions, which can skew the respondents’ answers. For example, the press release from the Williams Institute steals a political base or two by declaring the existence of “Transgender Rights,” even though the sought-after legal rights have not been approved by voters in the United States.

The lopsidedly normal results in the poll are a problem for gay groups and other progressives, who insist that people be allowed to freely change their legal sex, even without surgery or medical checks.

That radical position is intended by gay groups and feminists to blur the normal sex distinctions that are the basis of male and female civic institutions. If won via a court case, their goal would fundamentally transform single-sex sports leagues and women’s shelters; free speech, law enforcement, and social cooperation; science education, parental guidance of children’s sexual development and health, such as the Boy Scouts.

That anti-sex goal is opposed by most conservatives, most moderates and by some gays, former transgender people, and feminists.

However, President Barack Obama’s deputies accepted that gender-beats-sex claim in 2016 by formally insisting that the federal definition of a person’s sex — their biology — be replaced by a person’s chosen “gender identity.” This means that a man, according to the White House, could be a legal male in the morning and a legal female in the afternoon — and other Americans must treat him as a male or female according to his current preferences, regardless of science or the impact on single-sex civic institutions.

This revolutionary political push has a revolutionary goal — to equalize the social status of minority sexual cultures with the status of heterosexual families who birth and rear each new generation of Americans. That goal requires that Americans show as much respect to a childless gay man as they do to heterosexual parents who risk decades of their lives, and spend a huge amount of their money, trying to birth and raise several accomplished children.

That goal is deeply unpopular among Americas. An April poll by Civitas showed that only 7 percent of 600 North Carolinians supported a judge’s demand “ordering girls and boys in public middle schools to share locker room, bathroom and shower facilities.” The demand was strongly opposed by 72 percent of respondents.

The vast majority of Americans have long recognized the existence of people who wish to live as members of the other sex. Americans’ polite live-and-let-live culture allows them to ignore most occasions when the reality becomes apparent, and even to support some legal conveniences for men and women trying to accomplish the very difficult goal of living as members of other sex.

For example, North Carolina’s compromise HB-2 law allows people to change their legal sex after undergoing medical procedures. That law was passed in April to block the city of Charlotte’s radical ordinance that allowed people to switch “gender identity” as they prefer.

The HB-2 compromise, however, is fiercely opposed by gay groups who insist that the reality of biological sex should be ignored in favor of individuals’ choices. The gay groups generally oppose any medical or scientific definitions of a person’s legal sex.

In November, the gay advocacy groups and their allies narrowly defeated the incumbent governor, Pat McCrory, after getting their business allies in universities and Silicon Valley to stage an apparent business boycott of the state.

However, the GOP legislature is refusing the repeal the compromise HB-2 law, which ensures that legislators — not judges, cities or individuals — can preserve the distinction between male and female by clearly setting the state-wide legal definition of male and female.

Update: Full details about the poll can be downloaded here. The critical table is on page 90 of the longer file, and it shows how the respondents’ attitudes vary by sex, age, region, income and class. 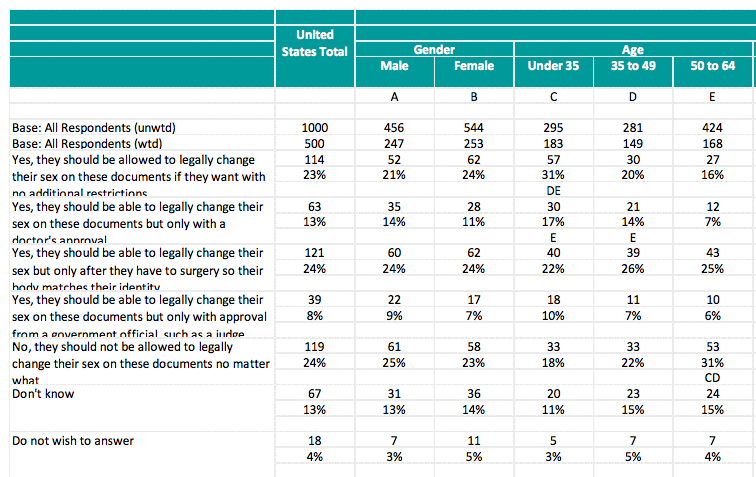 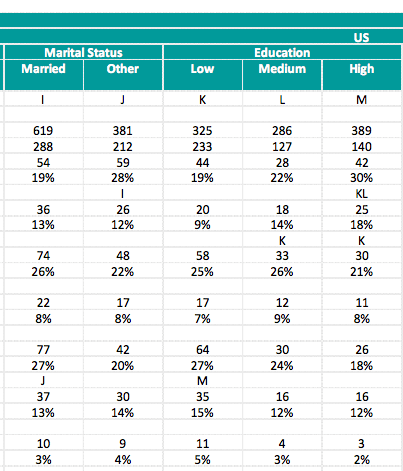 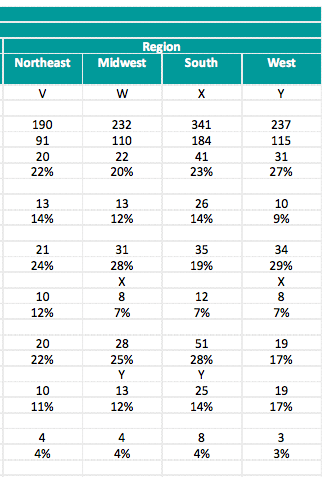