“With [Japanese] unemployment down to 2.8 percent, companies are starting to recognize the need to lock in staff before the hiring pool disappears … this means paying them more,” wrote Daniel Moss, the executive editor of Bloomberg News for global economics. He continued:

This week’s GDP report suggests that it may have arrived. As Kathy Matsui, vice chair and chief Japan equity strategist at Goldman Sachs Group Inc., told Bloomberg Television, domestic spending of the kind reported today couldn’t have happened without some wage growth.

The wage growth comes as the Japanese government urges companies to invest more in high-tech robots and to pay their workers more. 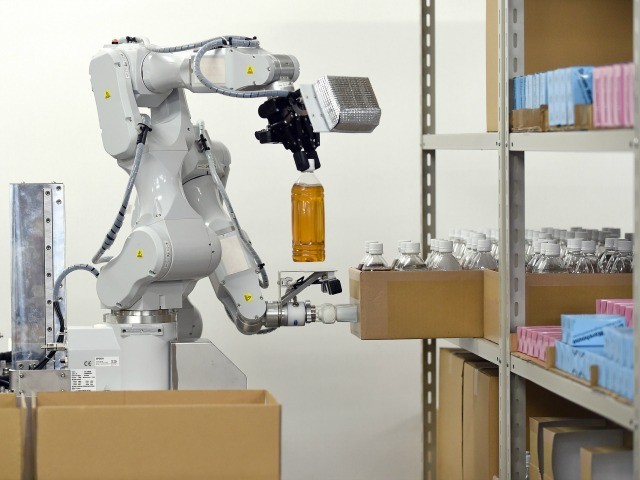 A prototype robot with two arms, which was developed by Japan’s comprehensive electrical machinery manufacturer Hitachi for distribution warehouses, demonstrates its abilities during a demonstration for the media at a warehouse in Noda, in suburban Tokyo, on August 25, 2015.

Despite the good news showing how wage increases and Japan’s robot-intensive high-tech economy are working in tandem to help the Japanese people, Moss urges the Asian nation to convert itself from a low-crime, homogenous nation into a high-immigration, multicultural shopping mall, saying:

it needs to either embrace large-scale immigration as a solution to labor shortages or make greater use of robots. While immigrants are filling some low-end jobs, there’s very little political support for allowing much more. And to be fair to Abe, opposition to immigration long preceded his premiership.

Robots and expanded artificial intelligence seem to be vastly more favored. That’s a pity. Imagine how much more vigor the current Japanese recovery would have if only there were more [non-Japanese] people around to buy more stuff.

Moss’ endorsement of more immigration into Japan’s high-wage labor market suggests he does not believe that immigrant workers will reduce wages in Japan. That interpretation is bolstered by a recent column Moss wrote about the U.S. economy, where he failed to mention immigration even as he complained that Americans’ wages are stalled despite an expanding economy. He wrote:

Disappointing wage growth has again tarnished an otherwise robust U.S. employment report … So to bring us back to the latest Labor Department stats: Why are pretty strong job reports the first Friday of every month so often accompanied by mediocre pay numbers? It’s a pattern we seem to have trouble breaking.

Moss noted that wages are growing in Japan because companies are competing for a limited pool of workers — yet he does not comment on the massive inflow of imported workers into the U.S. labor market. That inflow ensures that companies face much less competition for extra workers, even as the imported workers also boost the economy by spending their pay on food, transport, housing, and entertainment.

In fact, at least three economic forecasts — and recent wage data — say reductions in immigration will help boost wages for Americans. That is also the goal of President Donald Trump’s popular merit-immigration reform, now awaiting action in the Senate and House.

Many polls show that Americans are very generous, they do welcome individual immigrants, and they do want to like the idea of immigration. But the polls also show that most Americans are increasingly worried that large-scale legal immigration will change their country and disadvantage themselves and their children.