If, like me, you love the American Museum of Natural History (AMNH) in New York, here is a question I can guarantee you’ve never asked.

Never once — as you’ve circumnavigated the blue whale or gawped at those marvelous Teddy Roosevelt-style dioramas in the mammal halls or admired the T-Rex’s jagged 6-inch gnashers — have you paused in deep thought and mused to yourself: “Gee. I wonder if the guys who pay for all this stuff are Democrats or Republicans?” 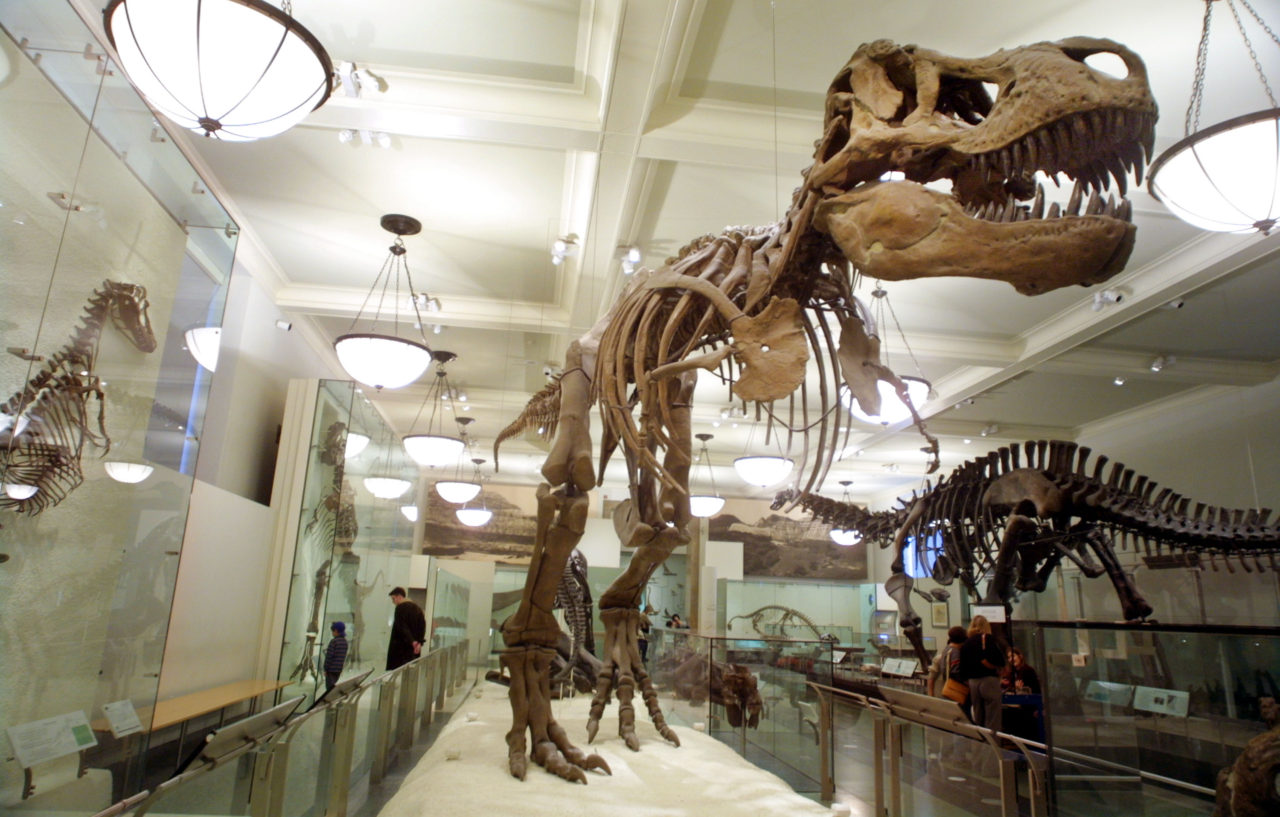 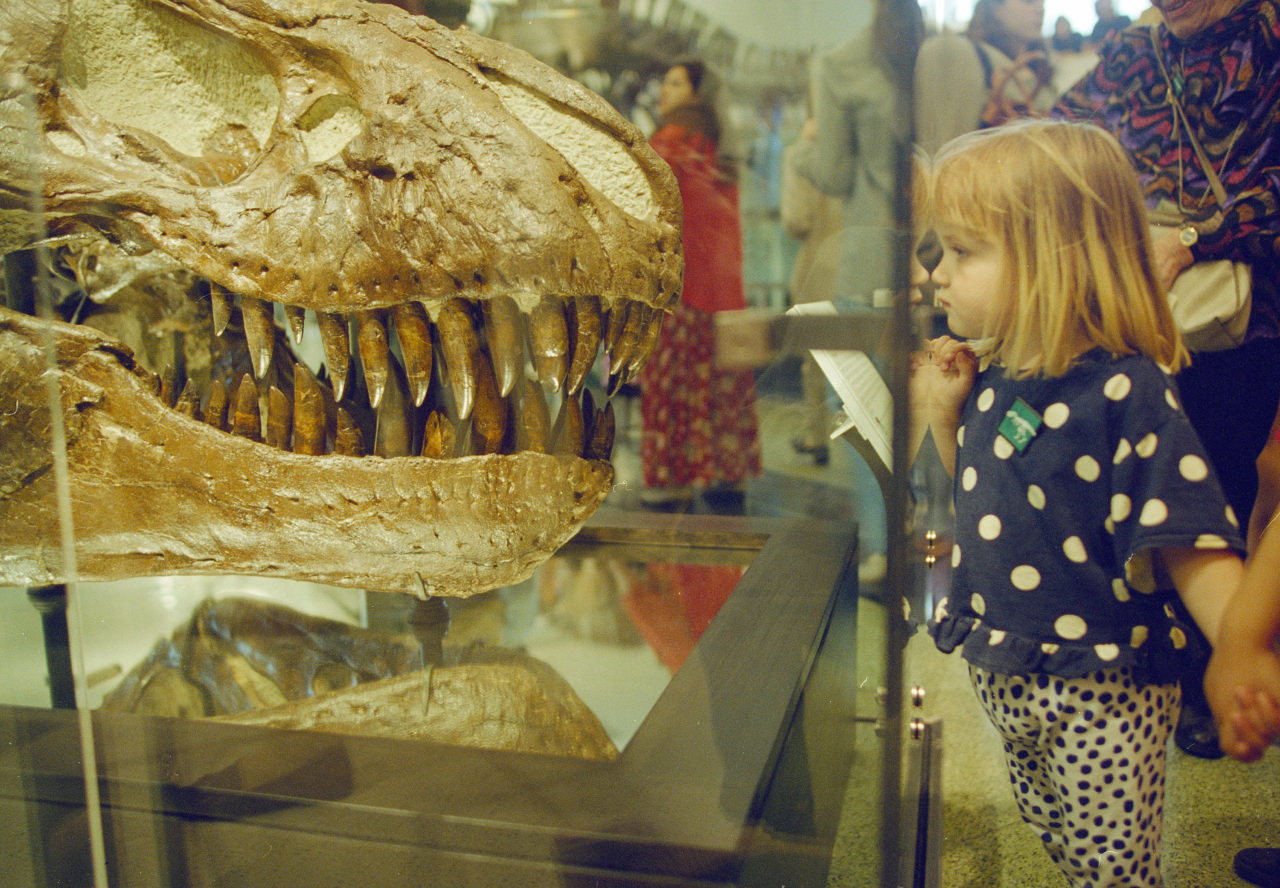 A little girl looks down the throat of a Tyrannosaurus Rex skull in the dinosaur hall in the American Museum of Natural History in New York. (AP Photo/Mark Lennihan)

The reason you’ve never had this thought is because you’re not stupid. Or at least, not that stupid.

You understand — because it’s so obvious that even one of the stuffed primates in the Akeley Hall of African Mammals could grasp this basic point — that the collections in the American Museum of Natural History  have nothing whatsoever to do with politics. They have to do with science, which is something completely different.

They really don’t mix and when people try to make them mix it’s a disaster. To believe otherwise, you’d have to deny all the evidence of history, know nothing about the scientific method and be really, really thick.

Thicker than a pickled cuttlefish in a jar of surgical spirit; dumber than a lobotomized mollusk; more basic than an amoeba with severe learning difficulties. 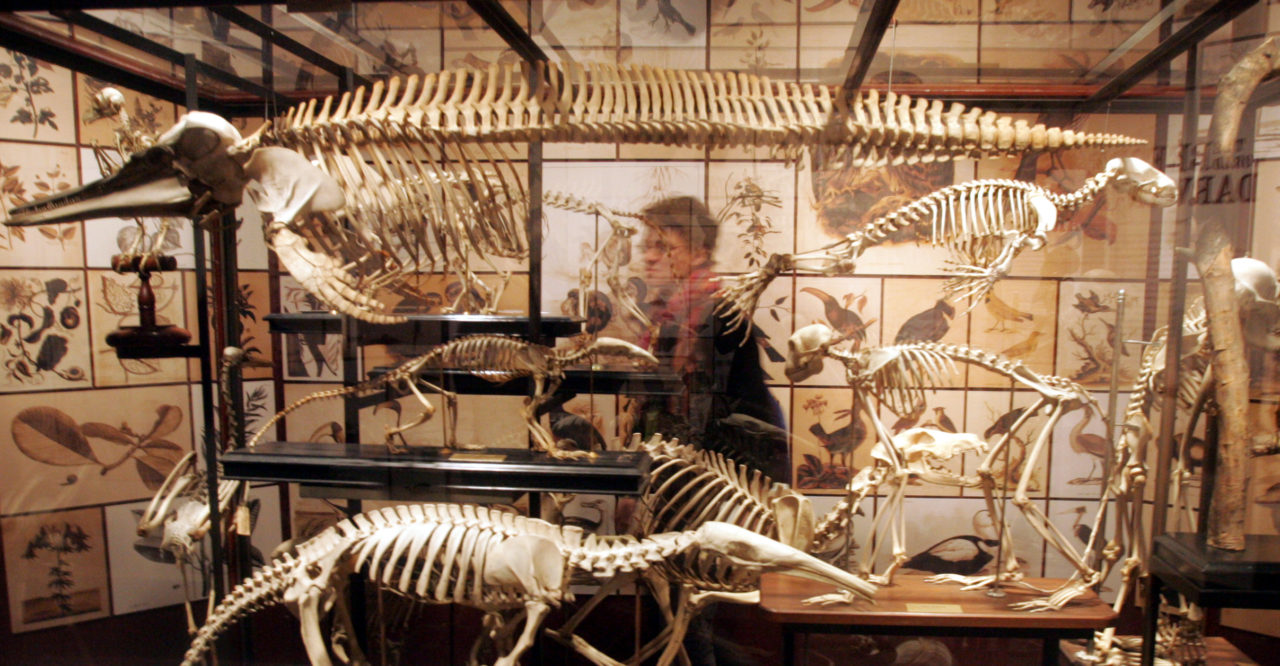 So bearing all this mind, what should we feel towards the bunch of 182 self-proclaimed “scientists” who have written an open letter to the AMNH demanding that it cut its links with trustees and donors whose politics they find objectionable?

My suggestion would be: a mix of pity, embarrassment, and disgust.

Plus, maybe, a judicious soupçon of horror that such imbeciles could have been given tenure at any academic institution where the teaching of impressionable young adults is involved even at all, let alone where it’s financed by hard-working U.S. taxpayers.

You have these ritzy sounding titles which seem to confer on you an aura of gravitas and scientific distinction. But by putting your names to this spectacularly dumb letter — of which more in a moment — you have relinquished all claim to be taken seriously as voices of scientific authority. You are all, basically, frauds.

Why? Because what you are engaging in here patently isn’t about science. Nor is it, as you profess, about the well-being and credibility of the American Museum of Natural History. No, this is about low-down, dirty political activism. It’s Antifa with a PhD.

Let’s examine in more detail what these fake-science terrorists are demanding in their letter.

Headed “Open Letter from Scientists to the American Museum of Natural History,” it begins with a paragraph wreathed in apparent high-mindedness and dispassionate concern.

The American Museum of Natural History in New York (AMNH) is a treasured and influential institution. Museums must be protected as sites that build understanding, help the public make meaning, and serve the common good. We are concerned that the vital role of science education institutions will be eroded by a loss of public trust if museums are associated with individuals and organizations known for rejecting climate science, opposing environmental regulation and clean energy initiatives, and blocking efforts to reduce pollutants and greenhouse gases.

Pretty soon, though, it shows its true colors:

Rebekah Mercer and the Mercer Family Foundation, political kingmakers and the financiers behind Breitbart News, are major funders of climate science denial projects such as the Heartland Institute, where they have donated nearly $6 million since 2008. The Mercer Family Foundation is also a top donor to the C02 Coalition and the Oregon Institute of Science and Medicine, institutions that assert that an increase in C02 emissions from fossil fuels will be a great benefit to plant and animal life on Earth.

Yup. Like I said this has nothing to do with science, let alone with concern for the integrity of the AMNH. This is a political hit job co-ordinated by a bunch of malicious, embittered second-raters. They’ve been losing the scientific argument on climate change for years, so instead they’re fighting back in the only way they know how: using dirty, underhand guerrilla tactics.

To give you an example of how desperately feeble their case is, here’s the Twitter thread that supposedly prompted the letter:

I am shocked and saddened to see the American Museum of Natural History @amnh promoting misinformation on climate change in its David M. Koch-funded Dinosaur Wing 1/ pic.twitter.com/mUkx6PDEml

This is so obviously a put up job it’s embarrassing. Read the label for yourself. In vain will you find anything “shocking” or “saddening.” It’s restrained, sensible, factually accurate: a model, in fact, of what the displays at the American Museum of Natural History should look like.

But Busch — an environmental economist, by the way, not a palaeoclimatologist or a geologist: so it’s not like he’s bringing any special expertise to the party — pretends to have been triggered by that stuff about warm cycles and ice ages.

First, we are indeed living in an “interglacial period” — it’s called the Holocene — which is what you call the warm bits between ice ages.

Second, these interglacials do indeed move in roughly 10,000 year cycles.

Third, given that we’re around 11,700 years into this particular interglacial, it is indeed quite possible that — as the label very sensibly concedes — we could be due for another ice age.

Yet even though all the stuff on the label is unexceptionable and factually accurate, Busch claims to be so appalled that he has been forced to throw his toys out of the pram on social media and demand a retraction.

David M. Koch Dinosaur Wing: “There is no reason to think another ice age won’t come”

Oh great. A single paper, published in Nature — an organ notorious for disseminating parti-pris studies pal-reviewed by climate alarmists on the scaremongering global warming gravy train. A paper, furthermore, which is dependent on the kind of computer models — “our simulations” — which have been repeatedly and comprehensively falsified by real world observations.

But then Busch gives the game away. As he reveals in his next tweet, his objection isn’t really scientific at all. It’s political. He doesn’t like the fact that this dinosaur hall in the museum is sponsored by a supporter of libertarian and conservative causes:

The American Museum of Natural History @amnh does a great job of explaining climate change accurately in its other exhibits. Why the obfuscation in the David M. Koch-funded Dinosaur Wing?
4/ pic.twitter.com/7PMxKeiKSn

I’ve loved visiting @amnh since I was a child. There may be no other institution more responsible for drawing me to science and the natural world. It’s collections and interpretations are, by and large, stellar. I hope it will separate this panel from its donor’s interest. 7/7

If Busch is really such a regular at the American Museum of Natural History, it’s surprising that he didn’t notice that terrible “error” on the label in the dinosaur hall before. It has been up there for at least 12 years. In fact, as Paul Homewood notes in this investigation, it may even date back to 1994 when Exxon funded the renovation of the fossil halls.

The fact that it has not been altered in that time would suggest that no one till now — not one single person out of all the millions of visitors who must have passed it in the interim  — has complained. (Possibly because you’d need to be something of a vexatious loon to imagine there was anything worth complaining about.)

We can infer this from the fact that as soon as someone did complain — Busch — the Museum caved within 24 hours. As Busch boasts in a follow up tweet:

UPDATE: Great news! After 25 years the American Museum of Natural History says it will review and update the misleading panel on climate change in its fossil wing. Can't wait to see the result. Thanks to everyone who contacted @amnh about this issue. pic.twitter.com/1lvThSnqcs

And all, apparently, because of what Jonah Busch generously describes as his “viral” tweet.

BLOG: I saw a misleading panel about climate change at the American Museum of Natural History. I tweeted about it. The tweet went viral. People's voices were heard. The museum responded and said they'll review and update the panel. I tell the story:https://t.co/iw0WCGg7cR

In this, as in so many of his claims, Busch is deluded. Even his first tweet was retweeted fewer than 2,000 times. That is hardly what you’d call “viral.” At best, you might call it bacterial: Busch and his boutique following of greenies, liberals, and fellow travelers on the climate change gravy train sniffing one another’s farts inside their ideological bubble and congratulating themselves on just how nice it smells.

So, to recap: a climate activist on Twitter cooks up a #fakenews story in which he claims, on no evidence, that the American Museum of Natural History’s scientific integrity is being corrupted by right-wing donors; though the story is factually inaccurate in almost every conceivable way, this #fakenews incident is then used as the pretext for an open letter to the museum by 182 other climate activists demanding that it take action to deal with this non-problem.

Last week thousands of people shared a Twitter comment by environmental economist Jonah Busch, PhD, who pointed out misleading information on climate science in an Exxon-funded exhibit at the American Museum of Natural History. To its credit, the AMNH’s response was swift: it committed to updating the outdated information to reflect the best available science. But the initial online public anger showed that trust in the museum is undermined by the museum’s association with climate science opponents.

It concludes by demanding:

This is outrageous. Allow me to spell out why.

The signatories of that letter make a big deal of the fact that their primary concern is the museum’s credibility.

But what could be more damaging to a museum’s credibility than if it were to fire some of its most generous, committed trustees, to cut off part of its income stream, and to change the factually accurate labelling on its exhibits purely to accommodate the petulant demands of a shrill bully mob of left-leaning academics who have rejected science in favour of political activism?

This attempt by a gang of self appointed, second rate scientists to exclude people from jobs with public bodies, or indeed any sort of association at all, simply because of their politics, is extremely dangerous.

It is the sort of behaviour one would normally associate with communist and fascist juntas, and needs to be fought tooth and nail. 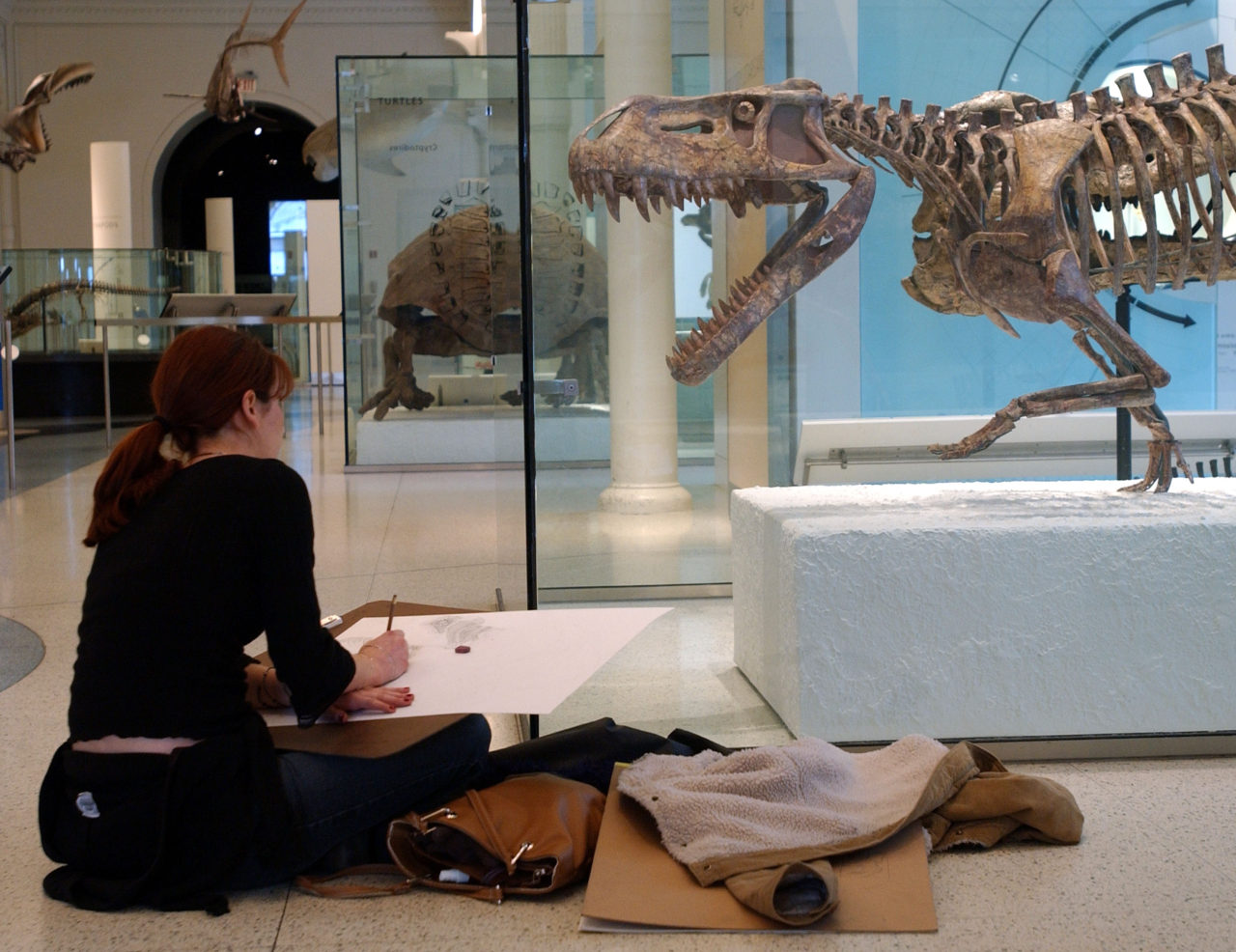 A woman sketches a dinosaur at the Museum of Natural History in New York City. (Spencer Platt/Getty Images)