Americans came up with 36 answers to a Gallup poll asking the biggest problem currently facing the country, and no one answered “climate change,” with only two percent even mentioning the environment at all, Gallup revealed last week.

In a random poll of 1033 U.S. adults, immigration topped the list as the greatest problem faced by the United States at this moment, with 22 percent offering that response. While 17 percent responded that dissatisfaction with government was the biggest issue, others proposed race relations, national disunity, healthcare, and family decline.

Missing from Gallup’s list of causes garnering at least 3 percent of responses was the vague category of “Environment/Pollution,” which drew only 2 percent. 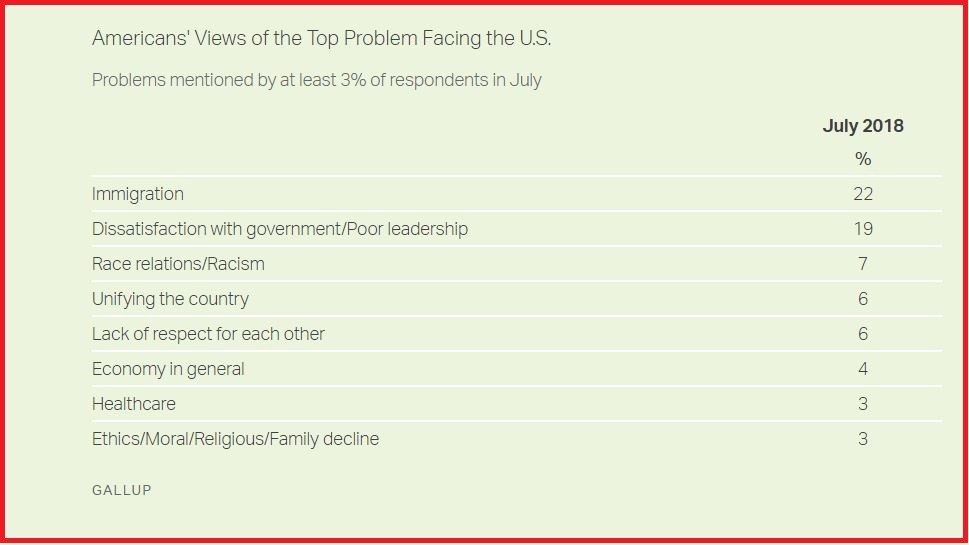 The new poll seems to signal a major disconnect between certain progressive leaders and the American people at large.

Last month, for instance, the Berkeley City Council issued a resolution declaring a worldwide climate emergency, calling it “the greatest crisis in history” after evoking memories of World War II.

“The United States of America has disproportionately contributed to the climate and ecological crises and to preventing a transition away from fossil fuels, and Americans thus bear an extraordinary responsibility to solve the crises,” the text reads.

While World War II involved the slaughter of six million as well as tens of millions of casualties, yet somehow the Berkeley City Council believes it was a lesser evil than the overarching problem of climate change, saying that the earth is “already too hot for safety and justice.”

Former President Barack Obama famously told the U.S. Coast Guard in 2015 that his administration considered climate change to be the most severe threat to national security.

“I am here today to say that climate change constitutes a serious threat to global security, an immediate risk to our national security, and, make no mistake, it will impact how our military defends our country,” the president told graduates of the Coast Guard Academy.

The following year, U.S. Secretary of State John Kerry compared the effects of climate change to Islamic terrorism, suggesting that the two pose an equivalent danger to the peoples of the world.

“Yesterday, I met in Washington with 45 nations – defense ministers and foreign ministers – as we were working together on the challenge of Daesh, ISIL, and terrorism,” Kerry said at the Vienna summit. “It’s hard for some people to grasp it, but what we – you – are doing here right now is of equal importance because it has the ability to literally save life on the planet itself.”

In May of this year, the United Nations went even further, declaring “climate change” to be the greatest global menace facing humanity.

“Climate Change is the single biggest threat to life, security and prosperity on Earth,” said UN Climate Change Executive Secretary Patricia Espinosa at the roll-out of their yearly report.

“This annual report shows how UN Climate Change is doing everything it can to support, encourage and build on the global response to climate change,” Espinosa said, adding that “UN Climate Change’s mandate is to lead and support the global community in this international response, with the Paris Agreement and the Convention being the long-term vehicles for united global climate action.”