Pro-choice Democrats from the Senate Judiciary Committee harassed U.S. District Court nominee Brian C. Buescher for his membership in the Knights of Columbus, a Catholic charitable organization, suggesting that this affiliation might disqualify him for judgeship.

As the Senate Committee reviewed the candidacy of Brian C. Buescher for the District of Nebraska, Senators Mazie Hirono (D-HI) and Kamala Harris (D-CA) asked whether belonging to the Knights of Columbus could prevent Mr. Buescher from hearing cases “fairly and impartially.”

The senators suggested that the Knights’ opposition to abortion and same-sex marriage could cloud the candidate’s vision and impair his judgment. The questions smelled oddly of a religious litmus test, since the positions under examination are held and taught by the Catholic Church itself and are not unique to the Knights of Columbus.

Article VI of the U.S. Constitution prohibits the government from considering a person’s faith when assessing fitness to hold federal office. This clause is part of the original Constitution and has been a bedrock principle since the founding of the Republic.

The Knights of Columbus have taken “a number of extreme positions,” Sen. Hirono stated in written questions sent to Buescher on December 5, such as contributing “to California’s Proposition 8 campaign to ban same-sex marriage.”

For her part, Sen. Harris asked Buescher whether he was aware that the Knights of Columbus “opposed a woman’s right to choose” and were against “marriage equality” when he joined the organization.

“The Knights of Columbus does not have the authority to take personal political positions on behalf of all of its approximately two million members,” Buescher said in his response.

A spokesperson for the Knights of Columbus, Kathleen Blomquist, decried the anti-Catholic bias implicit in the senators’ questions.

“Our country’s sad history of anti-Catholic bigotry contributed to the founding of the Knights of Columbus, and we are proud of the many Catholics who overcame this hurdle to contribute so greatly to our country,” Blomquist told the Catholic News Agency (CNA).

“We were extremely disappointed to see that one’s commitment to Catholic principles through membership in the Knights of Columbus — a charitable organization that adheres to and promotes Catholic teachings — would be viewed as a disqualifier from public service in this day and age,” she said.

Another pro-choice Senator, Cory Booker (D-NJ), underscored Mr. Buescher’s vocal opposition to abortion when he was running for Nebraska attorney general in the Republican primary election.

“Why should a litigant in your courtroom expect to get a fair hearing from an impartial judge in a case involving abortion rights?” Sen. Booker asked.

“As a candidate for Nebraska Attorney General in 2014,” Buescher responded, “I did what candidates for any major state or federal office do, which is to take political positions on a variety of issues of the day.”

In his answer, Buescher noted that there is an important difference between taking political positions as a candidate for office and serving as a federal judge.

“I believe a judge’s role and obligation is to apply the law without regard to any personal beliefs regarding the law,” Buescher wrote.

“If confirmed, I will faithfully apply all United States Supreme Court and Eighth Circuit Court of Appeals precedent on all issues, including Roe v. Wade.”

In his questioning, Sen. Booker failed to acknowledge that every judge has personal opinions regarding moral questions such as abortion and homosexuality, and he seemed to imply that being in favor of these issues is not an obstacle to judicial impartiality, whereas opposition to them is.

The Senators’ faith-based hazing of Mr. Buescher was redolent of the similar shameful treatment dealt out to Amy Coney Barrett a year ago when President Donald Trump nominated her to serve as a judge of the U.S. Court of Appeals for the Seventh Circuit.

During the confirmation process, several Democratic Senators grilled Barrett on her Catholic faith, suggesting that such religious belief was an obstacle to judicial service.

“When you read your speeches, the conclusion one draws is that the dogma lives loudly within you,” Feinstein said. “And that’s of concern when you come to big issues that large numbers of people have fought for for years in this country.” 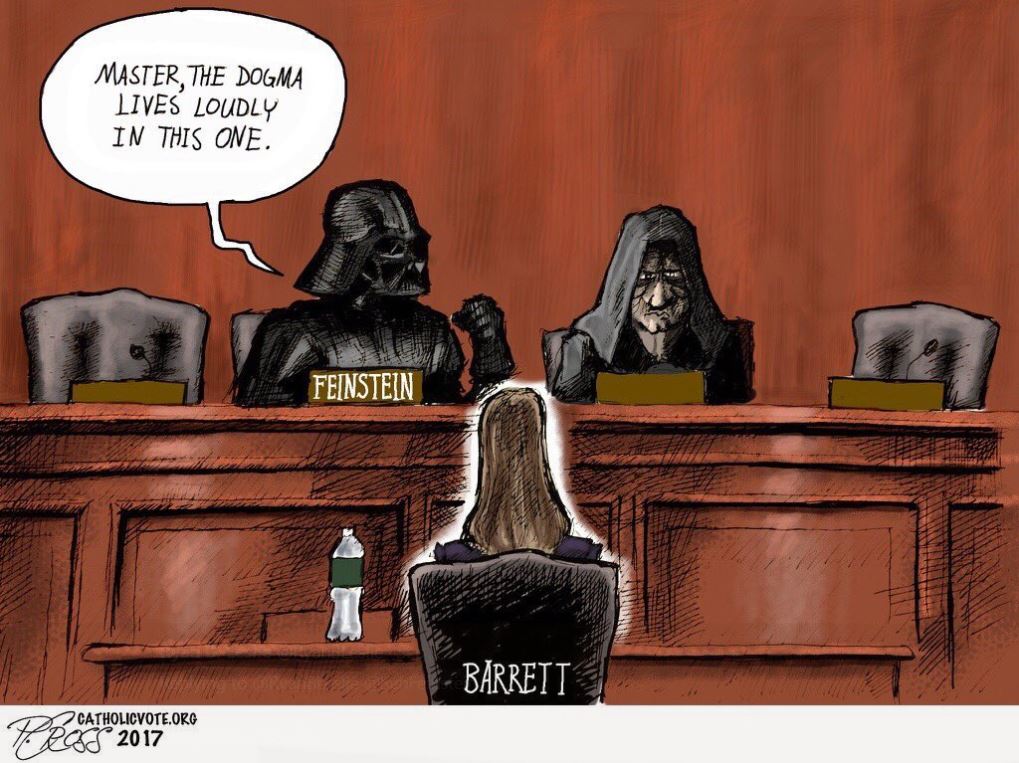 The dogma lives loudly in you.

Shortly after the confirmation hearings, the U.S. Catholic Bishops denounced the line of questioning directed at Barrett in a formal statement.

These questions “harken back to a time in our country when anti-Catholic bigotry did distort our laws and civil order,” the statement read, and are “a reminder that we must remain vigilant against latent bigotries that may still infect our national soul.”

“People of faith—whatever faith they may hold—should not be disqualified because of that faith from serving the public good,” the statement said.

“Rather than hold people of faith in suspicion, our laws and lawmakers should tolerate, if not celebrate, the role faith has in society and in the lives of individuals. To do otherwise is contrary to the ideals of a healthy, pluralistic society,” it said.