Arriaga has been arrested for allegedly shooting and killing Singh — a legal immigrant from Fiji — during a routine traffic stop the day after Christmas.

Over his police radio, Singh called out “shots fired,” and as police arrived at the scene of the traffic stop, they found the officer with a gunshot wound. Singh was transported to a nearby hospital where he later died.

Stanislaus County Sheriff Adam Christianson says California’s “sanctuary state” law “provided sanctuary” for the accused killer, Perez Arriaga. Police said Perez Arriaga was a “known” gang member who planned to flee across the U.S.-Mexico border after the killing. The illegal alien allegedly crossed into the U.S. through Arizona a couple of years ago.

During a candlelight vigil, thousands from the small California community gathered together to remember Singh.

“I was blessed to know Officer Singh. He was an unbelievable person. Always happy. Always smiling,” a city councilman said of Singh. “Always joyful, joking around. Doing a job he absolutely loved, serving our community. He had such a big heart.” 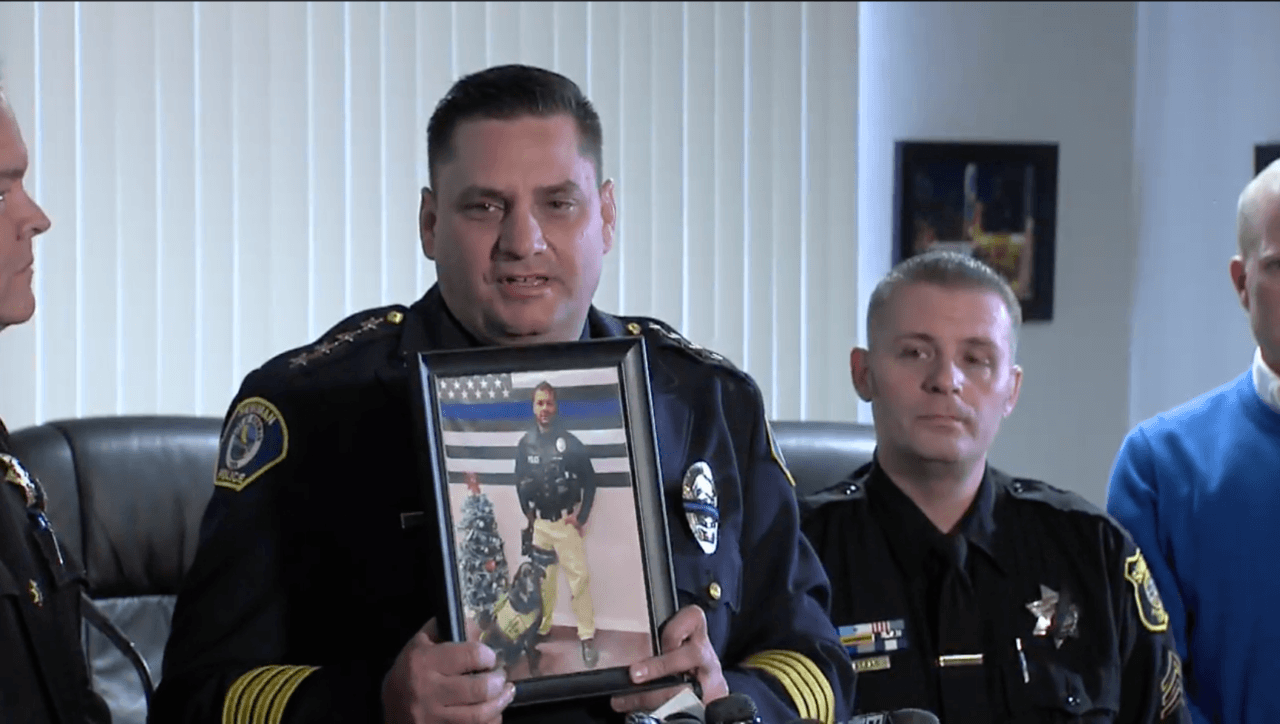 Newman Police Chief Randy Richardson holds a photo of Ronil Singh, 33-years-old, as he stood in front of a law enforcement flag and next to a Christmas tree just a day before being killed allegedly by an illegal alien. (Screenshot via SCSD)

Tracey Taylor, a Newman resident, said she got to know Singh after he was the responding officer following her daughter’s suicide four months ago.

“I don’t think if it were for him we would have gotten through that time. And my husband is just devastated,” Taylor said.

“Everything that your husband did for us, and I know how hard it was for him to get through … I’m very sorry, I understand how you feel,” Taylor told Singh’s wife and family.

Newman Police Chief Randy Richardson said Singh was a patriotic man who loved America and the community he protected.

Singh’s friend of 15 years called the beloved officer a “hero” who “was amazing.”

“He was a good guy, he was a good friend. He loved my kids, he introduced me to Fiji food. It was delicious,” the longtime friend said. “I remember his mom would always make me Fiji tortillas and that was amazing. Singh was a good man. I respect him highly. He has a beautiful wife, son, family and he was always happy. When you were sad, he would make you happy. Always smiling.”

“He was a good man. Don’t ever forget him,” the friend continued. “A month down the road, don’t ever forget Singh. Two months, a year, don’t forget he fought the fight. He went down as a hero. And I love him.”

“I had a snake in my garage. So Officer Singh … came to my home,” the councilman said.

“The first thing Officer Singh said was ‘I’m not a snake catcher.’ And he laughed at me but he said we’re going to get this snake out of your garage,” he said as the crowd laughed.

“He got the snake, put it in a box and … every time Singh would see me, he would do this number,” the councilman said as he made a snake gesture with his hand, imitating Singh.

“The family, I’m sorry for your loss,” he continued. “But Newman is sorry for the loss. We will miss him. God bless you guys.”

A day before the killing, Singh had spent Christmas with his wife and newborn baby boy. Singh leaves behind his wife, Anamika, and their five-month-old son. The Stanislaus County Sheriff Department has set up a memorial fund for the Singh family for people to donate here.