The hashtag #IStandwithPresTrump trended nationally after President Trump’s rally in North Carolina on Wednesday evening, a show of support from his online supporters.

The hashtags in support of Trump came after #IStandwithIlhan trended nationally, after attendees at the rally chanted, “Send her back.” Twitter did not show how many tweeted the #IStandwithIlhan hashtag: 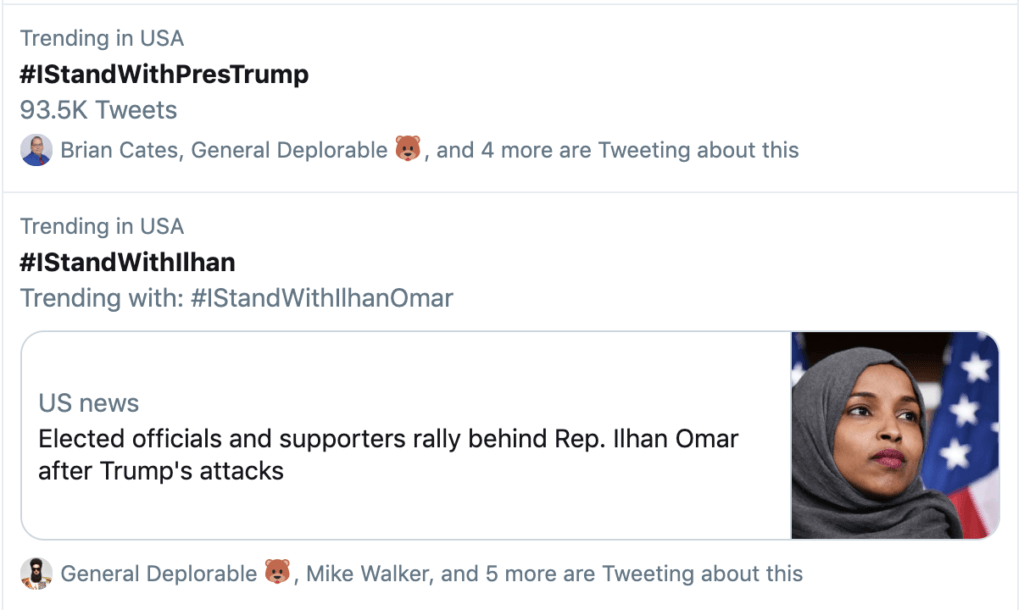 Stand with Trump and Stand with Ilhan trending on Twitter

Trump ripped Omar for remarks she has made criticizing U.S. troops involved in Black Hawk Down in Somalia, appearing to minimize the terrorist attacks on 9/11 with her comment that “somebody did something” and for remarks that were widely perceived as antisemitic.

“I think in some cases, they hate our country,” Trump said. “And they’re so angry!”

He continued his attacks against the four, saying, “Let them leave. … If they don’t love it, tell them to leave it.”

Trump ignited a political firestorm after he tweeted on Sunday that members of the “Squad” should “go back” to their countries of origin.

On Monday, Democrats — who had been infighting all weekend after Ocasio-Cortez suggested Pelosi is racist — passed a resolution condemning his tweets.

Trump denied he had one “racist bone” in his body, and many Republicans came to his defense.

Recent polls showed that Trump’s approval ratings among Republicans have gone up since his tweets and that members of the squad are unpopular among the American electorate.

Another YouTube poll showed that of the members of the “Squad,” only Pressley had a net favorability rating; the rest were viewed unfavorably overall by the general population.