Two illegal aliens living in Texas have been charged with abusing a six-year-old boy after he was found tied up and living in an outdoor shed by Dallas police officers.

Mexican illegal aliens Esmeralda Lira, 53-years-old, and Jose Balderas, 66-years-old, were arrested by Dallas police officers and charged with felony abandonment and endangering a child this week when Lira’s six-year-old grandson was discovered tied up and living in an outdoor shed filled with rats and insects.

Arrest affidavits obtained by CBS DFW reveal that Lira had allegedly forced the boy to live in the shed for at least two weeks during the coronavirus crisis. The boy told police Lira’s abuse began after he “got out of school for the corona thing” and Balderas allegedly said he was fully aware of the abuse. 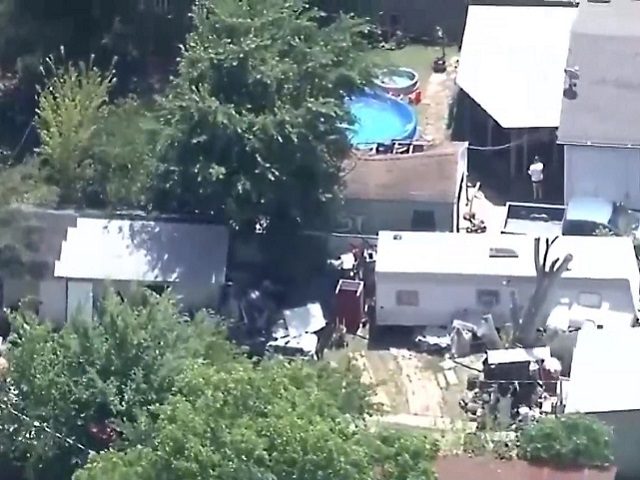 An aerial view of the outdoor shed where a 6-year-old boy had allegedly been kept by two illegal aliens. (Photo via CBSDFW)

The boy told police that when Lira left the residence, she would tie him up, tell him he had been bad, and put him in the outdoor shed. The boy also said he was never allowed indoors, being locked up at night and released in the morning.

Lira, the boy said, would give him a plastic bag to relieve himself in and allegedly only bathed him by spraying him with a hose. The boy told police Lira would kick him and grab him by the ears.

In a statement to Breitbart News, an Immigration and Customs Enforcement (ICE) official confirmed that Lira and Balderas are both illegal aliens from Mexico.

The ICE spokesperson said they have placed a detainer on Lira and Balderas so that if they are released on their $100,000 bails, they will be turned over to ICE agents for arrest and deportation.