President Donald Trump and First Lady Melania Trump knelt in prayer behind the scenes during their visit to the Saint John Paul II National Shrine in Washington, DC, on Tuesday.

A behind-the-scenes photo posted on Melania Trump’s Instagram showed the Trumps kneeling in prayer inside the shrine.

@POTUS & I honored the life & legacy of Saint John Paul II at @JP2Shrine today. His passion & dedication for religious freedom is a legacy that we must protect for people around the world.

The media were not permitted to join the Trumps for their tour inside the shrine but did photograph them in front of the statue of St. John Paul II outside. 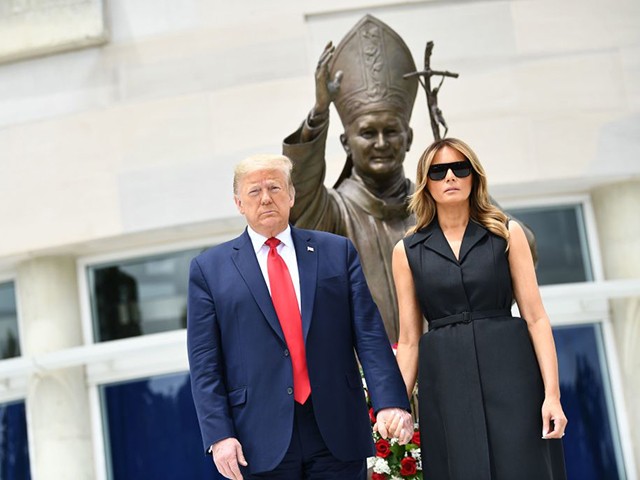 US President Donald Trump and First Lady Melania Trump visit the Saint John Paul II National Shrine, to lay a ceremonial wreath and observe a moment of remembrance under the Statue of Saint John Paul II on June 2, 2020 in Washington, DC. (Photo by BRENDAN SMIALOWSKI/AFP via Getty Images)

The president and the first lady visited the shrine on Tuesday morning, honoring the famous pope who helped topple the communist ideology in Poland.

Today is June 2, the same date that John Paul II visited his native country of Poland as the first pope to visit a communist-ruled country in 1979.