Montgomery County, Maryland officials are continuing to free illegal aliens accused of crimes into the United States despite claims to have ended their sanctuary county policy last year.

In November 2019, Mongomery County Executive Marc Elrich (D) claimed to have reversed the region’s sanctuary policy following public outcry after a string of illegal aliens were accused of sex crimes, including crimes against children.

An investigation by the Immigration Reform Law Institute (IRLI) reveals that Montgomery County officials, though claiming to be cooperating with Immigration and Customs Enforcement (ICE) agents, are skirting the process to ensure accused criminal illegal aliens are freed into the U.S.

The investigation shows that Montgomery County officials often give ICE little-to-no heads up to take an illegal alien into custody before they are released from jail.

In one case noted by IRLI investigators, Montgomery County officials gave ICE agents just 28 minutes heads up to pick up an illegal alien accused of second-degree rape and sexual abuse. Subsequently, that illegal alien was freed into the U.S. as ICE agents were unable to properly schedule a transfer of custody in such short notice.

“So under the regulation, ICE asks for 48 hours … we found in our investigation that they’re giving ICE less than half an hour sometimes to come and pick up rapists,” Wilcox said. “It’s just incredible that this jurisdiction is thumbing their nose at the public again, pulling the wool over peoples’ eyes saying ‘We’re not a sanctuary jurisdiction any longer, we’re complying, we’re notifying ICE’ but they’re not giving ICE enough notice to get there and apprehend these individuals.”

In at least eight of those cases, the illegal aliens were freed into the U.S. because ICE agents were given less than four hours’ notice. A Montgomery County spokesperson told IRLI investigators that ICE detainers are only honored when an illegal alien is charged or convicted of “serious crimes,” though they did not explain what constitutes such a crime.

One of the sanctuary county’s most high-profile cases occurred in December 2017 when 28-year-old illegal alien Roberto Garza Palacios of Guatemala caused a crash that killed 33-year-old Sander Cohen and 36-year-old Carlos Wolff. 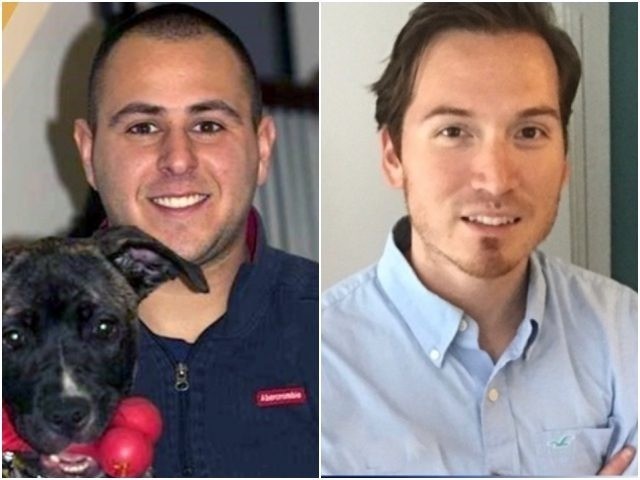 Sander Cohen and Carlos Wolff were killed in a crash in December 2017 that was caused by an illegal alien who had been previously been freed from police custody by Montgomery County, Maryland officials. (Photos via WBALTV)

In 2015, Garza Palacios pleaded guilty to drunk driving and was arrested and convicted that same year for breaking the windows of 16 vehicles and starting a fire. Garza Palacios served four months in prison and was eventually released back into the public despite ICE’s request that he be turned over to them for arrest and deportation.

Ultimately, Garza Palacios was bailed out by CASA de Maryland — an open borders legal firm. The group also paid for Garza Palacios’ legal fees. The illegal alien received only a $280 fine for the deaths of Cohen and Wolff.