President Donald Trump and his deputies have grown the economy and wages while also reducing immigration, contradicting loud warnings from the political and business establishment, according to an October 22 report by the Center for Immigration Studies (CIS).

The report’s data about arrivals and departures shows that “the economy continued to expand and the situation for the working class improved at a time of reduced immigration,” said Steve Camarota, research director at CIS.

“The argument that lots of immigration is necessary to raise prosperity — [as measured by] wages and labor force participation — is wrong,” Camerota told Breitbart News.

The slowdown in growth is entirely due to a decline in non-citizens in the country; the number of naturalized citizens continues to grow. This is probably an indication that some illegal immigrants left or fewer arrived, primarily from Mexico. It may also indicate that more long-term visitors are headed home instead of overstaying their visas.

A second October 22 report showed the rise in departures: “Our analysis of the public-use data indicates that the falloff in net migration was caused by a substantial increase in out-migration in the first part of the Trump administration, as well as a more modest reduction in new arrivals.” 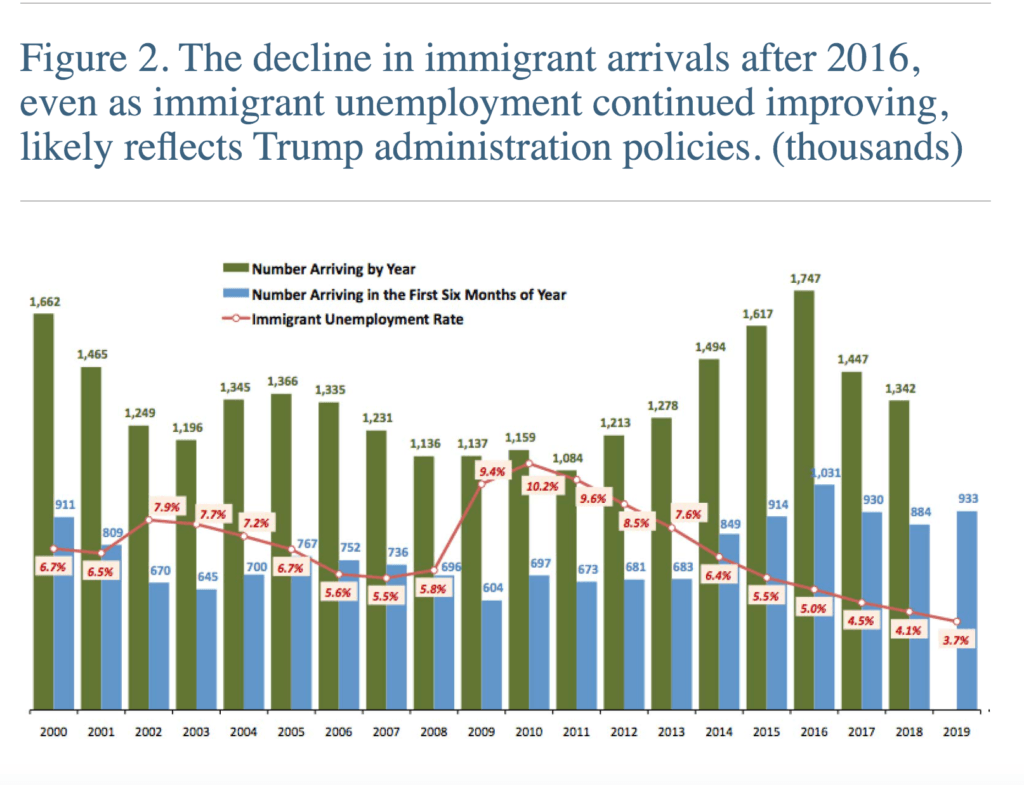 The Trump slowdown was likely the result of many small-scale actions by the administration, not by a poor economy, Camarota said. “The slowdown in growth and net migration almost certainly reflects policy changes rather than a deterioration in the economy, as unemployment was low and job creation reasonably strong from 2017 to 2019. Covid-19 did not have an impact until 2020,” according to his report.

The slowdown has not fully stopped or reversed the population growth from immigration, the report notes:

As a share of the U.S. population, immigrants (legal and illegal) comprised 13.7 percent in 2019, the highest percentage in 109 years.

In addition to immigrants, there were 17.1 million U.S.-born minor children with an immigrant parent in 2019, for a total of 62 million immigrants and their children in the country — accounting for about one in five U.S. residents.

The CIS study focused on the rising wages for Americans and on the share of working-age Americans who have jobs during a period of declining immigration.

But many business groups value immigrants because they earn more wealth — measured in stock values and other investments — as the government expands the economy by importing more consumers, more homebuyers, more renters, and more cheap workers to fill more jobs in more companies.

However, that resulting gain for investors is often mixed with losses as Americans are pushed out of the workforce, earn less, and pay higher rents amid a bigger workforce and more competitive housing market.

“There’s a big difference between a big GDP [nationanal gross domestic product] and being in a richer country,” Camarota said. “Bangladesh has a large GDP than Ireland. Do people say, ‘Clearly Bangladesh is much richer than Ireland?’ No, so obviously what matters [to ordinary people] is per capita wealth, and having a bigger economy may or may not improve per-capita income or wages or per-capita GDP.”

Open-ended legal migration is praised by business and progressives partly because the arrival of migrants helps to transfer wealth from wage-earners to stockholders.

Migration moves money from employees to employers, from families to investors, from young to old, from homebuyers to real estate investors, and from the central states to the coastal states.

Trump has boosted support among younger blacks and Latinos, especially men.
But surely it can't have anything to do with voters' rational response to Trump's (supposedly racist) immigration-curbing, wage-boosting policies?https://t.co/dZ9rGaJF5z