“He is a legend. He really is. There aren’t really too many legends around,” Trump said. “To those people that listened to him every day, it was like a religious experience for a lot of people. His fans. They just wouldn’t miss him. A very, very, unique person.”

The former president spoke about Limbaugh’s life and legacy in a phone interview on Fox News Wednesday afternoon.

“He was fighting till the very end, he was a fighter and just a great gentleman,” Trump said.

The former president said that he spoke on the phone with Limbaugh just a few days before he died.

“His fight was very, very courageous and he was very, very, sick and from diagnosis on, it was just something that was not going to be beaten,” he said, recalling when Limbaugh was diagnosed with terminal lung cancer in February 2020.

Trump noted that Limbaugh fought hard to live past the election, telling Fox News that the broadcaster believed that he actually won the 2020 election.

“Rush thought we won. So do I, by the way,” Trump said, adding that even though the Republican party had some of the best people, “We don’t have the same support at certain levels of the Republican system.”

Trump also recognized Limbaugh’s patriotism and the strength of his show.

“He was very open. I think that’s why his show did so well. he was very open to his listeners, to his fans, of which there were record numbers,” he continued.

Trump commented on Limbaugh’s talent on the radio for his “massive” audience.

“He was a very unique guy and had tremendous insight, he really got it, he was very street smart,” Trump said.

The former president admitted that he did not know Limbaugh until after he announced his run for president in 2015 and received positive reviews of his speech.

Trump spoke on occasion with Rush Limbaugh during his 2016 presidential campaign. After he was elected president, Trump golfed and lunched with Limbaugh and even invited the legendary broadcaster to speak at some of his famous political rallies. During the 2020 election, Trump appeared on Limbaugh’s show for what was dubbed “the largest radio rally in history.”

The former president also released a statement on Limbaugh’s death. 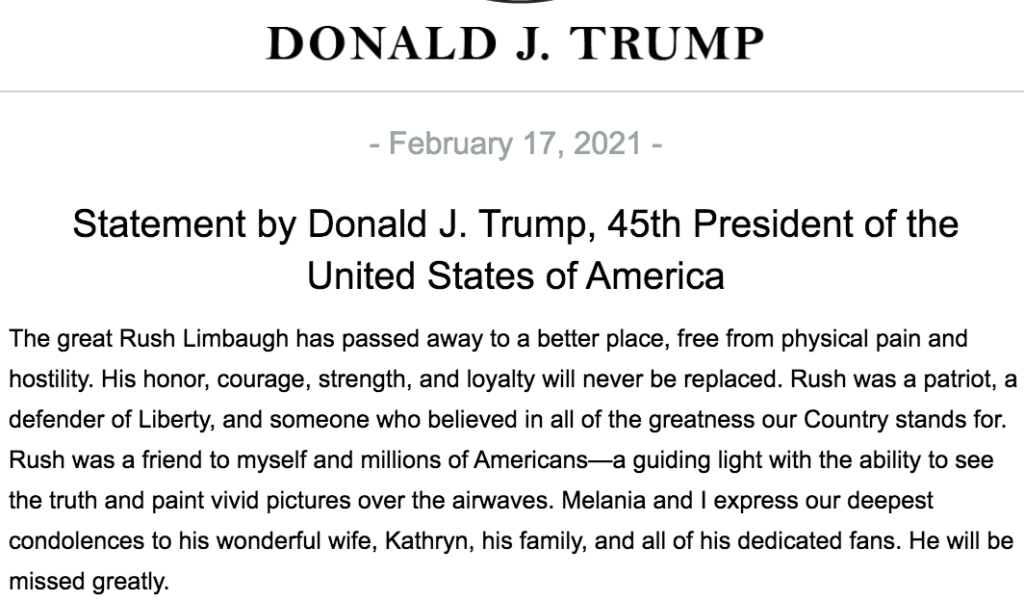