In May, President Joe Biden announced he would raise the refugee resettlement cap to 62,500 refugees for Fiscal Year 2021 — more than four times the cap that former President Trump imposed for the year at about 15,000 refugees.

The Fiscal Year started on October 1, 2020, and ran through September 30. The annual cap set by presidents is merely a numerical limit and not intended to be a numerical goal.

In January, Biden signed an executive order that ended Trump’s constitutional travel ban which had prevented almost all immigration to the U.S. from particular countries with a history of exporting terrorism.

As a result, more than 3,000 refugees from countries listed on Trump’s travel ban were resettled across the U.S. this past Fiscal Year, including:

Thanks to Trump’s reduction in the refugee resettlement program, a little more than 11,400 refugees in total were resettled in Fiscal Year 2021 — a huge cut to Obama era levels and far below Biden’s cap of 62,500.

The total, though, is still a significant population that is larger than Montpelier, Vermont’s population which is fewer than 7,500 residents. About 48 percent of refugees admitted this past Fiscal Year went to battleground states, including:

A bulk of refugees, nearly 3,000, were resettled in California, Kentucky, New York, and Washington.

As Breitbart News reported, Biden is planning to bring more than 10 times as many refugees to the U.S. for Fiscal Year 2022 — which started on October 1 — as he brought in Fiscal Year 2021. 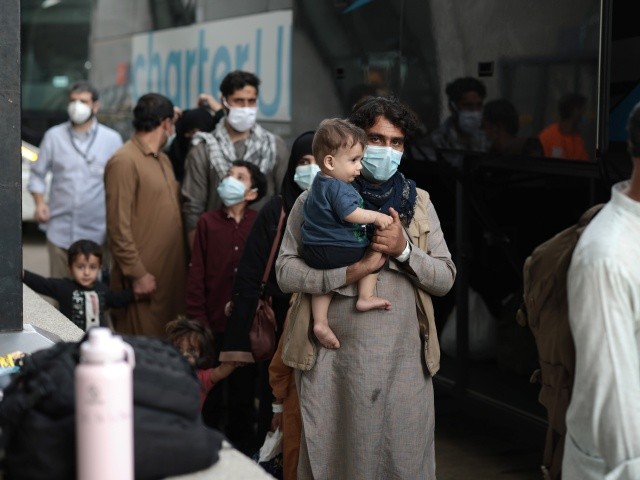 Refugees board a bus at Dulles International Airport that will take them to a refugee processing center after being evacuated from Kabul following the Taliban takeover of Afghanistan on August 31, 2021, in Dulles, Virginia. (Anna Moneymaker/Getty Images)