DeSantis made the announcement during a press conference in Jacksonville, Florida, noting the country is “dealing with the fallout from the reckless border policies of the Biden administration” and that the Sunshine State sent support to Texas five months ago because of the crisis on the Southern border.

Roughly 200,000 people illegally enter the country every month, DeSantis said, explaining that many of the people who poured in “said their ultimate destination was the state of Florida.”

“It obviously was affecting us. We could tell off the bat. But what would happen was they would identify, they would have someone coming in illegally, turn them over to the Feds, and then the Feds would just put them on an airplane somewhere, put them on a bus” in different areas of the country, he explained, noting this happened in Jacksonville, Florida, as the Biden administration shipped illegal immigrants in the “wee hours of the morning” with no advance notice to the state. He added that this ended tragically, as a 24-year-old posed as a minor and ultimately committed a murder.

“If the border had been secure and the policies weren’t so reckless, that would not have happened. And we see this time and time again,” he said, adding that the cartels are “just eating our lunch.” Florida filed suit against Biden several months ago challenging the catch and release policies, and while he said the case is still pending, he said they are seeing “movement.” However, he said more must be done. Because of that, Florida is proposing a series of legislative reforms to fight against the Biden border crisis.

One of the priorities is to “say to any of these contractors who are involved in ferreting people — whether it’s buses, charter planes, what have you — any of those folks who are involved in facilitating this type of illegal migration in the state of Florida, they’re going to be barred from doing any business with any state or local government agency in the state of Florida,” he said.

“We just cannot be doing contracts with companies that are knowingly and recklessly facilitating bringing people here into our state illegally. I think that will be very, very important,” he announced.

“I’m also going to require that any private entity that’s involved in facilitating illegal migration into Florida owes the state restitution for each person they are facilitating. Whether they’re bringing, whether they’re harboring,” he said, explaining it costs taxpayers in a variety of ways, from criminal cases to drugs to health care.

“Every single person will be charged. The entities will have to provide restitution for the state of Florida,” he announced, stating they will also strengthen the Sanctuary Cities law. 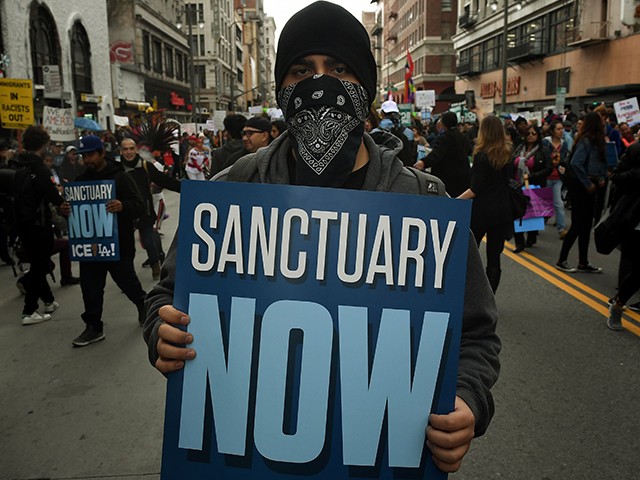 “We’re going to make sure that the local jurisdiction is not assisting state law enforcement in our investigation on whether somebody has been brought here illegally, that that constitutes a sanctuary policy,” he said, noting they are also seeking to strengthen E-Verify enforcement as well.

Illegal minors are coming into the state, and DeSantis said the problem is it is much more lucrative to take foreigners than to take children in Florida. As an example, DeSantis said they get $158 for a foster child, but $500-$1,400 if someone is here illegally.

“And we want to make sure licenses go to facilities who are helping kids in Florida,” he added, pointing out that the “robust” proposals will be discussed in the legislature.

Ultimately, DeSantis said, they have a responsibility to stand up to an administration that has “just decided that they don’t want to have a secure border.”

“You don’t get to make that decision,” he added.