If things are allowed to continue, within a decade or so, every sports record held by a woman will fall to a biological male.

Now that a biological male named Lia Thomas has been allowed to compete against girls and erase and smash all their records, what’s stopping other men from switching genders to achieve fame and Olympic Gold?

What stops men from flooding the zone as female wrestlers, basketball players, and soccer players? What’s preventing men from dominating track and field, tennis, water polo, boxing, and you name it…?

As things stand right now, there is nothing to stop them, but there are all kinds of incentives.

If anything, this Lia guy, who was mediocre when competing against other men, will show the way to easily get your shot at the Olympics.

At least nine transgender individuals — seven biological men and two biological women — hope to compete at the Olympics in July in Tokyo. https://t.co/DBNAuvmUWV

Hey, all you gotta’ do is say you’re a girl.

This is an amazing game of chicken we’re witnessing, one where I sit back and watch in awe at how far it’s already been allowed to go.

I ask you: what has to happen before we finally admit men are different than women and that allowing men to compete against women is not only grossly unfair and anti-science but a despicable act of erasing legitimate female achievements?

Do we finally put a stop to it after a man says he’s a woman and joins the women’s boxing team?

The problem for the practitioners of transsexual voodoo is this… Once you deny a man the right to identify as a woman in one sport — like, say, boxing — the jig is up. The entire transsexual exercise is exposed as a fraud. After all, if a man has an unfair advantage in the boxing ring, why not the swimming pool or the soccer field, or the basketball court? 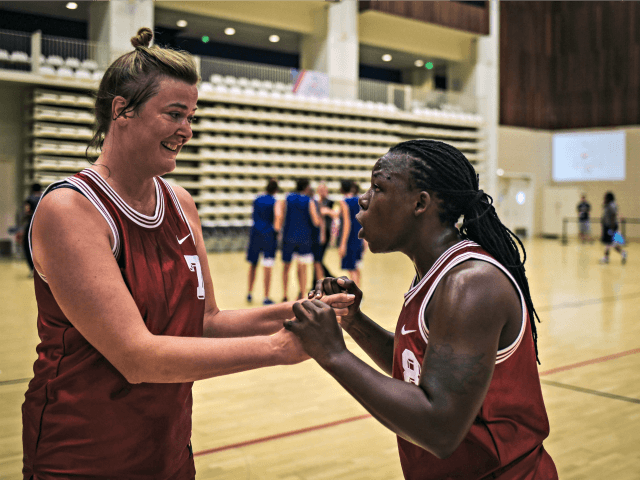 And that’s why this is a game of chicken. This trans madness continues to sprint towards an inevitable disaster. Unless someone swerves, there is no good outcome possible. Eventually, an actual female will get hurt or killed in a wrestling match. Eventually, girls will walk away from sports because there’s just no point. Eventually, these male cheaters will erase every legitimate achievement made by a woman athlete. Eventually, every “female” Olympic athlete will be a guy.

That is the only way this ends.

Are women going to allow this to happen?

Women overwhelmingly vote for Democrats, and it is only leftists who allow this obscenity to continue… So, yes, it is up to women to put a stop to it.

If women stand up for themselves, they can save women’s sports.

Standing up to the Woke Gestapo not only requires moral courage, it means joining a left-wing team women hate more than anything, and that’s our team on the pro-science right. And if it’s a choice between being blacklisted and ostracized like J.K. Rowling or watching decades of female achievement flushed down the toilet at the hands of anti-science progressivism, they will always choose the tribe.

But keep the following in mind, ladies… at the height of her legendary powers, Venus Williams would have lost to a man ranked 200 in men’s tennis.