In this “pathbreaking” partnership, AFT announced that “tens of millions of kids … and their families” can receive the service’s browser extension for free to put a “traffic light” on certain sources deemed by NewsGuard to be “misinformation.”

Recently, MRC conducted a study on NewsGuard’s tool, finding “extraordinary left-wing bias” in its rating system. In the study, MRC found the average rating for left and left-leaning sites — like the Nation or the openly socialist Jacobin — was 93 percent, whereas the average rating for right-leaning sites — including Fox News, the Washington Times, and Breitbart News was 66 percent.

NewsGuard’s average 27-point disparity means it considers left-wing outlets to have substantially more “credibility” than conservative ones. But the AFT’s plan to proliferate the tool among its 1.7 million teacher-members, as well as their students and their students’ families to be used “whenever they search the web for news or information,” appears to be an attempt at sneaking an in-home censorship service onto the computers of millions of Americans.

The browser extension would display in the search bar a green checkmark for “credible” sites, a red exclamation point for sites that “fail to meet the basic standards of credibility,” a yellow smiley face for satire, or a gray “i” for platforms.

“For years, educators have fought battles against suspect sourcing, with their students often misled by dubious outlets and spam sites posing as ‘news,'” the AFT press release states. “AFT President Randi Weingarten hailed the deal as a game-changer for teachers and families drowning in an ocean of online dishonesty.”

Weingarten, who is also a powerful player behind keeping schools closed and keeping harmful virtual learning the norm, said of NewsGuard that “it is a beacon of clarity to expose the dark depths of the internet and uplift those outlets committed to truth and honesty rather than falsehoods and fabrications.”

NewsGuard’s “beacon of clarity,” however, gives extremely favorable ratings to socialist propaganda sites and those that advocate political violence.

MRC found that NewsGuard’s rating of the Nation was 92.5 percent. A site that boasts an article titled, “In Defense of Destroying Property,” students using the tool can now find reliable information justifying the violent riots across America over the summer of 2020.

“Given that capitalism largely restricts pleasure to the consumption of goods, we should be able to entertain the idea that this taking of unnecessary things—while not a recognizably political act—is understandable or even a justifiable,” the article reads. “The image of the ‘mom and pop’ shop conflates property and people—effectively presenting the destruction of property as a direct attack on an individual,” it says, seemingly overlooking the destruction of small business owners’ livelihoods.

“The notion that nonviolence is tactically more effective—that it elicits sympathy, whereas property destruction leads to acrimony and waning popular support—has not only been proven wrong over the past week by sheer numbers,” it continues. “It cannot be historically supported. For the police and overtly racist portions of the US population, the difference between nonviolent and (ostensibly) violent protest is of no consequence.” [Emphasis added].

But even as the author outrightly promotes socialism, it is offensive to the Jacobin writer as it goes too far in criticizing Karl Marx: “The accusations include claims that Marx had ‘authoritarian tendencies.’ Where? When? Robinson doesn’t say. Marxists have ‘had too little regard for the importance of individual liberty.’ This is certainly true for Stalinism, but it’s hardly a fair picture of the rich democratic-socialist tradition inspired by Marx.” [Emphasis added].

The Jacobin writer apparently forgets about one of Marx’s seminal requirements for achieving his utopia: the “dictatorship of the proletariat.”

On the other side, however, MRC found that the Federalist had the worst score among media outlets, clocking in at 12.5 percent using NewsGuard’s tool. NewsGuard cited the fact that the Federalist questioned the efficacy of cloth masks in combatting the coronavirus. Even if that was the case, however, CNBC — which has a 95 percent NewsGuard rating — ran a story saying cloth masks were only 37 percent effective.

Another apparently reliable news source — clocking in at a NewsGuard 87.5 percent rating — is Mother Jones, one of a number of outlets that even Axios condemned as having committed “one of the most egregious journalistic errors in modern history,” over its false reporting on the discredited Steele dossier that led to Donald Trump-Russia collusion lie in 2016. Mother Jones was also one of the outlets the FBI used to corroborate the Steele dossier.

When asked if he would correct the record, Mother Jones Washington Bureau Chief David Corn said, “My priority has been to deal with the much larger topic of Russia’s undisputed attack and Trump’s undisputed collaboration with Moscow’s cover-up.” 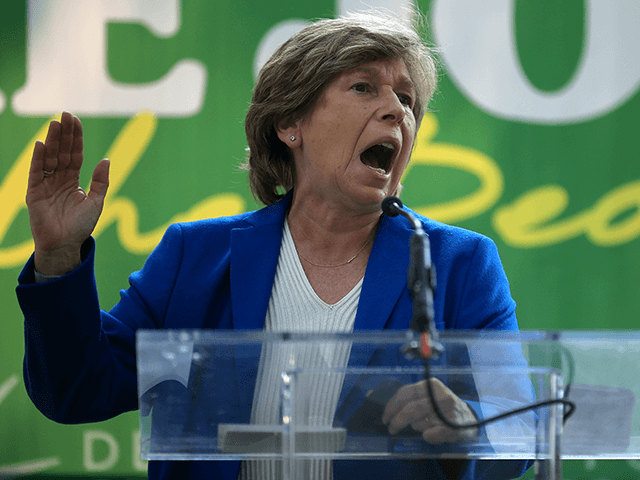 American Federation of Teachers president Randi Weingarten addresses a ‘Let’s Finish the Job for the People’ rally near the U.S. Capitol on September 14, 2021, in Washington, DC. (Photo by Chip Somodevilla/Getty Images)

Ironically, one of NewsGuard’s criteria for rating news outlets is if it “regularly corrects or clarifies errors.” Despite that, the NewsGuard tool gave Mother Jones a green checkmark on this criterion, according to the MRC study.

Similarly, BuzzFeed, which according to Axios maintains the Steele dossier online, scored a perfect 100 percent score from NewsGuard’s tool. Other leftist news outlets that have a 100 percent rating are the Atlantic, the New York Times, the Washington Post, NBC News, Politico, the New Yorker, and TIME magazine.

As MRC points out, HuffPost, which released the article, “Rush Limbaugh, Bigoted King of Talk Radio, Dies at 70,” scored 87.5 percent.

But regardless of the intense bias of NewsGuard, Weingarten believes “this historic deal will not only help us steer clear of increasingly fetid waters—it will provide a valuable lesson in media literacy and a discussion point for teachers in class on what can, and can’t, be trusted.”

“Sadly, the foundational role of the fourth estate is in danger of being poisoned by torrents of trash,” she continued. “NewsGuard reminds us of the importance of an independent press that students can rely on to form their own views and opinions so they can participate as active citizens in our democracy.”

MRC President Brent Bozell, however, believes this is another way the teachers’ unions are attempting to indoctrinate children, saying, “The left has found a dangerous and equally disingenuous new way to indoctrinate our children, without their parents knowing.”

“NewsGuard is partnering with a national teacher’s union to bring their biased ratings into classrooms nationwide,” he continued. “This is as bad as CRT. In fact, it’s worse. Like CRT, it is designed to push a leftist ideology on children, but unlike CRT, the left is not going to give it a name this time. This is purposely designed to go under the radar of public scrutiny.”