Kemp was winning by 3.3 percent of the vote with 46 percent of precincts reporting at the time of this writing, according to the secretary of state’s results. Decision Desk HQ called the race at 9:30 p.m., a couple hours after polls closed.

Kemp’s reelection victory comes after the governor narrowly defeated Abrams in 2018 by a slim margin of less than two percent of the vote.

This year’s expensive rematch between the two candidates became a heated battle in which Kemp sought to frame Abrams as an out-of-touch elite, while Abrams used a smorgasbord of issues, from abortion to health care to gun laws, to attack Kemp despite no one issue seeming to stick. 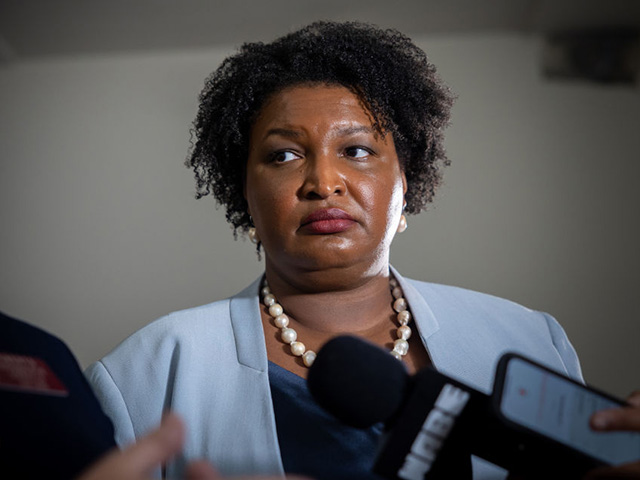 Kemp’s win this time around appears to be more decisive than the first, signaling Georgians have been pleased with Kemp’s “record,” a term the governor reiterated frequently on the trail as he campaigned heavily on his accomplishments.

Kemp’s first gubernatorial term was defined by the governor passing significant pieces of conservative legislation, being one of the first to reopen their state amid coronavirus case surges, becoming a top target of former President Donald Trump because of Trump’s gripes with the state’s 2020 election process, and fending off a second challenge from Abrams.

Under Kemp’s watch, Georgia passed the nation’s first sweeping election integrity bill following the 2020 election. Republicans generally applauded the bill, while Democrats, including Abrams, condemned it as suppressive for racial minorities, despite minority voting blocs going on to turn out in record numbers following the bill’s passage.

Kemp in 2019 signed into law a “heartbeat” bill, which banned most abortions after six weeks. While the bill faced legal hurdles almost immediately, those disappeared after the Supreme Court overturned Roe v. Wade in June. The bill went into effect soon thereafter.

Abrams, who infamously refused to concede after her first loss to Kemp, aggressively pursued loosening voting restrictions in the aftermath of her defeat.

She transformed into a Democrat darling in the 2020 election cycle, during which her historically red state stunningly elected a Democrat president and two Democrat senators in photo finishes.

Left-leaning media outlets, such as Newsweek and Marie Claire, proceeded to give Abrams magazine cover treatment, crediting the 2020 Democrat victories to her get-out-the-vote efforts.

Abrams’ brand has included frequently sounding the alarm on perceived threats to democracy while repeatedly undermining her own election results from 2018.

The Republican National Committee compiled a minute-and-a-half supercut of Abrams using terms over the past four years such as “stolen” and “rigged” to describe her 2018 loss.

Last night, Stacey Abrams claimed she “never denied the outcome” of her 2018 loss.

But Abrams repeatedly said she “won” and the race was “stolen.”

While her claims have gone largely unchecked by Democrats and mainstream media, who often deride Republicans who questioned the 2020 election as “election deniers,” a Washington Post fact check in September bucked precedent and explored “Stacey Abrams’ rhetorical twist on being an election denier.”

In addition to the magazine covers, Abrams’ campaign raked in gobs of money from out of state. Hollywood celebrities like Oprah swooped in to show their support for Abrams. The Georgia Democrat herself dabbled in Hollywood when she made a cameo appearance this year in Star Trek: Discovery. Republican operatives have often pointed to her gubernatorial pursuit as a mere stepping stone to greater aspirations, that is, a presidential bid.

Abrams also endured Republican wrath on a national scale in February when a viral photo emerged of her posing maskless in front of dozens of masked children amid growing frustration, mainly from Republicans, about continual mandates.

Abrams’ prominence led Kemp to nickname Abrams “celebrity Stacey” and contend that she was out-of-step with average Georgians.

Stacey Abrams would be a great governor for the liberal elites in New York and California who are funding her campaign.

The battleground gubernatorial race also became one of the most costly races in the country.

Between the candidates’ own campaigns and the leadership committees candidates are granted by state law, Abrams raised about $97 million and Kemp took in about $70 million, according to the most updated state records. Abrams ended with $6 million on hand, while Kemp ended with $10 million on hand.

Despite Abrams outraising and outspending Kemp, the governor led by several points in polls from the outset of the general election.

At least 3.9 million ballots were cast in Georgia’s midterms, which is more than half of the state’s total active electorate, according to the secretary of state’s office.