Mark Morgan, former chief operating officer and acting commissioner for Customs and Border Protection (CBP), told Breitbart News on Wednesday that the Biden administration and Democrats intend to include a “mass amnesty proposal” for illegal aliens in an appropriation bill marketed by the White House as a “Bipartisan Infrastructure Bill.”

“The White House and Democrats are trying to pass through a mass amnesty proposal as part of infrastructure,” Morgan warned on Wednesday’s edition of SiriusXM’s Breitbart News Daily with host Alex Marlow. “That in and of itself is ridiculous, but they’re also doing it through a complicated, seldom-used reconciliation process. It’s an end-run around needing a 60-vote requirement to get a bill passed [in the Senate].”

He continued, “This is unconscionable. I believe it’s illegal. I believe it goes against the reconciliation requirements, that [the legislation must] have some tangential relationship to spending. That’s the only way it can be part of an appropriations bill, [in this case] specifically infrastructure. It’s absolute lunacy.”

Americans “should have their voices heard” on an issue “so critical to our national security, public health. and our public safety,” Morgan remarked.

“The White House and Democrats [are] trying to do a back door, midnight, cloak of darkness deal to further their agenda,” he added. “It’s unconscionable.”

CBP cannot adequately secure the border while its resources are consumed by processing and housing illegal aliens, Morgan stated.

“Border patrol agents [are processing] 210,000 illegal aliens [in July],” he noted. “Guess what’s happening? They’re being pulled off the line. Large areas of the border are wide open. It’s why you’re seeing fentanyl [trafficking] skyrocket, criminal aliens are getting past them, gang members are getting past.”

Morgan said approximately 300,000 migrants — which he described as a “conservative” estimate — evaded Border Patrol agents in the current fiscal year for the federal government, which ends in October.

“[We’ve seen] 300,000 got-aways this fiscal year,” he said “That’s shattering all records. That’s 300,000 individuals that have snuck into the country, gotten past, our front-line defenders, and made their way to every town, city, and state.”

He stated, “What happens on the southwest border does not stay at the Southwest border. The illegal aliens — right now, [by] this administration — are being released into the United States and being flown to every state in this country.” 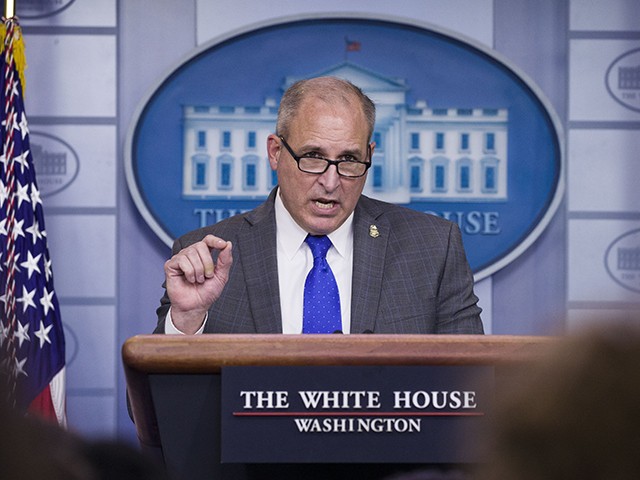 Morgan said the Department of Homeland Security (DHS) is not screening migrants for coronavirus.

He said, “DHS, up to this point, is not doing anything with respect to COVID. They’re not testing. They’re sure as heck not giving out vaccines.”

The Biden administration has released about 300,000 unaccompanied minors, Morgan shared.

“I’m being conservative when I say this administration has released around 300,000 … unaccompanied minors, as well as families into the country. … They’re not testing the families, not a single one,” he added.

Morgan highlighted how lawful travelers — both U.S. and Mexican citizens — seeking access to the U.S. across ports of entry along the southern border are subjected to greater travel restrictions than migrants illegally crossing the U.S.-Mexico border.

He concluded, “Right now, a family can walk up — illegally enter our borders — walk up to a Border Patrol agent, a family of four [or] five and say, ‘Hey, I just walked into your country, and oh, by the way, we all have COVID.’ Guess what they’re going to [say] under this administration? ‘No problem, come on in, we’re going to release you into the interior of the United States.'”