Dr. Kelli Ward, chair of the Arizona Republican Party, called for a canvassing of votes from the 2020 presidential election in all 50 states during an interview on SiriusXM’s Breitbart News Sunday with host Joel Pollak.

Votes cast in Maricopa County, Arizona, should be canvassed in an audit to verify their legitimacy by comparing their identities and methods of voting with their associated voters, Ward held. She also called for submitted ballots to be verified by cross-referencing their linked voters to voter rolls. 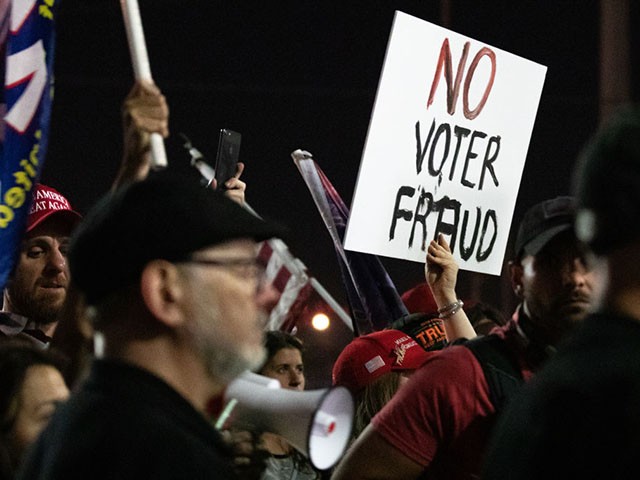 A no voter fraud sign is displayed by a protester in support of President Donald Trump at the Maricopa County Elections Department office on November 4, 2020 in Phoenix, Arizona. The rally was organized after the vote narrowly turned for Democrats in the presidential and senate races. (Courtney Pedroza/Getty Images)

She went on, “What’s been done on the ground here in Arizona by a grassroots organization is just that. Now, they’ve only canvassed about 4,600 people in Maricopa County, but with that, they found thousands of people who they knocked on their door and said — ‘Hey, Mr. Jones, did you vote?’ —  ‘Yes, I did.’ — but there’s no record that that voter ever had their vote counted in the 2020 election. They also knocked on other doors looking for Mr. Jones, but Mr. Jones didn’t live in that particular place, and that vote from Mr. Jones actually had counted, That’s ridiculous. Our attorney general has the power to do a full canvass of Maricopa County — and in fact, all of Arizona — and it must be done to show what happened in 2020 and to assure that it never happens again.”

She remarked, “In Arizona, we did find large-scale fraud. We found over 23,000 ballots that were cast by people who didn’t live at those addresses , and that was a conservative estimate. … [These were] people that did not have the same last name of anyone living in that home, because they said there are some kids who go to college, but they still use that same home address. These are people that are not living in those homes, at all.”

“The top line media spin from the left [and] from the propagandists — that want you to think that Joe Biden is a legitimate president, and that the people that are serving with him are in a legitimate administration, not an illegitimate regime — is crazy, because they’ve recounted fraudulent votes in an effort to pretend that he actually won the election in Arizona,” she stated.

She continued, “There are over 23,000 votes from people who moved from their addresses [and] did not live where they were supposed to [and] where they were registered to vote — maybe not even in our state any longer — who cast votes that were counted. There are thousands of people who are listed as having voted, but don’t exist on the voter rolls. There are lost votes. There are ghost votes.”

The five members of Maricopa County’s board of supervisors “who certified this election are going to go down in history as certifying an uncertifiable election,” she added. 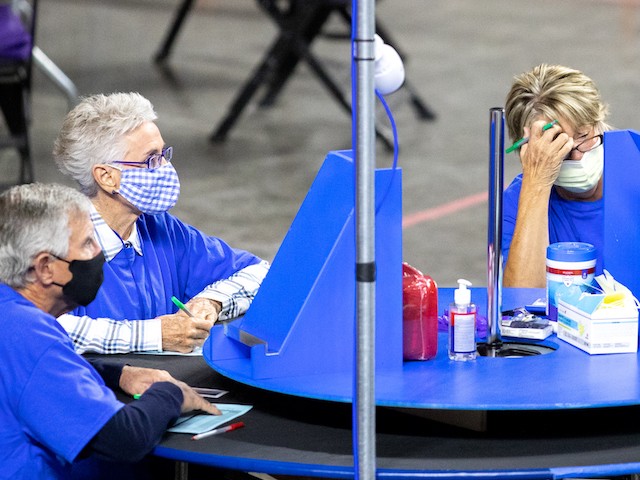 Contractors working for Cyber Ninjas, who was hired by the Arizona State Senate, examine and recount ballots from the 2020 general election at Veterans Memorial Coliseum on May 1, 2021 in Phoenix, Arizona. (Courtney Pedroza/Getty Images)

Ward highlighted Oregon’s changes to voting laws, ostensibly to prevent transmission of the coronavirus, as an example of “fraud by mail.”

“[Democrats] have perfected the art of fraud by mail,” she said. “There are numerous –hundreds, thousands, tens of thousands — of addresses with more than ten voting age adults registered, supposedly, to vote. There are hundreds [of addresses] with over a hundred [people registered to vote], and there are even some with over 300 people registered to vote at one address. It’s simply impossible, but the way the laws are written in Oregon allow that perfection of cheating by mail, and then we codified that with the COVID crisis.”