The Kimber Ultra Carry II (Two-Tone) is a light-weight, compact 1911 with a three-inch barrel and unbelievable accuracy. The combination of the potent .45 auto caliber and the fact the every aspect of the gun is carefully designed for everyday carry makes one wonder aloud, Does this handgun represent 1911 concealed carry perfection?

The Ultra Carry II (Two-Tone) boasts as steel slide and stainless steel frame. The gun weighs 25 ounces unloaded so it is small enough to be a truly compact 1911 yet big enough to give that feeling of certainty that comes from wrapping your hands around the handle of a 1911 in that moment when your life might be on the line. 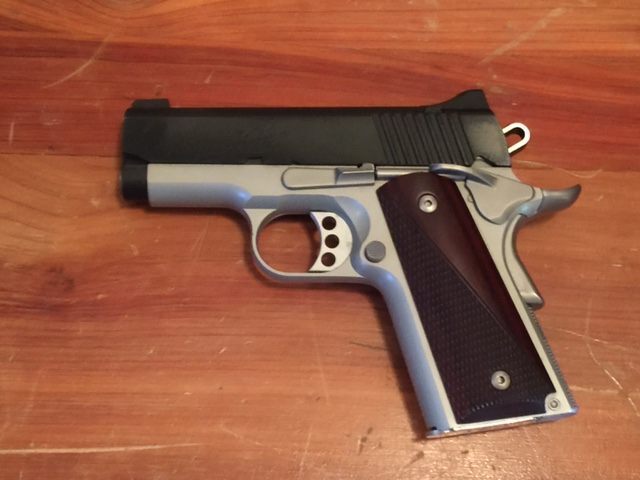 It holds seven rounds in the magazine, plus one in the chamber. And extensive shooting by Breitbart News demonstrated that the gun operates flawlessly with any ammunition or combination of various ammunition makes and brands. We loaded magazines with +P self-defense hollow-points, others with full metal jacket target ammo, and others with bullets loaded in various casings—brass, steel, aluminum. We even loaded magazines with a mixture of all the different kinds just trying to find a way to make the gun malfunction. No such luck.

The gun operated without a hiccup no matter what.

And the accuracy of the handgun proved exceptional. Our Ultra Carry II (Two-Tone) was fired by ex-military, sheriffs, and regular, everyday shooters alike, and all came away impressed by how they were able to shoot the weapon the first time they pulled the trigger.

Speaking of triggers, the trigger on the Ultra Carry II (Two-Tone) is remarkable. It feels so good that people who shot the gun actually commented on the trigger pull when handing the gun back after emptying the magazine.

The Ultra Carry II (Two-Tone) is priced around $830-$850, so it isn’t cheap. But if you are looking for one 1911 that is fun to shoot on the range and can be left within arm’s reach for home defense night—while remaining compact enough to be carried comfortably for self-defense throughout the day—the Ultra Carry II (Two-Tone) may be the gun you have been waiting for.