Raiders head coach Jon Gruden has resigned from his position after the revelation of controversial past emails in which he made several racial and misogynistic emails.

“I love the Raiders and do not want to be a distraction,” Gruden said in a statement Monday night. “Thank you to all the players, coaches, staff, and fans of Raider Nation. I’m sorry, I never meant to hurt anyone.”

Raiders assistant Rich Bisaccia is expected to take over head coaching duties, according to ESPN. 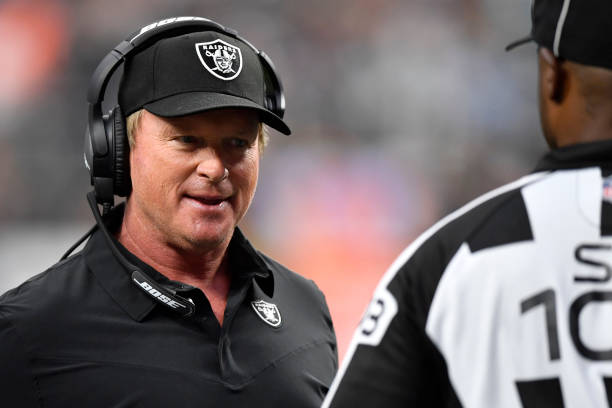 The NFL sent the Raiders additional Gruden emails to review, on top of the one about NFL Players Association executive director DeMaurice Smith that surfaced last week, and others Gruden recently confirmed to ESPN, sources told Schefter on Monday.

According to The Times, Gruden sent emails to Bruce Allen, then the president of the Washington Football Team, and others during a seven-year period that ended in 2018.

Gruden emailed Allen that NFL commissioner Roger Goodell should not have pressured then-Rams coach Jeff Fisher to draft ‘queers,’ referring to former defensive end Michael Sam, a gay player drafted in 2014, according to The Times. The Times also reported that Gruden used an anti-gay slur in several instances while referring to Goodell, and used offensive language to describe some owners, coaches and media members who cover the league.

ESPN, Gruden’s employer at the time the emails were sent, issued a statement rebuking the former broadcaster for his remarks.

“The comments are clearly repugnant under any circumstance,” ESPN said in a statement.

“Dumboriss Smith has lips the size of michellin tires,” Gruden reportedly wrote in reference to NFLPA President DeMaurice Smith, who is black, in one of the emails. 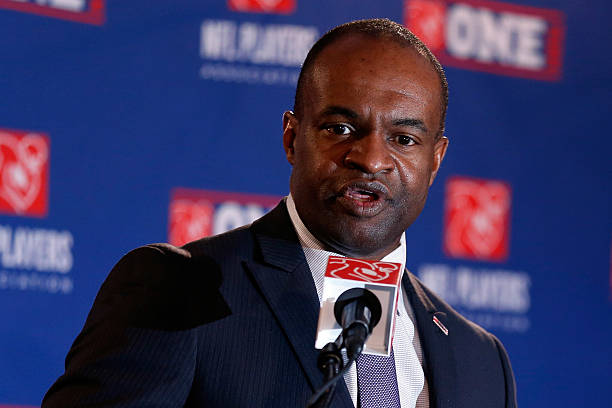 NEW ORLEANS, LA – JANUARY 31: DeMaurice Smith, Executive Director of the National Football League Players Association, addresses the media at the NFL Players Association annual state of the union press conference in the media center on January 31, 2013 in New Orleans, Louisiana. The Ravens will take on the San Francisco 49ers on February 3, 2013 at the Mercedes-Benz Superdome. (Photo by Scott Halleran/Getty Images)

When asked about the comment, Gruden said he often refers to people as having “rubber lips” when he believes they are lying.

Gruden was 22-30 since returning t the sidelines as Raiders head coach in 2018. Gruden’s first head coaching job was also with the Raiders. A job he held until 2002 when left to take over the Buccaneers.