An inter-gender MMA bout has left fans horrified after male fighter Piotr ‘Mua Boy’ Lisowski gave a vicious beatdown to female fighter Ula Siekacz at an event put on by MMA-VIP at a hotel in the Polish city of Czestochowa on October 29.

“The woman unable to move or defend herself while the man rained down punches on her,” the Mirror reported.

Video of the second round shows female arm wrestler and fitness instructor Siekacz on her feet taking blows from male Lisowski, until he grabbed her and threw her to the ground using one arm, attempting a submission hold as she punched him repeatedly on and around his head. Lisowski easily took control, straddling Siekacz in a full mount and beating her in the face and head until the referee stopped the fight. Lisowski won by TKO.

Lisowski, who is described as a “beauty brand ambassador” and calls himself “185cm of pure sex” wore eye makeup during the fight against his female opponent:

“That intergender mma fight was disturbing to watch omg,” one user posted on Twitter.

“How was this sanctioned? This is horrific,” another said.

A promotional poster for the event shows two inter-gender fights, as well as the standard male vs. male contenders: 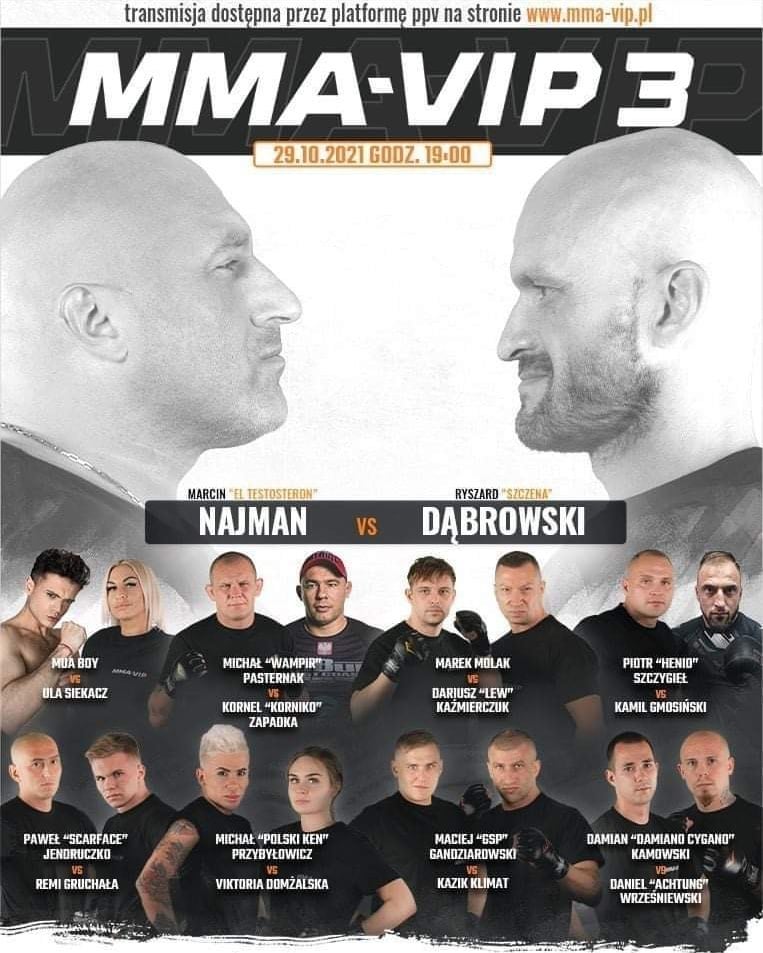 The trend of watching men fight women in the MMA ring began with Fallon Fox, a father and former trucker who had sex-reassignment surgery in 2006 to become female during a trip to Bangkok, Thailand. Fox ended female fighter Erika Newsome’s professional career in 2013 when he held her head in his hands and delivered a knee to her chin, after which she dropped unconscious to the mat.

“I’ve fought a lot of women and have never felt the strength that I felt in a fight as I did that night,” Brents said of her beatdown from Fox. “I’ve never felt so overpowered ever in my life, and I am an abnormally strong female in my own right.”

During a 2013 episode of the Joe Rogan Experience, host and MMA commentator Joe Rogan said of Fox:

She has to fight guys. First of all, she’s not really a she. She’s a transgender, post-op person. The operation doesn’t shave down your bone density. It doesn’t change. You look at a man’s hands and you look at a women’s hands and they’re built different. They’re just thicker, they’re stronger, your wrists are thicker, your elbows are thicker, your joints are thicker. Just the mechanical function of punching, a man can do it much harder than a woman can, period.

UFC superstar Ronda Rousey also spoke out against Fox, telling the New York Post in 2013, “She can try hormones, chop her pecker off, but it’s still the same bone structure a man has. … It’s an advantage. I don’t think it’s fair.”

In a bizarre twist in the world of inter-gender MMA, female Russian fighter Darina Madzyuk defeated 529-pound male fighter Grigory Christyakov in a vicious ground-and-pound during a bout in November 2020 that led to her picking up a multifight contract with Bellator. Watch the unbelievable video here: