In another interview with Pat McAfee, Green Bay Packers quarterback Aaron Rodgers talked about how few “f*cks” he has to give about critics and how liberating it is to just be yourself.

Rodgers makes regular Tuesday appearances on Mcafee’s podcast, and each time he has appeared, he has angered his critics a bit more. Tuesday’s appearance was no different.

Indeed, on Tuesday, Rodgers blew off the critics saying that he does not care what they think.

“It really comes down to giving less fucks & that’s what I’ve tried to do the last couple years,” he told McAfee, adding, “there’s a lot of joy in being unapologetically yourself.”

"It really comes down to giving less fucks & that's what I've tried to do the last couple years.. there's a lot of joy in being unapologetically yourself" ~@AaronRodgers12#PatMcAfeeShowLIVE pic.twitter.com/YmrripWVGO

As if to prove his point, in another interview on the same day, the NFL star pointed out that he has a book on his shelf by objectivist author Ayn Rand — an author the left attacks as a conservative philosopher.

As if on cue, left-wingers jumped to Twitter to express their outrage that Rodgers would have been proud enough of owning a copy of Rand’s Atlas Shrugged.

But Monday was only one entry in the long series of days during which Aaron Rodgers infuriated the left.

Last week, Rodgers and Fox Sports reporter Erin Andrews were blasted for hugging after a socially distanced interview after the Packers defeated the Cleveland Browns, 24-22.

That same week, Rodgers upset vaccine zealots for saying that the country was devolving into a two-class system, one where the vaccinated can go about freely, and another where the unvaccinated are treated as second-class citizens. 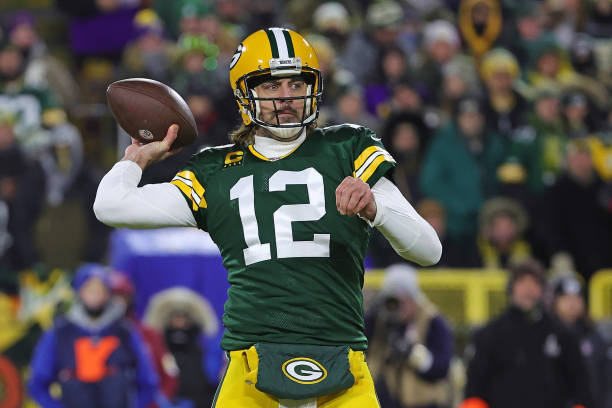 GREEN BAY, WISCONSIN – JANUARY 02: Aaron Rodgers #12 of the Green Bay Packers drops back to pass during a game against the Minnesota Vikings at Lambeau Field on January 02, 2022 in Green Bay, Wisconsin. (Stacy Revere/Getty Images)

The NFL star also said that people who say science cannot be questioned are pushing “propaganda,” not real science.

Leftists were also triggered when Rodgers bucked the vax pushers by saying that the discussion about the coronavirus should be about health, not just about whether someone has or hasn’t been vaccinated.

And liberals were also infuriated when Rodgers got only a $14,000 fine for violating the NFL’s COVID protocols in November, especially after he spent the month previous telling everyone that he was “immunized” against the virus — though not actually vaccinated.